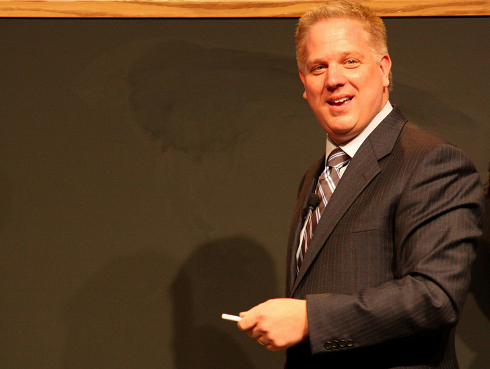 They say what has been seen can’t be unseen, that once you know the truth, you can’t unlearn it. That was before I saw The Glenn Beck Program.

It started innocently enough. I am a journalism student. One of my professors was invited to talk about liberal-media bias on a special episode of Beck’s show. She wasn’t interested, but I was. I’d seen clips of Beck and had to know more. I made arrangements to see him live.

About 20 college-age folks were waiting in the lobby of Beck’s studio in Los Colinas when I arrived. We’d see two episodes of his show that day. One would air live; the other, about media bias, would be taped and shown a few days later.

Security was tight. We’d been warned that cameras would be confiscated and images deleted. I had a digital voice recorder. We had to empty our pockets and raise our pants legs so security could check for shivs. It seemed excessive, but that was before I understood the forces arrayed against Beck.

In the studio, Beck greeted us: “Hey, you guys really want to be journalists? Have you had your heads examined?”

He asked if we’d heard of The Road We Are Traveling, a 1942 book. In it, Stuart Chase describes his plan to “transform America.”

“With progressives, words have meanings,” Beck said ominously. He reminded us of Obama’s radical campaign pledge to “transform America.”

Chase’s plan involved “subsidized labor” and abandoning the gold standard. He didn’t care if people called it “socialism” or “liberalism”; in fact, this plan was called “PSX” for “political system X.” Words were meaningless.

Past tense. Words had meanings again. Beck sees the hidden patterns in everything, like the mathematician in A Beautiful Mind.

He turned to his trademark chalkboards, which held two lists of words: nouns  like transportation and media and verbs like coerce and compromise. We were invited to connect column A to column B. How has transportation been co-opted? How has faith been compromised? Words had meanings, kind of.

Each of these seemingly unrelated topics drew us closer to the inevitable, horrifying truth.

“It is no longer time to chase progressives,” Beck said. We were too late. “It’s time to start studying communists.”

Beck prepared us for the coming apocalypse. We should stockpile food, get “pure” information, and “live off the grid,” no doubt with obvious exceptions for web TV programs.

He spoke of the origins of paper currency and of the time  when tulips were used as currency in the Netherlands.

“Would you sell your house for a tulip?” No one would. The folly of leaving the gold standard was exposed. From there it was a simple matter to connect electronic currency to the End Times.

In the second hour, we learned to survive as journalists in a liberally biased world. I should have known the prognosis would be grim.

About then, a staffer discreetly confiscated my voice recorder. He said I could collect it after the show.

Beck continued to answer questions we’d been asked to submit in advance. When asked why the media doesn’t cover domestic abuse more, he seemed perplexed.

“I have no idea how the media makes the decisions they do,” he said. “That’s why I got out.” It was a strange thing to say to the camera in a television studio, but he was serious.

“Most times you’re just chewed up and you’re co-opted by the time you get there,” he said. “Get out. Do something else. Mentor your replacement.”  I wondered who would tell our replacements’ replacements to get out.

My digital recorder was returned, and afterward I was asked by a worried-sounding staffer what I was doing and whom I was writing for.

Outside, I checked the recorder. The files were gone. I can’t say they were deliberately erased. Maybe I pressed the wrong button. Then I remembered something Beck had said, fatalistically.

“At best I’m erased from history. At worst I’m a villain.”

T.S. McBride is a University of North Texas journalism student.