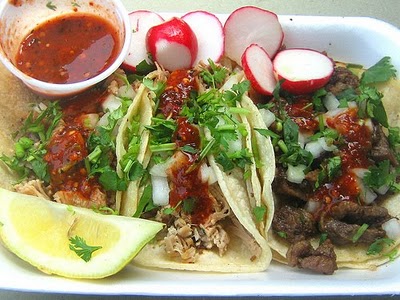 My car knows where to find hole-in-the-wall Mexican food. It’s like one of those pigs that can find truffles, or a salsa divining rod. This time, though, it pointed its hood ornament not to North Main or South Hemphill streets, but east — toward Tex-Mex territory I’d often intended to explore.

East Fort Worth, near Riverside Drive and Sylvania Avenue, is thick with blink-and-miss-them storefront Mexican and Tex-Mex joints. None of the three places I went to knocked my socks off, but none of them sucked either.

The first, and best, stop on my Eastside taco crawl was Tortilleria La Nueva Rio Grandense (831 Sylvania Ave.). The first thing that struck me about the place was the conveyer belt tortilla-maker. They make their own tortillas, chips, and several different kinds of salsas. I fell in love — but it was to be a bumpy affair. I can forgive a lot of service issues at holes-in-the-walls, so when two of our three entrées came to the table cold, I withheld judgment. It was an easy fix.

Once my beef bistek ($5.50) with potatoes was reheated, it was a spicy, runny-nose-inducing gut punch, in which jalapeño pretty much drowned out any other flavor notes. Conversely, the bistek a la Mexicana ($5.50) that my friend ordered was a balanced, flavorful dish with just the right amount of spice. The goulash-looking plate was more of a red hue, whereas mine was all green. Lesson learned: Spice cowards should trust the color wheel. All of the house-made salsas were good-not-great. The consensus among my guests was that the salsa verde was the tops.

Next stop was a place that came with a key recommendation — from a friend’s hairdresser, who works just up the street. El Puerto Mexican Restaurant (2700 N.E. 28th St.) wasn’t mind-blowingly good, but I certainly would go back. The tacos de cameron ($10.50) were garlicky and gooey with melted white cheese. The dish is served with a why-bother salad and stock-heavy rice. The cheese chile relleno ($8.25) was drowned so deep in a yellow “cheese sauce” that it was hard to taste the poblano pepper and Monterey Jack filling. Still, if too much cheese is the worst of its problems, we’re doing OK. The salsa and chips were excellent, if gringo-friendly in spice.

The last stop on my binge-de-los-Mexicanos was Mica’s Restaurant (801 N. Sylvania Av.). Mica’s is so hole-in-the-wall, it borders on cliché. Located in a decent-sized building, the dining room is tiny, and when I visited, completely empty. After I navigated the language barrier, the food started to flow. The tostadas de ceviche ($1.75 each), made with catfish and baby shrimp, were a little too mushy and didn’t taste fresh –– always scary with seafood. But what came next more than made up for it –– the best dish I had in my whole Eastside swing. The torta ahogada ($5.25), or drowned torta, was a sandwich a-swim in a pool of chile sauce, which soaked into the bread. It’s a soggy, beautiful mound of spicy pork. The tacos ahogada ($5.50), with the same tender pork, were served with pickled cabbage and tasty red salsa. They were a little less inspiring, but just as messy.

It’s funny how my Korean-made car knows how to find these Mexican food places. Maybe some of its parts were assembled in Mexico or Tex-Mexico. Whatever the explanation, I’m just happy to be along for the ride.