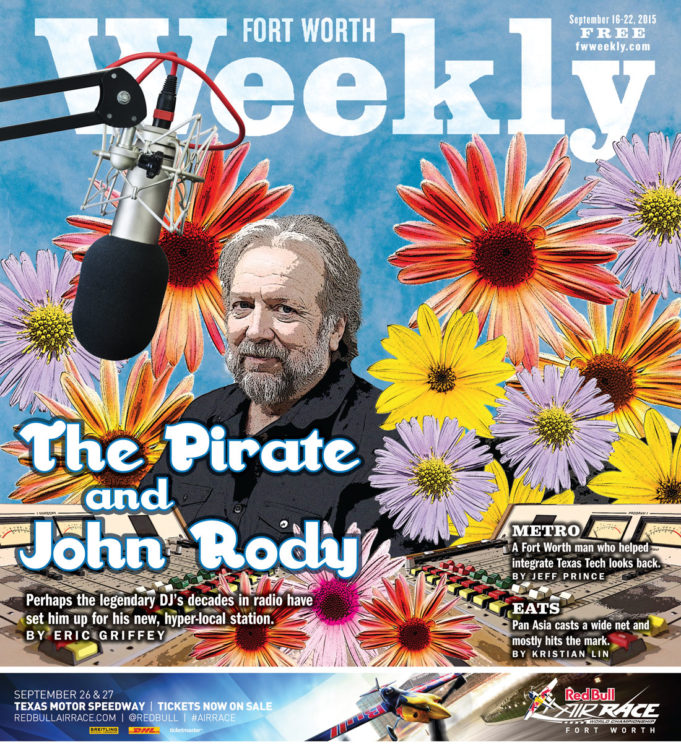 The streets around 501 South Calhoun make the surface of the moon look like Westover Road. The pavement is full of deep craters filled with patches of grass. Though the surrounding South Main Street neighborhood is booming, the redevelopment hasn’t yet reached the area that houses one particular ramshackle two-story industrial building.

In front of the brick bunker-esque box, a man with a silver mane and beard wearing a tie-dyed t-shirt is screwing together two parts of a graphite telescopic antenna.

“The military uses these to detect poisonous gasses,” said John Rody, fitting together more pieces of the 40-foot beacon.

The antenna would later be mounted on an abandoned elevator shaft on the building’s roof. When the signal is turned on during a fundraiser at The Live Oak Music Hall & Lounge on Saturday, the repurposed military equipment will propel Tarrant County music as far as the Mid-Cities –– The Pirate has been only an online station up to this point. The basement will be the epicenter of what will be one of the most ambitious and rebellious radio stations in the country.

A couple of years ago, Rody and wife Sallie launched their nonprofit station spinning exclusively music created by Fort Worthians. The mission was, and still is, to provide media access to all citizens. And thanks to a little-known 2010 law, the Rodys were able to carve out their very own spot on the FM dial, 97.5.

North Texas audiences have known Rody for more than three decades. As the deadly funny half of The Morning Zoo with John LaBella and John Rody on KZEW, he still has a ton of loyal fans. From the late 1970s to the mid ’80s, Rody was a media celebrity in North Texas, when being a successful FM on-air personality meant you were part tastemaker, part entertainer, and, to many, all icon.

George Gimarc, who worked with Rody at the Zoo and would later go on to start KDGE/102.1-FM The Edge (then on 94.5-FM), said that Rody was always more concerned with integrity than celebrity.

“I find it really neat that out of all of the people who went through that radio station, he decided…he wasn’t going to be a part of the machine anymore,” he said.

The Pirate is launching at a time of great turmoil and homogeny in the radio world. After deregulation in the ’90s, a handful of corporations own the vast majority of the country’s terrestrial spots on the dial.

“It’s a counterbalance to what the corporate tyranists have done to radio,” said Rody, who speaks through a devilish smirk as though he’s permanently setting up a punchline. “If you go to the Clear Channel building [in Dallas], the quintessential sausage factory, there are nine [or more] studios lined up in a row. In Clear Channel parlance, they call that a cluster.”

He calls The Pirate “radio deconstructed.”

“Anything that broadcast radio has ever done for me or to me, we’re not doing it,” he said. “We’re the station where you tune in at 2 in the afternoon, and you hear someone reading poetry or playing solo flute selections.”

Mike Rhyner, who was the producer for Labella and Rody and now hosts The Hardline on Sports Radio 1310 The Ticket, said that if anyone could pull off something like The Pirate, it’s Rody.

“In my 35 years or so in the business, there are two people that I can say, ‘I’ve never seen anything like that guy,’ and he’s one of them,” he said. “If anybody thinks this is a good idea, they should know and understand that the right guy is doing this.”