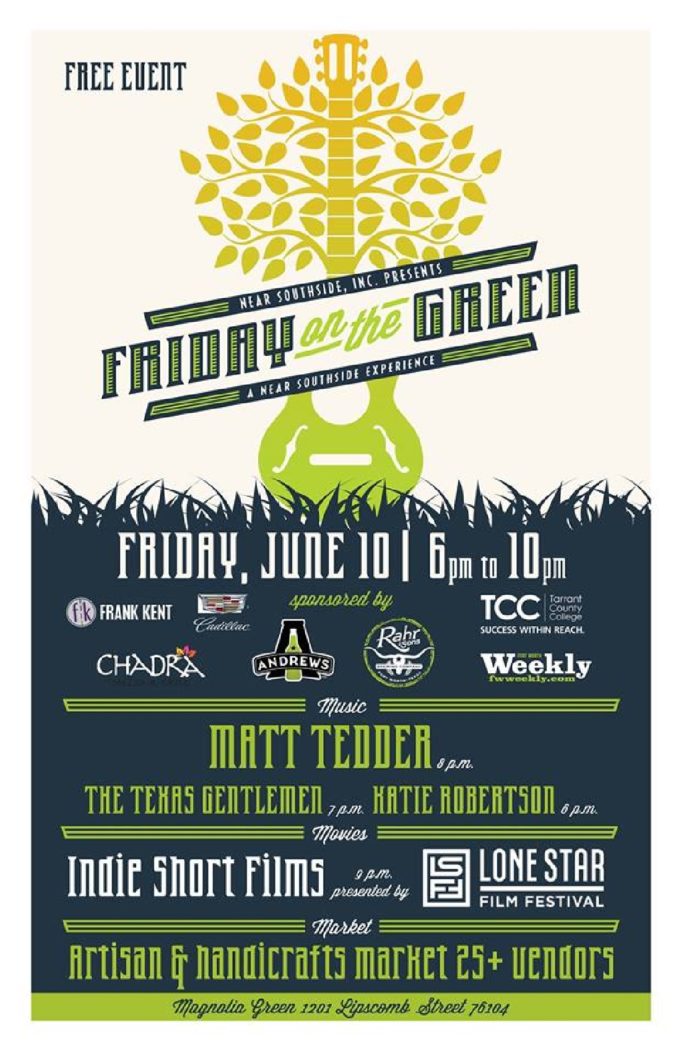 1) This month’s Friday on the Green is headlined by Matt Tedder, who, like Luke Wade before him, appeared on the radars of moms around the nation (“Do you know Matt Tedder?” asked my mom sort of recently) by his appearance on The Voice this year. The Aledo native has been called a “young Keith Richards,” and while I don’t really hear the comparison beyond “guy who is good at guitar” and “guy who draws from the same Nashville stylistic well as Keith Richards,” but he got on the show for a reason. He plays at 8, with the never-not-playing-somewhere, have-guitars-will-travel backing band the Texas Gentlemen at 7, and Katie Robinson (herself a prominent local accompanist who is mucho talented at singing while playing the piano) starting the show off at 6. But wait! THERE’S MORE!

Besides the bands playing, there’s an Artisan Handicrafts Market from 6-10pm. Lovingly handcrafted goods and other knickknacks are available for purchase along with food truck food and craft brewery beers; after the music, Lone Star Film Society kicks off its summer movie series with four short films (including The OceanMaker, an animated short about a young female pilot fighting sky pirates!) from 9pm to 10pm. Honestly, if a similar Friday night activity had been available when I was a kid, I would have begged my parents to take me to this. Also: it makes me sad to think that the following video might be taken sincerely by someone captivated by the concept of “artisanal spam.” When it comes to craft culture, I’m finding it increasingly more difficult to tell the difference between what is earnest and what is joke. I guess that’s a good thing? You tell me:

2) Mean Motor Scooter rawks the Grotto on Friday night, with another power trio, Moon Grave opening, and veteran area-rocker super group Caliche Burnout starting the show. This is a good show if you like to hear loud, punk-influenced rock ’n roll and ogle other musicians guitars and amps. There’s a video for a Mean Motor Scooter song called “Monsters,” but I’d rather include the one for the song “Bad Motor Scooter” by the band called Montrose, aka that band Sammy Hagar used to be in:

3) The Boiled Owl Tavern hosts Austin’s Rattlesnake Milk and local folk- and country-influenced songwriter Wayne Floyd Saturday night. Rattlesnake Milk lists “cowpunk” as an applicable genre to their sound, so if you happen to miss Holy Moly at Lola’s Trailer Park on Friday night, head to Magnolia for a band that mines similar sonic fields. See what you think with this Rattlesnake Milk video, filmed at a club in Lubbock:

4) Dreamy Soundz and Lo-Life Recordings are releasing their third joint-label Group Therapy compilation at Shipping and Receving on Sunday, packing 19 bands onto outdoor and indoor stages. These shows are always a party, in no small part due to the members of the featured bands, most of who are huge fans of partying themselves, and who are probably in each other’s bands, anyway. Entry is $15. That might sound steep to the broke, cheap, and/or shady, but you get a free Group Therapy Vol. 3 tape and download card while supplies last. Highlights for me, personally, in order of appearance: Teenage Sexx at 3pm, Tame Tame and Quiet at 4:30, Vincent Neil Emerson at 5pm, Toy Gun at 7:30, the Fibs at 8, and Loafers at 9. The late-evening heavies toward the end of the show include Vicious Firs, War Party, and FOGG, with Jake Paleschic batting clean-up at 11pm. Check out this Toy Gun at the Chat Room video:

5) If you’re looking for something to do Monday night and would like to pay money to hear cover songs in a really classy venue, the Kessler is putting on Don’t Forget Me: A Night of Nilsson. As the context clues hopefully suggest, local musicians (in this case, mostly from Dallas and Denton) will be playing songs written and/or performed by the late, great ’70s hit maker. As I expected, Paul Slavens and Salim Nourallah are involved in this, but I was pleasantly surprised to see the Ticket’s Mike Rhyner among those slated to appear. I’d like to think he does something silly when this group plays “Coconut,” but that song sounds Paul Slavens might have called it as soon as he got the invitation. The show starts at 7pm, and tickets are $15. Here’s Paul Slavens making up a song about Rock, Paper, Scissors at the Live Oak: