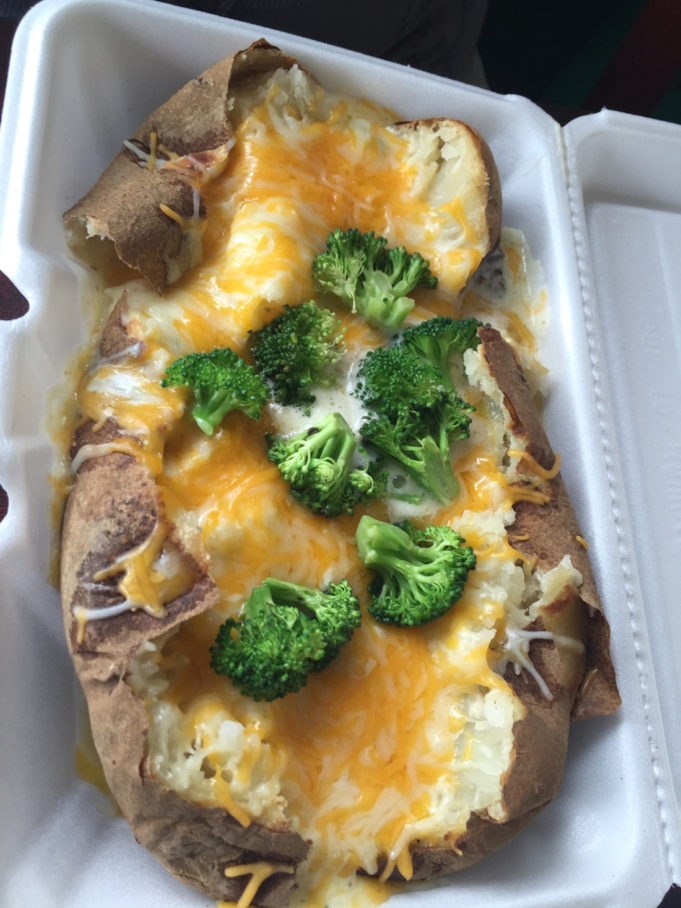 Sitting in the tiny dining room of Spudwinkles Deli (201 W Rosedale Av, 682-224-1263), the newish potato-focused chain that opened in the space recently abandoned by the ill-fated Sombrero Mexican Food on the still-sketchy side of the Near Southside, I tried imagining the script for the employee training video.

In a stereotypically twangy chipmunk voice, the chain’s ridiculous cartoon cowboy potato mascot explains Spudwinkles’ top secret formula to the eager new hires (all of whom swore a blood oath never to give away the complicated recipe).

SPUDS: “Good gosh golly and a big Texas howdy, ya’ll. I’m Spuds, and I’m-a tell y’all all about our potato-flavoring process. First, we start with an unnaturally big potato, one about the size of a Russian nuclear sub, and we soak it in butter for 42 days –– that’s enough time for the little morsel to soak in enough butter to kill a baby llama.”

CUT to an attractive woman in a red collared shirt dropping what looks like a premature baby into a white plastic tub. She smiles at the camera.

CUT back to SPUDS: “Then we pick an ingredient –– chicken, for example (SPUDS grabs a cartoon chicken by the neck as its eyes cross), and we put pieces of it on top of the potato, then slather in so much cheese you can’t taste either the potato or the chicken.”

CUT to the woman dumping a bag of shredded cheese over a glistening potato.

CUT back to SPUDS: “And now you know the secret! Just swap out ingredients, and give it a clever name. Your training facilitator will be coming by shortly to chip you, so you can never run away.”

FADE OUT INTO FLAMES.

As soon as you walk in the door of Spudwinkles, you’re at the counter. The place is a shoebox with tables, but it’s clean, bright, and inviting nonetheless.

My guest and I started with the Whiz-Bang Chili ($2.99), a greasy pool of flavorful chunks of beef, topped with diced red onions, and, you guessed it, a kiddie pool portion of cheese.

The menu has more than just potatoes, but everything on it still has a gimmicky name. You can order from the “Kickadillas” section or from “Awesome Pastas,” “Ginormous Spuds,” “Spudwinkles Paninis,” or the disappointingly mundane “Classic Deli Favorites.”

We went straight for the starch. The Broccolicious ($7.29) was topped with the kitchen’s broccoli cheese soup, a blend of cheddar and Monterrey Jack cheeses, and about four florets of broccoli that looked like the answer to a game of “Which One of These Things Doesn’t Belong?” The whole thing tasted like cheese.

The COWch Potato was pretty much the same thing, but instead of the soup and veggies, it contained rubbery strands of brisket and a sauce with all of the tanginess of those ice chips you get at a hospital when you’re not allowed to drink or eat. It also tasted like cheese.

Here’s the real punchline: Spudwinkles was pretty darn good. Yes, it’s simple fare, and if you eat there more than twice in the same week, you’ll probably get diabetes. But sometimes you just want to pig out.