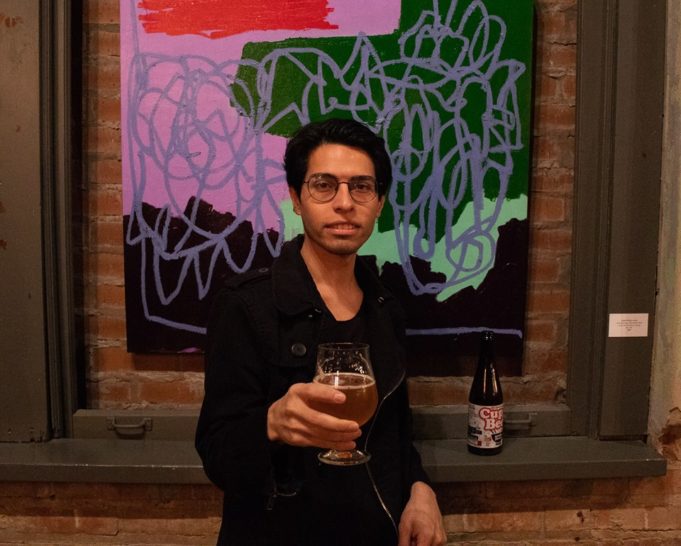 Ronnie Heart lives without creative boundaries. His reputation remains solidly as a rock/pop musician and in-demand DJ. But his muse often stumbles into fashion and painting. Or whatever strikes his interest.

We met up at The Collective Brewing Project to chat over brews. The Near Southside brewpub recently celebrated its 4th anniversary. Heart opted for Cup O’ Beer, a ramen-based ale that went viral last year, and an IPA (Sempre Fi).

“Phew,” he said as he sipped the Cup O’ Beer. “That’s pretty tart. I sense how special it is for sure.”

Heart has simplified the art of ordering beer into three words: tap, local, and light. The light part began to make sense as we tried the IPA. Normally, he said, he doesn’t drink IPAs. But he basically liked the Sempre Fi.

“Years ago,” he said, “I questioned the whole IPA thing. Why does it exist?”

Heart’s second album is having a longer gestation period that most would have guessed. Followers of his live shows have heard select new songs, though. It’s not that he’s trying to keep the 817 enticed by holding back the release. Finding the right sound just takes time.

“Everything is getting closer to being finished,” he said. “Sonically, it’s not there yet. I’ve been going out there with [unconventional] melodies and chords. Some of the things will be wacky and showcase my goofiness.”

Working that musical muscle takes many forms for him. Delving into pop and avant garde music fills much of his day. As does singing. When he’s recording at night, he’ll try something off the wall. Heart is a student of music history. His interest in pop culture goes beyond rote memorization of album titles. How artists dressed and presented themselves are equally important fodder that can be referenced back to.

“My favorite artists are people who have explored these things,” he said. “You can hear that they’re referencing this jazzy funk band from Japan, for example. Or that this fashion artist is referencing stuff from the early 80s. Some of it does play into pop culture.”

When Heart isn’t recording or dee-jaying, he’s usually at an art show or hanging out with the people who made the art. We ended our chat with a quick Q&A.

Why not capitalize words?

It depends how they feel on the skin. I’m big about socks. I’ve been buying the same brand of socks for a while. Feet have enough to complain about. Treat them right.

If you could smell like anything for the rest of your life, what would it be?

If you own a company that makes margarine, is it fair to say that you are marginalizing your customers?

I think you’re asking this because I like puns. Is this going to be a one- or two-page spread?

Is veganism a fad or the future?

I hope it’s the future. That’s a life choice to commit to. For me, with my way of life, it feels beautiful to me.

Yelp, is it overrated?

Well, I use it a lot. My most searched word is vegan.

If you could rename Fort Worth, what would you change it to?

I think Funkytown is a really cool name.

From Off the Record: Join us every First Friday for FORTISSIMO with Ronnie Heart dee-jaying all night long. Visit the event page here.

From Heart: It’s time for the most wonderful party of the year! Join us December 12th for housemade hot cocoa and Christmas tunes from DJ Ronnie Heart! We may even have a surprise guest so bring your own mug and let’s party! Visit the event page here.

Poppin Holla-Day Pop Up with Ronnie Heart at MASS

From Heart: This event will have 20-plus vendors selling holiday-inspired arts and crafts, gifts, decorations, and beyond! Come sit on Santa Tony’s lap and take a festive photo. Down to Earth Vegan and Vegetarian Food Truck will be on site. Bouncy grooves by Ronnie Heart. Visit the event page here.