Home Film Film Reviews Dream Supreme
SHARE
Facebook
Twitter
When Dreamgirls debuted on Broadway in 1981, it won over an entire generation of theatergoers, African-American and not, with songs by Henry Krieger and Tom Eyer that skillfully evoked a wide range of black music through recent history (blues, doo-wop, Motown, soul, funk, disco, and even early rap). The show also spawned several imitations, including Robert Townsend’s 1991 movie The Five Heartbeats, a decent male-centric rip-off. It has taken 25 years for the show to reach the big screen properly, but the splashy film version on screens this week makes the wait well worth it. 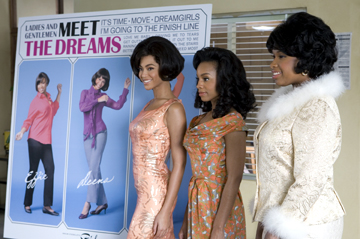 The girls in the title start out as The Dreamettes, three lifelong friends from Detroit who form a singing group in the early 1960s. They come up losers in a local talent show when we first see them, but their big break is in store anyway. Curtis Taylor (Jamie Foxx), a car salesman who wants to be a music mogul without kowtowing to the white man, signs up The Dreamettes as backup singers for R&B star James “Thunder” Early (Eddie Murphy). When James’ womanizing and drug use make him unreliable, Curtis separates the group from him, renames them The Dreams, and launches them on their own career. They churn out hit after hit for him, yet Curtis is so obsessed with their success that he winds up selling everyone out. His main victim is Effie White (Jennifer Hudson), his girlfriend and Dreams’ lead singer, whom he abruptly replaces in both capacities with prettier and less talented Deena Jones (Beyoncé Knowles).

Writer-director Bill Condon is no stranger to musicals, having penned the script for Chicago. Either he has taken a page from that movie’s director Rob Marshall, or he was the one giving Marshall notes back then. Regardless, he edits the musical numbers in much the same way, using them to move the plot forward without sacrificing their value as spectacle. Condon doesn’t bring the same acuity and venom to his writing that he brought to Chicago, and for all his efforts, Dreamgirls’ showbiz morality tale doesn’t hold many surprises. Still, his writing is tight enough to make this movie wear its 130 minutes lightly while doing justice to its many plot threads.

Meanwhile, Condon’s direction is solid, though lacking that last ounce of visual inventiveness. Good musicals overwhelm your senses, and his compositions and camera movements never quite rise to the same pitch of excellence as the music, Sharen Davis’ costumes, and Fatima Robinson’s choreography. I can’t help but wonder what a more imaginative director like Bryan Barber (Idlewild) might have done with his script.

The movie has so much else going for it, though, that complaining seems ungrateful. The supporting players alone are enough to make the movie feel full of life. In the role of Effie’s brother and Dreams’ songwriter C.C., Keith Robinson displays a slender, shiver-inducing tenor when he sings lead on “Family.” Former American Idol contestant Hudson lands her first acting role here and absolutely smokes it, carrying The Dreams in the early numbers and striking the right bouncy tone on the light romantic number “Love You I Do.” That’s all before she delivers a fearsome, magnificent performance of the mid-film showstopper “And I Am Telling You I’m Not Going,” which threatens to blow out the movie theater’s speakers.

If the newcomer steals all the scenes she’s in, the same goes double for the veteran Eddie Murphy. It’s fun watching him channel the same music stars that he used to imitate back in his Saturday Night Live days, but it also stings to see him play a fading luminary, especially if you’re old enough to remember him from the 1980s, when he was a thing of beauty. As his character’s career flames out, Murphy shows self-loathing, frustration, and vulnerability that we’ve never seen from him as an actor. He gives the movie some unexpected tragic weight, and his singing, whether it’s on the James Brown-esque rouser “Fake Your Way to the Top” or the Marvin Gaye-like ballad “Patience,” reminds you of what a talented performer he still is.

With all this going on, the two leads have to fight for our attention. Foxx is the weak link in this cast vocally, generating little presence in his two numbers. He gets by on the strength of his conscientious performance as a hard, unsympathetic man for whom the bottom line becomes everything. Beyoncé almost gets pushed to the background too, even though she looks dazzling in all the retro costumes she wears. The Dreams sound noticeably less interesting when she sings lead instead of Hudson, and the movie’s almost over before she rescues herself with a spellbinding solo performance of “Listen,” a lush, discontented ballad composed for the film.

Moments like these are the essence of Dreamgirls, which once again demonstrates the unique power of music to amplify a story. With its graceful writing, opulent setting, and sheer star power, this movie is a ride more exhilarating than the Cadillac car that James Early sings about. Too few movies send you out of the theater singing, but this irresistible piece of pop cinema does the trick.