Home Film Film Reviews Puppy Love
SHARE
Facebook
Twitter
Saturday Night Live has been creating male movie stars for decades now, and for almost as long critics and entertainment journalists have been asking why the show’s women haven’t gone on to similar success. 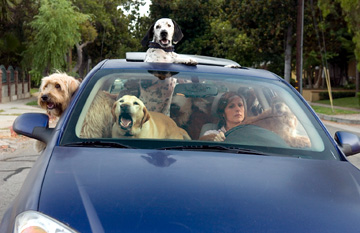 For example, consider Molly Shannon, who spent six years on the program and reliably brought energy (sometimes a bit too much) to her various roles. She headlined one previous movie, 1999’s Superstar, in which her SNL castmate Will Ferrell played second banana to her. Of course, now he’s the one starring in big-budget comedies that draw huge crowds. Meanwhile, Shannon has struggled to find rewarding film roles of any size, and though she did score some memorable laughs in last year’s Talladega Nights, Z-grade movies such as Little Man, Good Boy!, and Scary Movie 4 have been more typical of her post-SNL career.

Now she stars in Year of the Dog, a fairly serious-minded comedy with major talent around her onscreen and behind the camera. It’s the sort of opportunity that Ferrell and other male SNL vets are routinely presented with, calling on her to deliver a subtle dramatic performance as a fully formed character while using her comic skills. I don’t mind admitting that I was pulling for her to come through in this role and strike a blow for gender equality among SNL alumni. I’m far from the only one rooting for her, too, as the wishful thinking seems to have taken hold among my fellow film critics, who have bathed this movie in glowing reviews. Still, it’s my sad duty to report that she falls short.

She plays Peggy, a lonely administrative assistant whose entire emotional life is tied to her dog, a pert-looking beagle named Pencil. One day Pencil eats something toxic and dies, and the sudden bereavement does more than devastate Peggy. It drives her a little mad, and she makes one bad decision after another in the wake of her loss — almost immediately she takes in a new dog, a German shepherd named Valentine, despite being warned that he was abused by his previous owners.

This movie marks the directing debut of Mike White, the screenwriter behind such gems as The School of Rock and The Good Girl. He’s treading a fine line here; on one hand, he wants us to empathize with Peggy’s pain and grief, but on the other hand, he’s also trying to draw laughs by depicting her as a maladjusted pet owner who mistakes dogs’ unquestioning loyalty for moral superiority to humans. A more seasoned director might have struck the right balance, but the writer himself can’t turn the trick. His direction is uncomfortably close to the cinematic style we’ve already seen from Todd Solondz, Wes Anderson, and Jared Hess — frontal compositions, overly bright colors, affectlessly clipped tone, esoteric indie music on the soundtrack. Too often this approach gives his movie a cartoonish feel that works against the psychological complexity he’s aiming for.

Peggy’s love for animals springs from her inability to relate to people, and she has trouble expressing herself in words, as she herself notes in an e-mail message to her friends at the movie’s end. This closed-off quality makes the character extraordinarily difficult to play, and either Shannon doesn’t have the talent or lacks the experience for dramatic heavy lifting like this. Whichever it is, she never really inhabits the role, and plays Peggy’s crazy episodes (which include taking her young niece to a rendering plant and adopting 15 dogs in one day) in a sketch-comedy broad style while missing the neediness that drives her to these extremes.

The supporting characters do make you understand why Peggy prefers canine companionship: a yahoo next-door neighbor with trophy heads on his wall (John C. Reilly), a petty and officious boss (Josh Pais), a co-worker obsessed with snagging a husband (Regina King), and Peggy’s brother and sister-in-law (Tom McCarthy and Laura Dern), who are the sort of horrible doting parents who make all their childless friends want to run to the nearest sterilization facility. As a fellow dog-lover who has an abortive romance with Peggy, Peter Sarsgaard manages to distance himself from his creepy dramatic-actor oeuvre and credibly play a comic foil. These characters serve up some funny moments, but they’re way too self-involved to give any perspective to — or even a tiny glimmer of understanding of — Peggy’s predicament.

One more mark against this movie: Christopher Guest’s Best in Show is a funnier and wiser film about the different ways in which people bend themselves out of shape for their canine companions. Year of the Dog isn’t painful to sit through, nor is it without insight into its dramatic situations. A simple change of director or lead actress might well have turned it into a beautiful small-scale masterpiece. Yet as it is, it’s only an intriguing failure, and the talented Shannon still hasn’t found a movie role that really suits her. The status quo remains unchanged, which is too bad, because the status quo kinda sucks.