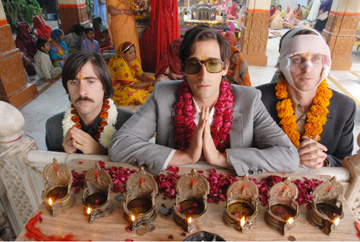 Barely a year later, I witnessed Julia Roberts re-emerge as an A-lister in My Best Friend’s Wedding, at a time when her career appeared to have flamed out. I enjoyed those movies, and they taught me something important: Don’t write off talented people. No matter what kind of bad choices they’d made or what kind of bad press they were getting, their skills meant that they could put together something special, if only by accident. So I keep the faith with Nicolas Cage, Winona Ryder, Lindsay Lohan, Murphy (again), Tim Burton, M. Night Shyamalan, Lars von Trier, and a bunch of others. I pan their movies sometimes — OK, more than sometimes — but I’m always alert to the possibility that in their next venture they might dazzle me like they used to.

That brings me to Wes Anderson and his fifth feature film, The Darjeeling Limited. Some critics have taken this opportunity to declare that they’ve fallen out of love with the erstwhile indie darling. “A work of immaturity” the San Francisco Chronicle said, while the New York Daily News dismissed it as “an ordinary road movie,” and the screening-room chatter from my colleagues here in North Texas has been downright poisonous. It’s not a consensus yet, but the idea is definitely gaining momentum that Anderson’s movies have succumbed to mannerism, preciousness, artifice, and insularity. The pet adjective is “twee” — is there a filmmaker whose movies are more often described with that word? One essay in Slate.com bashed Anderson for his treatment of characters of color, while another one provocatively stated that Owen Wilson was the real genius behind Anderson’s best movies, a disturbing thought with likely more than a scrap of truth to it.

Certainly The Darjeeling Limited isn’t an achievement on the level of the Anderson movies that Wilson co-wrote (Bottle Rocket, Rushmore, and The Royal Tenenbaums). Anderson fans who’ve become used to thinking of each release of his latest film as an event will find themselves disappointed. The Darjeeling Limited also falls short of its overt aim, which is telling the story of three brothers who haven’t spoken in a while and how they reconcile with one another and their futures. However, looking past all that, I was able to find it an agreeable and good-looking little diversion. Much of the action takes place on a fictitious train that shares its name with the movie. Francis Whitman (Owen Wilson) has dragged his brothers Peter (Adrien Brody) and Jack (Jason Schwartzman) along on a trip through India, hoping for some form of spiritual enlightenment. Francis definitely needs it more than the others, having reacted to their father’s recent death by getting his face badly mangled in a car accident.

Anderson is savvy enough to make fun of these white guys for being naïve enough to think they’ll find God just because they’re in an exotic place full of nonwhite people practicing a different religion. His co-writers here are Schwartzman and his cousin Roman Coppola, who reportedly filled the DELETE with situations based on their real-life traveling experiences. These are funny enough, but the characters of Peter and Jack are completely interchangeable in their world-weary ennui. Only Francis provides any spark, exhorting his brothers to make agreements about how they’ll behave and drawing up detailed itineraries for their trip, which are printed out on laminated cards made by his mostly invisible personal assistant (played by Wally Wolodarsky, when he shows up). The Whitmans’ comic misadventures are enjoyable enough until the last 20 minutes or so, when they try to save three boys who have fallen into a rapidly flowing river. The sequence ends with the non-English-speaking villagers paying tribute to these strangers, and while it isn’t wrong conceptually, in execution it feels a bit patronizing. The stuff that happens after that is off, too — the flashback to the boys’ father’s funeral and the Whitmans’ tracking down their mother (Anjelica Huston) in a convent.

Story problems aside, the director’s extraordinary visual talent remains in evidence, as he uses fresh angles and quick camera movements to provide twists on his usual frontal compositions. He’s still really good at filming both slapstick comedy (like when Jack breaks up a train-compartment brawl between Francis and Peter by pepper-spraying them) and action (like the opening sequence when an unnamed business traveler played by Bill Murray frantically tries to catch the train). Sequences like these give hope that Anderson might rediscover his form if he starts reaching for stories outside his own head — his next announced project is an adaptation of Roald Dahl’s The Fantastic Mr. Fox. Of course, I’m holding out hope that Anderson will make a straightforward action thriller, like he was supposedly doing in that funny American Express commercial he made last year. Either way, I await his next move.

Painter and the Thief: Crimes of the Art