Last year, Hot Fuzz came out in the third week of April and turned out to be the funniest comedy of 2007. 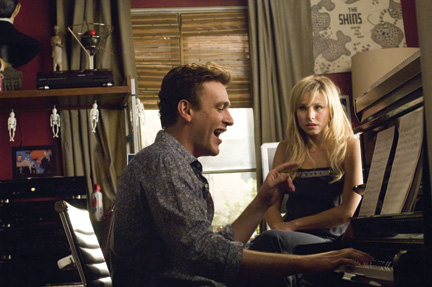 This year, Forgetting Sarah Marshall comes out in the same week, and it turns out to be not just the funniest comedy of 2008 but also the year’s best movie so far. If you removed two-thirds of the DELETE’s jokes, you’d still be left with a pretty decent drama – that’s how good this is. The humor gives piquancy and point to what the DELETE says about love and also makes the movie a hell of a lot of fun.

It begins with one of cinema history’s most memorable breakup scenes. The titular Sarah (Kristen Bell), a B-list Hollywood actress starring in a network TV drama, comes home to her composer boyfriend Peter (Jason Segel) to tell him that she’s ending their five-and-a-half-year relationship because she has met someone else. Now, if I were to reproduce their dialogue on this page, you’d probably find it bland. What makes the scene funny is that Peter receives the news while coming out of the shower, and he’s so distressed that he drops his towel and spends the next several minutes completely naked as he begs her not to leave. “I need a hug!” he says piteously. A grossed-out Sarah obliges.

This scene is a tour de force for the tall, lumpy-bodied, 28-year-old Segel, who also wrote the DELETE. A protégé of Judd Apatow (like the movie’s first-time director, Nicholas Stoller), Segel had a supporting role in Knocked Up, though he’s better known for playing Marshall on the TV sitcom How I Met Your Mother. Much of this movie is based on his own experiences – like Peter, Segel once toyed with the idea of writing a stage musical about Dracula. One of the funnier bits here is when he sings a song from that work, complete with Transylvanian accent. It’s a surprisingly tender ballad, given that it contains the lyric, “Your blood will run down your face when I decapitate you!”

After a superbly depressing montage of Peter having revenge sex with a series of random women, he jets off to a Hawaiian resort to get Sarah out of his head. When he arrives, though, he finds that Sarah’s staying at the same hotel, and she’s with Aldous (Russell Brand), her new boyfriend who’s a buff, shaggy-haired, tattooed English rock star. No wonder Peter’s weeping is loud enough to wake the guests in adjoining rooms. He’s lucky that the hotel staff takes pity on him, especially front-desk receptionist Rachel (Mila Kunis), whom he starts to date.

The DELETE does run into structural problems, but the jokes are good enough that they don’t matter. There’s no reason for Aldous to be thrown together with a hotel guest (Jack McBrayer) who’s having sexual problems with his new wife, but it makes Aldous demonstrate sex techniques with the pieces on a life-size chessboard, which is awesome. Some of Segel’s set pieces are downright astonishing, like a terrifically tense dinner with the four principals, all pursuing their own agendas even though three of them are drunk. The allegiances shift with almost every line – displeased with Sarah, Aldous teams up with Peter to mock a bad horror movie that Sarah acted in. When Rachel comes to Sarah’s defense, the actress repays her with a barb about mainlanders who move to Hawaii to run from their problems. If that’s not enough, their conversation keeps getting interrupted by a hotel waiter (Jonah Hill) with a psychotic crush on Aldous. The scene plays out without any threads being lost, which is a tribute to the filmmakers’ dexterity.

Better still, the characters around Peter are robustly drawn and played that way by the actors. Even if you watched all 16,000 episodes of That ’70s Show, you’d never guess that Kunis was capable of the dry, crisp performance she gives here. Brand makes a hilarious minute-long tangent out of an early scene in which he asks Rachel if she’s seen his missing shoe, and he manages to be convincing as a guy who charms Peter despite having stolen his girlfriend. Even the villain of the piece has human dimensions. When Sarah learns about her show’s cancellation, the resulting scene with Peter gives a glimpse of what they had – he steadies her when her insecurities bubble to the surface, and she’s grateful for it. That scene is bookended by her pained monologue delivering a stinging assessment of Peter as a boyfriend, revealing Sarah’s legitimate reasons for ending things, if not for the way she ended them. Here and elsewhere, Bell is magnificent.

I haven’t even mentioned Bill Hader’s sharp turn as Peter’s best friend, or the competitive sex scene with Sarah trying to make more noise by herself than Peter and Rachel in the next room. As with many great movies, Forgetting Sarah Marshall has more going on than you can catch in one viewing. It’s a strikingly mature piece of writing from the sitcom actor whose twentysomething characters are more grown-up about their relationships than most of the thirtysomething singles who populate Hollywood’s other romantic comedies. Is this movie the Annie Hall of our generation? Could very well be. And Woody Allen never ended a movie by staging a Dracula musical with puppets.