All right, somebody needs to explain the whole Patrick Dempsey thing to me. 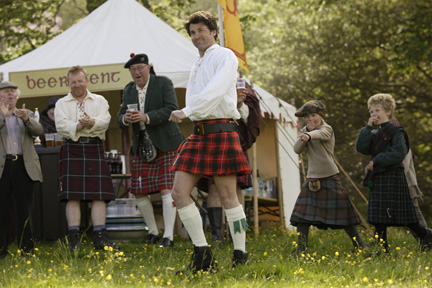 Granted, I’m at a disadvantage because I don’t watch Grey’s Anatomy, but still, what am I not seeing? He’s a good-looking guy who’s not a bad actor. I get that much. Other than that, his sleepy eyes, small tenor voice, and soothing delivery make him an incredibly recessive presence on screen. Of course, we can’t all be alpha males, but Dempsey is so far on the beta end of the spectrum that he often seems to disappear before your eyes. In Enchanted, a woman turns into a giant fire-breathing dragon in front of him, and he greets it with his usual air of tolerant befuddlement, as if he’s wondering, “What kind of craziness am I caught up in now, and will it make me late for dinner?” That understated reaction is the one thing he does consistently well as an actor, and in Enchanted and elsewhere, it does make him an effective foil to a strong female personality. Is that why he’s found such a following among the mostly female fanbase of Grey’s? Do they imagine him or some other McDreamy ideal boyfriend reacting in the same bemused, indulgent way to their own neuroses? I suppose that’s useful, but by itself, it doesn’t do much for me.

The moderately painful romantic comedy Made of Honor (that bad pun in the title makes no sense in relation to the film’s story) gives Dempsey many opportunities to pull that act. It also casts him opposite a strong female presence in Michelle Monaghan, although I only know that she’s strong by having seen her incandescent turn in Kiss Kiss, Bang Bang – this movie reduces her to a nice bland girl. That’s one reason why it never gains much momentum.

Dempsey plays Tom, a jobless and independently wealthy Manhattan bachelor who fills much of his endless free time by sleeping with a never-ending string of hot women. He has a bunch of personal rules regarding those women, which is a tic that’s inconsistent with the rest of his character and so tiresome that I was glad to see the movie largely drop it after the first 10 minutes or so. Anyway, through it all, the one person who sticks with him is the one woman he hasn’t bedded, Hannah (Monaghan), his best friend since college. When she goes off to Scotland on a six-week business trip, Tom misses her so much that he realizes he’s in love with her and decides to tell her so when she gets back. Of course, she returns with a strapping Scottish fiancé named Colin (KevinMcKidd) in tow. She’s going to marry him at his ancestral estate in two weeks, and she wants Tom to be her maid of honor.

Hmm, why doesn’t Hannah ask Tom to give her away instead, since her father is dead and she has female relatives who can fill the MOH spot, including a cousin who’s really bitter at missing out on the honor? The DELETE doesn’t answer that, but I can: Being named maid of honor causes the heterosexual Tom to be repeatedly mistaken for gay (not funny), get some ribbing from his male friends (not funny), and learn what a maid of honor’s duties entail (interesting, but still not funny). It also forces Tom to act happy for his best friend when he’d rather be in the groom’s place. Dempsey does raise a few chuckles with his fake Awww’s, though audience members will be reminded that his Grey’s co-star Katherine Heigl did a much better job of playing that kind of frustration in the recent 27 Dresses.

The real reason Tom goes along with the maid of honor gig is so he can “sabotage the wedding from the inside,” as one of his buddies puts it. This results in a lot of Dempsey-like dithering on Tom’s part while Colin and his large, controlling, titled family reveal the groom to be unsuited for Hannah. This pattern might have actually improved the movie structurally and comedically if the filmmakers had run with it and had Tom win the bride simply by being supportive and doing nothing to undermine the wedding. They’re not savvy enough to do that, though, and they seem at a loss as to how to have Tom bust up the ceremony while doing it in such a way that he’s, uh, made of honor. Their solution is a climactic scene that’s a little short of catastrophic.

As weak as this material is, it could have been partially salvaged with a less-diffident lead actor. At one point, Tom warms to his maid-of-honor duties in a bridal shop, delivering a monologue about china patterns while juggling the plates on display. That atypical burst of energy gives us a taste of what Made of Honor might have been. In the end, though, it only serves to highlight what a flavorless piece of wedding cake the rest of the film is.