You ever go to a Fort Worth Institution like West Side Cafe, or Ol’ South, or Paris Coffee Shop – some place that’s been around 25, 50, maybe 300 years – and think about what they must have been like when they first opened and were all fresh and new?

Were these the super-trendy hot spots of their day? On a quick lunch at same -as-it -ever-was Massey’s (1805 8th Av.), Chow, Baby was enjoying “A Fort Worth Favorite for Over 50 Years” – their always-perfect chicken-fried steak ($8.75 with mashed) – and thinking sure, now it’s tradition, but there must have been some point when chicken-fried was a brave new dish. Hard to pin down just when, exactly; creation theories include a West Texas short-order cook mistaking two orders (“chicken, fried steak”) for one in 1911, wiener schnitzel knockoffs among mid-19th-century Hill Country Germans, and pan-fried steak from cowboys-on-the-range days. However it started, there must have been a point when people were saying “Goshums, I gotta try me some of that newfangled – what do you call it? Steak chicken-fried?,” followed quickly by “Jeepers, I’m so bored with this chicken-fried fad.” And now it’s tradition. How does th at happen?

What really started this line of thought, such as it is, was dinner at Winslow’s Wine Café (4101 Camp Bowie Blvd.). Boy, does this place scream Early 21st-Century Westside Bistro, from décor to clien tele 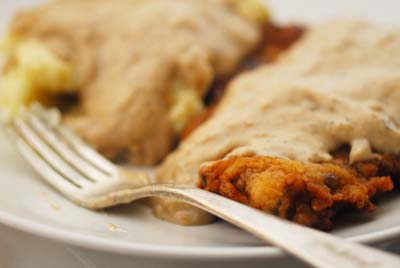 to service to, most especially, cuisine. The menu is a time capsule on a laminated page: truffle oil, balsamic reduc tions, applewood smoked bacon, caramelized garlic, quail egg, sugared limes, white asparagus, char-grilled baby fennel, ahi tuna, crème brûlée with an oooh-inventive twist. Which of today’s trendoids will be the traditions of 2059? Chow, Baby is betting on the stylish  ($17, cheaper than you’d pay at Buttons or Lambert’s or Grace or Aventino’s or Grady’s; yes, all the cool kids are doing short ribs) – following a six-hour braising, the tender and super-savory meat didn’t just fall off the bone, it leapt. “Small plate,”  another restaurant-vogue term, is incorrectly applied here: a good-size helping of meat, plus Yukon (of course) potato salad, plus smoked (of course) red cabbage-apple coleslaw all made for a hearty meal. Everything we tried, down to the peanut butter & jelly crème brûlée ($7), was chicly presented (of course) and, more important, absolutely delicious.

Undoubtedly Winslow’s au courant décor – mint/metal/brick, outdoor fireplace, piped-in folksy music as heard on VW commercials – will someday seem as quaint as Massey’s once-high-tech acoustical-tile ceiling, Red Rock Cola signs, and fluffy-era Beatles on the stereo. But what about the intangibles? At understaffed Winslow’s, server Toby was overloaded and over-rushed, but also was so witty and charismatic that Chow, Baby didn’t mind not getting all its forks on time. Will this typical-early-21st-century hip server-tude someday seem as old-school charming as Massey’s hey-hon waitresses do now? And will those West Side Bistro über-parents, the ones who need everybody in the restaurant to see and hear what a darn fine job they’re doing raising their mini-adult kids, be just as sadly archaic as today’s Fort Worth Institution diners who feed their fat kids deep-fried everything with fries on the side? Given its own spectacularly unhealthy eating habits, Chow, Baby surely won’t be here to see for itself. But if we could schedule a séance for April 15, 2059, Chow, Baby would appreciate hearing how this all turns out.