The best part of Pixar’s new movie Up comes early on. The film starts with its main character, Carl Fredericksen, as a little boy in the 1930s who meets a little girl named Ellie. After their initial meeting, the story gives way to a wordless montage depicting Carl and Ellie’s 50-odd years of marriage. This sequence is a masterpiece in miniature, displaying the astonishing pitch of the animators’ storytelling skills as the couple both work at the local zoo, she as a tour guide and he as a balloon vendor.


Tiny details like Carl’s taste in garish neckties define the texture of this couple’s shared everyday lives and also the upheavals in it. Their inability to have children is conveyed in a single devastating shot of Ellie’s body contracted in grief in a doctor’s examination room. Despite that, and the financial setbacks that keep the couple from realizing their dream of traveling to a location in South America called Paradise Falls, Carl and Ellie’s life together is a happy one, and the montage powerfully captures the fullness of that life. It says in fewer than 10 minutes what The Curious Case of Benjamin Button took three hours to say, and its final visual of Carl walking away from Ellie’s casket – decorated with balloons instead of flowers – may just be the saddest thing you’ll see in a movie. 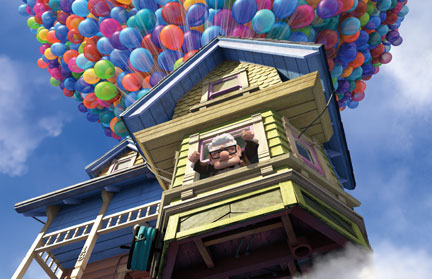 All this is mere prologue to the main story, which picks up in the present day with the retired 78-year-old Carl (voiced by Ed Asner) well on his way toward becoming a lonely and bitter old man, keeping his house as a shrine to Ellie and refusing to sell to a property developer who’s putting up a shopping center all around him. When Carl assaults a construction worker with his cane, he’s faced with losing the house and being packed off to a retirement home. Unable to endure either prospect, Carl rigs the house with enough inflated balloons to lift it off its foundations, steering it with a couple of sails made from blankets and quilts. He sets a course for Paradise Falls, and he’s thousands of feet in the air before he notices that a chubby 8-year-old kid named Russell (voiced by Jordan Nagai) has become an accidental stowaway on his porch.

The house suspended from a mass of colored balloons is the indelible image in this movie, absurd yet somehow logical. Like all of Pixar’s other films, Up is a splendid viewing experience on ordinary screens, so why it’s being shown in 3-D in some theaters is rather puzzling. The movie hardly needs the gilding of 3-D, and the extra dimension adds little to your understanding or your enjoyment.

Underneath the fantastical trappings, this is yet another movie about an old codger who needs to reconnect with the world through a little kid. Russell is on Carl’s doorstep because he belongs to a Boy Scouts-like organization that’ll give him a merit badge for assisting the elderly. The bond that forms between the old man and Russell, who’s being neglected at home, doesn’t really kick in until the very end of the film.

Once in South America, Carl and Russell take in a giant exotic bird that the boy names “Kevin,” sticking with the name even after discovering that the bird is female. Bad luck that an explorer (voiced by Christopher Plummer) who’s been in Paradise Falls since Carl’s childhood just happens to be hunting for a specimen of that same bird. The villain isn’t interesting, one of the few ongoing complaints one could consistently lodge against Pixar’s movies, and everything potentially menacing about him is turned comic. He’s served by an army of dogs that talk via special electronic collars, and the vicious-looking Doberman at the head of the pack (voiced by screenwriter Bob Peterson) draws a huge laugh when he first speaks. The threats to our heroes are frequently disposed of in jokey ways, and it all threatens to make the movie too lightweight, no pun intended. Pixar’s movies have action-packed climaxes because that’s what the audience wants, but you wonder what they could do without them, devoting a whole movie to a couple like Carl and Ellie or following up the apocalyptic implications of WALL-E.

Still, denying the pleasures of this film would be like popping someone else’s balloon. Up is funny, heartfelt, and never less than entertaining. Much like Cars, this movie tells us that while we all need a little adventure, life is what goes on between the thrills in the quiet, ordinary moments that we share with others. The movie ends with Carl and Russell eating ice cream in front of Carl’s new home, and while the unexpected form of the dwelling is a great joke, it’s the old man and the boy who engage your attention and your emotions. Nick Park would be proud.