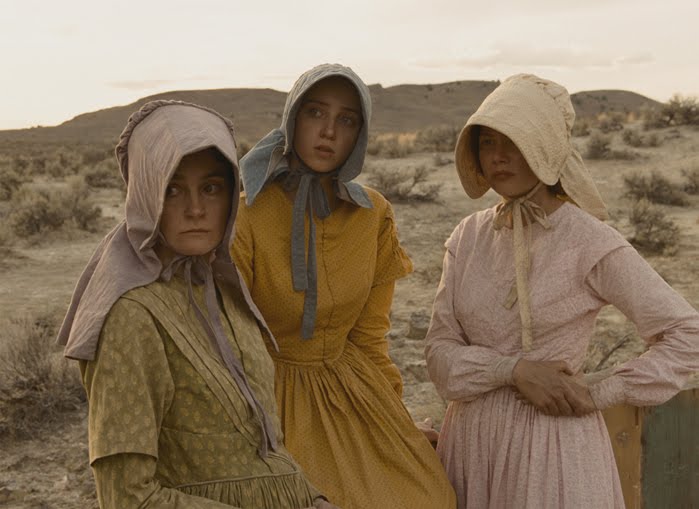 About halfway through Meek’s Cutoff, 19th-century Oregon settler Emily Tetherow (Michelle Williams) is gathering firewood. One of a small party traveling on the Oregon Trail to live in the new territory, she’s off some distance from her wagon, readying to make camp while all the men in the party are off searching for water. Suddenly, Emily finds herself face to face with a lone Indian (Rod Rondeaux) in the wilderness, separated from his tribe. While the native flees, Emily runs back to the wagon, grabs a flintlock rifle, and fires a shot in the air to warn the men.

So far, this is a typical scene from a Western film. But then something strange happens; the camera stays on a deeply shaken Emily as she undertakes the laborious process of priming and reloading the weapon, which involves stuffing gunpowder and lead shot down the barrel with a ramrod. It takes her a good 30 seconds to fire a second time. That’s a long time in a movie where there’s nothing else happening in the frame, and yet director Kelly Reichardt stays with it. That’s a telling moment in this highly unconventional Western that stands as one of 2011’s better films. It’s out on DVD this week.

The film is based on a real-life historical incident from 1845 in which a guide named Stephen Meek led the first party of settlers over the Oregon trail toward the Willamette Valley. The actual journey involved many more people and much more death and starvation than the movie shows. In the film, Meek (Bruce Greenwood) is a big-talking huckster leading three married couples and one boy through a harsh desert landscape, where the settlers are quickly running out of water. (When you think of Oregon, you don’t usually think “desert,” but apparently there is some in the state’s eastern reaches.) The menfolk are already discussing amongst themselves whether their guide knows what he’s doing and whether they should kill him. After the Indian is captured, Meek wants to kill the native straight away, alarming the settlers with tales of Indian savagery. Emily’s husband Soloman (Will Patton) has a different idea, turning the Indian loose and figuring that he’ll lead them to water.

If you aren’t familiar with Kelly Reichardt, you’ll probably be unprepared for the sparseness of her style. The director hits you right from the beginning with long takes of the settlers trudging through cracked earth and yellowed grass, with no conversation and no action to distract you from the slowness of their progress. Later she shows Emily kneading a biscuit and lingers on her hands as she turns the little knob of dough over and over. An insistently squeaking wagon wheel and the sound of the wind blowing are frequently all there is to hear. These elements are meant to convey that the characters are going through a tedious experience, but it’s difficult to do that without turning the movie into a tedious experience. For some, it didn’t work. New York Times critic Dan Kois touched off a firestorm earlier this year by calling this movie a cultural vegetable.

For me, Reichardt manages it just so. She previously did the magnificent Wendy and Lucy three years ago. Before that, she made Old Joy in 2006, which I’m not as big a fan of as most Reichardt supporters are. Her rhythms take some getting used to, but once you do this film is a marvel. The plot and technique may sound dry in the re-telling, but this movie is unexpectedly sensual. Costume designer Vicki Farrell makes the women’s dresses pop against the barren brown and ochre landscape, and Jeff Grace’s score is one of the best ones I’ve heard this year, with gently neutral bell tones punctuating the silences as the travelers cross this wide ocean of grass.

In retrospect, this widely acclaimed film was overpraised slightly on account of Emily being the character who finally takes control of the situation (hinted at in the image on the movie’s poster). The development feels a bit overdetermined, even though the moment is undeniably rousing, especially after everything preceding it shows the women settlers being systematically excluded from the party’s decision-making process. Much better stuff comes in the complex racial attitudes between the white settlers and the Indian (a Cayuse, to be specific). The movie also works as a psychological examination of people operating under duress and uncertainty, and we see one woman in the party (Zoe Kazan) come completely unglued in a crisis.

Still, the movie resists being pinned down. Reichardt’s films are full of pregnant silences that hint at the fundamental unknowability of her characters’ deepest selves. The Indian’s words are never translated for an English-speaking audience’s benefit, nor are the drawings he makes on the rocks ever explained. The conclusion is left open-ended, even with the remarkable climactic sight of a tree growing in the middle of the desert. That’s right, Terrence Malick fans: This movie has a tree of life in it, and much like The Tree of Life, it’s meant to be experienced rather than analyzed. The essential mysteriousness of this film is there to provoke post-movie discussion about the meaning of it all. Ferociously austere and enigmatic, Meek’s Cutoff is very much one of a kind.

The DVD is accompanied by a making-of documentary, but it’s done up exactly like the movie itself: no interviews, no explanatory narration, just footage of the cast and crew going about their business. If you want a great Western where women control the action, check out Nicholas Ray’s operatic, psychologically loaded 1954 film Johnny Guitar. Ironic that such a female-heavy movie would get its title from the name of one of its male characters. If you’re burning with curiosity about what the Indian is saying in his untranslated dialogue, Nina Shen Rastogi uncovered all sorts of stuff on Slate. The character speaks downriver Nez Perce (which the Cayuse would have spoken in those times) mixed with a bit of Crow (which is the actor’s first language). Nez Perce is in danger of dying out entirely in the near future, which makes this film a linguistic treasure in addition to everything else.