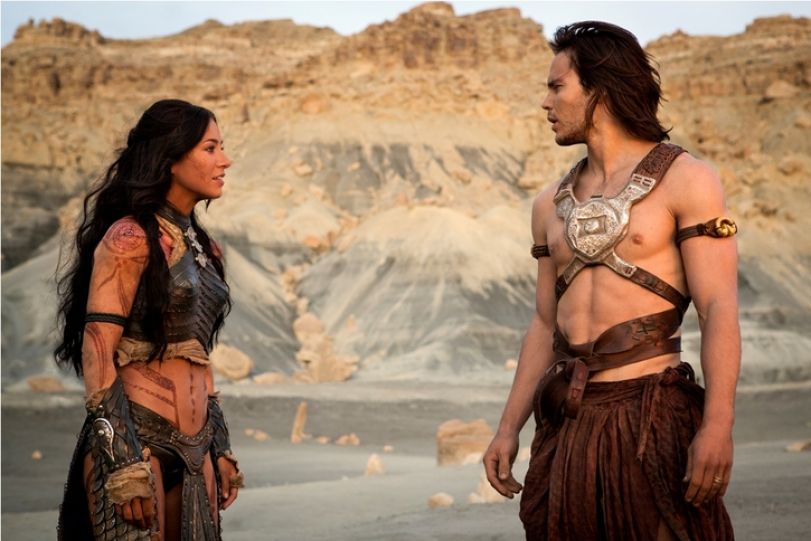 They say the easiest reviews to write are for very bad movies and very good ones. This was an easy review to write, because despite some minor problems, John Carter is one of the best times I’ve had at the theater in a while.

The movie follows Civil War vet John Carter (Taylor Kitsch) as he is transplanted to Mars, which its natives call Barsoom, a dying planet where the only constant is war. There, Carter discovers he can leap dozens of feet in the air and kill with one punch, thanks to his body’s being accustomed to Earth’s stronger gravity. After befriending Tars Tarkas (a Gollum-style motion-captured Willem Dafoe), leader of the green, four-armed, warlike Tharks, Carter rescues the beautiful Princess Dejah Thoris (Lynn Collins) and falls in love with her. Soon he’s embroiled in a war between her peaceful kingdom of Helium and the warmongering city of Zodonga, all the while trying to figure out his place in the, uh, universe.

[pullquote_right]…John Carter is one of the best times I’ve had at the theater in a while. [/pullquote_right]Tarzan creator Edgar Rice Burroughs wrote A Princess of Mars in 1912, and his  exciting tale of an Earthman transplanted to an alien world full of weird creatures, falling in love with a native, and fighting for his newly adopted world has influenced everything from Star Wars to Avatar. So the challenge of bringing the story to the screen, a task that has defeated many filmmakers, lies not only in bringing Burroughs’ imaginative and special-effects-intensive world to life, but also in making the story seem special after having its narrative bones picked clean by other works for nearly a century.

Luckily, Finding Nemo and WALL-E director Andrew Stanton is more than up to the challenge in this, his first live- action film, filling the movie with likable characters and making Barsoom a beautiful and dangerous place. Carter gets a tragic backstory, one that isn’t in the novel, giving his adoption of Barsoom real heft, and performances by Kitsch and Collins, while not on the level of, say, the lead actors in Star Wars, provide an involving emotional center. The special effects that bring the aliens to life, from Dafoe’s Tars Tarkas to (my favorite) Carter’s loyal alien dog, Woola, imbue the characters with tons of personality, and the action scenes are sweeping and epic, rather than chaos thrown at the screen. Add in a rousing Michael Giacchino score that conjures the best of John Williams’ ’80s-era work, and the whole thing feels like some glorious mix of Indiana Jones and Star Wars.

Unfortunately, the movie does have some drawbacks, namely a too-long run time. Alien jargon flies a little too freely, the prologue is clunky, and the movie meanders near the middle. Worse yet, poor marketing and a plain title seem to have left the movie, while not a bomb, at least disappointing at the box office. And that’s too bad, because John Carter is the kind of pure, concentrated fun that makes going to the movies worthwhile.

Sound of Metal: The Rest Is Silence