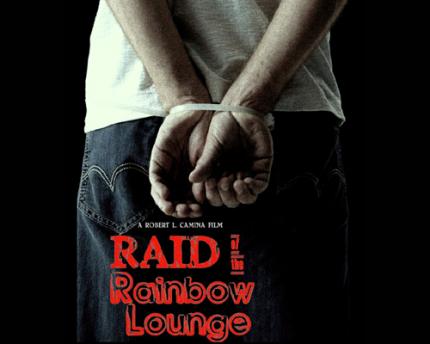 A great many things started on June 28, 2009, when Fort Worth police officers and Texas Alcoholic Beverage Commission agents conducted mass arrests at the Near Southside gay bar The Rainbow Lounge. One of them came to fruition last Thursday at the AMC Palace Theatre in downtown Fort Worth, when the documentary Raid of the Rainbow Lounge received its world premiere. Dallas-based filmmaker Robert Camina, who was supposed to be at the Rainbow on that fateful night but begged off due to a prior engagement, started documenting the outrage of his gay friends and acquaintances and the protests that followed that summer, originally intending to make a short film. Almost three years later, his 107-minute feature film played to a standing ovation at a sold-out, packed auditorium.

The film details the incident itself through extensive interviews with the bar patrons from that night. Though none of the officers on the scene was interviewed for the film, their point of view is represented through the report they filed and also through a TV interview with Chris Aller, the former TABC agent in charge of the raid. Camina strives mightily for journalistic balance, citing the death threats lodged against Police Chief Jeff Halstead and Fort Worth police in general during the incident’s aftermath to counter the overzealousness of the officers on the scene. In particular, he follows the movements of the officers leading up to their arrival at the lounge, when their rough confrontations at the Latino hangouts The Stampede and the Cowboy Palace likely left those officers in the wrong frame of mind to conduct a supposedly routine bar inspection. Camina occasionally shows his inexperience with the form, and viewers from elsewhere won’t get much of an impression of gay life in Fort Worth before the incident. Still, the film’s well-executed enough that it wouldn’t be surprising if it were picked up for distribution.

[pullquote_left]This 107-minute feature film played to a standing ovation at a sold-out, packed auditorium. [/pullquote_left]Among the luminaries in attendance at the screening were Meredith Baxter (the former star of TV’s Family Ties served as the film’s narrator) and City Councilman Joel Burns. However, the biggest splash was made by Chief Halstead, who received a standing ovation from the heavily gay crowd, something that would have been unthinkable in the days immediately following the raid. In his remarks following the screening, he admitted that he “came off like an absolute ass” with his initial statements of support for the officers who conducted the raid and also told how his niece’s lesbian partner refused to meet him during those days after reading the press coverage of The Rainbow Lounge incident. Those words were stronger than anything he said in the actual film, and they were a powerful sign of the change that has taken place in Fort Worth since that night in June.