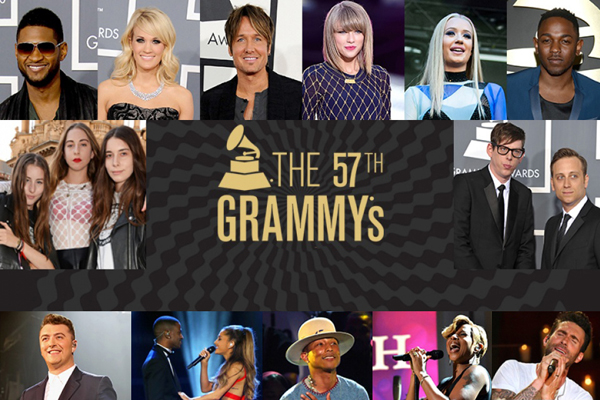 People really like to get worked up over award shows.

Whether it’s the Oscars, the Grammys, or even the Fort Worth Weekly Music Awards, people just enjoy losing their minds over these sorts of things.

Watching shows like this in public places is nuts, because people are all nice and liquored-up and will scream at the TV for the dumbest reasons. Watching the 57th Annual Grammy Awards last night at Magnolia Motor Lounge with about a dozen other folks, I heard numerous people screaming when Paul McCartney was playing “Four Five Seconds” with Kanye West and Rihanna. “Who the hell are these people with Paul McCartney?” “That Kanye guy can’t even sing!!” “Why does he keep grabbing his crotch?” (Talking about Kanye, of course, not Sir Paul.)

I used to be one of those people who would scream at the Grammys for their “great injustices” against music. Maybe it’s just me getting older, but I thought last night’s ceremony was one of the better ones that I’ve seen over the past few years.

Everybody is going insane with #KanyeWest online today over his almost-interruption of Beck’s win for Album of the Year. Now I really like Kanye and think that he definitely has had some genius moments in his career. Is the dude a little delusional sometimes? Sure. But he never comes across as insincere to me. He’s being honest. He almost pulled the same thing on Beck as he did to Taylor Swift at the VMAs a few years ago. The guy just really, really, really loves Beyoncé and thinks she deserved that Best Album award.

People act like Paul McCartney was somehow forced into working with Kanye on the hit single “Only One,” but the dudes had to have some kind of mutual agreement in place to work with each other. The result speaks for itself: a really cool, somber, simple song, with just Kanye’s voice and a keyboard refrain by McCartney. A Kanye song that has no beats, drums, or percussion at all? Crazy. The reason people really like West is that he is honest almost to the detriment of his career. He’s no phony. In the pop music world, which is full of phonies, you gotta give the guy credit for that, whether you like hip-hop or not.

The fact that Yeezy so obviously uses auto-tune also really seems to infuriate people. Look, the dude knows he’s not John Legend or Usher. He knows he’s no crooner, so why bother hiding the fact that he uses auto-tune? He leans on it on purpose. When I first heard “Only One,” I thought it was great and super-weird. But a lot of Kanye’s music is super-weird, and the fact that he is as hugely popular as he is by making such insane music is a good thing.

Yeezy-Gate aside, I thought all the performances were pretty good. I’m not really sure why John Mayer was dressed like Buddy Holly and playing a pink Jackson guitar (Katy Perry made him?), but young English singer-songwriter Ed Sheeran sang with Mayer and ELO. (Seeing McCartney standing up and singing along to “Evil Woman” was great.) Maroon 5 with Gwen Stefani was good. Beyoncé’s stark solo performance was great. Hozier sounded top-notch. Usher and Stevie Wonder got one of the biggest ovations of the night for their performance of Wonder’s “If It’s Magic.” Miranda Lambert’s performance was awesome. Lady Gaga with Tony Bennett? Super-good.

Even the winners were pretty spot-on. Kendrick Lamar took home two hip-hop awards for his song “I,” which includes a killer sample of “That Lady” by The Isley Brothers. Sam Smith dominated, which is a good thing because that guy can really sing. Smith catapulted to stardom this past year with his soulful hit “Stay with Me,” which Tom Petty later discovered is very similar to his own hit “I Won’t Back Down.” It is so similar, in fact, that Petty demanded royalties for a portion of it –– and won. St. Vincent, a Dallas product, won Best Alternative Album for her self-titled fifth long-player. Eminem’s The Marshall Mathers LP 2 won Best Rap Album. Beck took home a few for Morning Phase. And Tenacious D won Best Metal Performance, which has metalheads everywhere pissed.

Some people say award shows like the Grammys or the Oscars really don’t mean anything, and I can partially agree with that. Sure, the winners may sell some more records when Target puts that sweet “Grammy Winner” sticker on the CD case, but it’s never really about who wins. Taylor Swift even said last night when presenting the Best New Artist award that she lost that award in 2008. Whether you like her music or not, there’s no denying that she’s now one of the hugest of the huge megastars on Earth.

It’s really not about the winners or the losers. The most important thing is that, for better or worse, it is a ceremony to celebrate music. All kinds of music. We all love music, right? So regardless of who takes home a statue, just shut the fuck up and celebrate this amazing, miraculous thing that we all love.