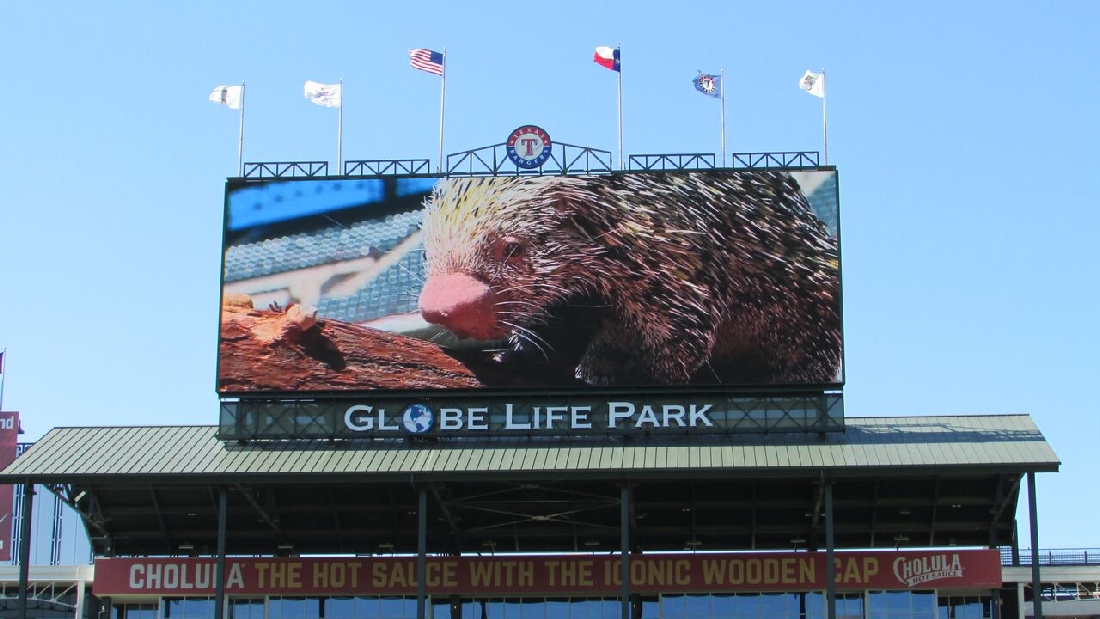 As I sat in the visiting dugout before the Rangers game with Oakland last Thursday, talk turned to the world-class athletic abilities of some talent we’d watched on the field a few minutes earlier.

“In five steps, they’re hitting almost 65 miles an hour,” my companion informed me.

I hadn’t gotten to see the prospect in question actually work out, but that sounded like some serious speed to put at the top of a lineup.

“If they had the cheetah as a leadoff hitter,” he continued, “this team – any team – would very much welcome the speed of an animal like that.”

My benchmate wasn’t talking about a ballplayer known by the nickname “The Cheetah.” He was referring to the actual cheetah that had prowled foul territory a little earlier. The scout in question was Sean Greene, Vice President for Guest Experiences at the Dallas Zoo. The zoo’s Animal Adventures Outreach Program ventured to Tarrant County for its annual Wildlife Education Day at Globe Life Park in Arlington. 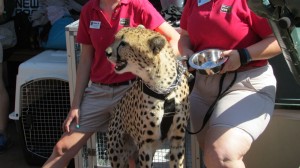 The zoo and the team designed the pregame program to educate young Rangers fans about animals, and Winspear the cheetah took part. He impressed some children, but didn’t get to run the bases and won’t become the successor to former Rangers Andrés “Big Cat” Galarraga or Frank “Cat” Catalanotto (whom Baseball Reference lists as having led off 198 times for Texas).

Theory: You would not want to have a cheetah hitting behind you in the batting order. If you singled and he hit one into the gap, odds are he would catch up to you on the way around the bases. If the cat then saw you less as a teammate and more as a plodding gazelle separated from your herd, failing to score might become the least of your concerns.

The zoo takes significant precautions to ensure the carnivore presents no danger to others or himself. Winspear’s entourage includes the two humans who handle his multiple safety harnesses and the cat’s best friend. 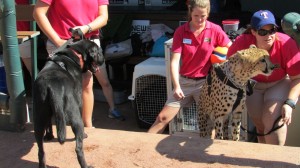 “That happens to be the black labrador, Amani,” said Greene. “He’s been raised with this cheetah since they were about three weeks of age. The dog is very much a comfort. Cheetahs are very shy in nature and if our cheetah gets a little shy out at a program like this, the dog comes in. The dog’s always wagging his tail because he thinks this great green grass out here is a place to play. The cheetah picks up on those cues from the dog, realizes the dog’s comfortable, and then the cheetah’s comfortable.”

While you may never see a cheetah in the Rangers lineup, a big part of the zoo’s motivation for the program has to do with your ability to ever see one anywhere.

“We brought today a cheetah that’s endangered, less than 10,000 left in the world. They’re seeing an African penguin. There’s less than 50,000 in the world,” Greene explained in the dugout. “These are critically endangered species and if zoos can convey a message to these kids and these parents and teachers today about what impact they’re going to have as they grow older, to protect this environment and the animals that are there, then it’s a really good opportunity for us to share that message.” 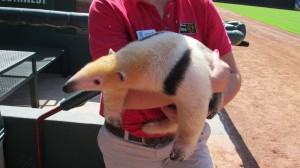 The messengers include people to handle the animals and some who enlighten the crowd about the following lineup of Animal Ambassadors:

The kids got to touch some reptiles and we all learned a lot. For instance, I did not realize that while the porcupine smells terrible, lady porcupines apparently are into that. Human females, I have noticed, evolved different sensibilities. 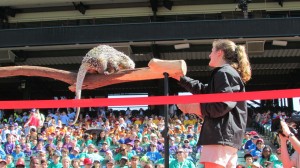 We also learned that while zoo animals are fascinating, they are still wild. You have to remember that fact, even if you’re an animal yourself. Rangers Captain, the Rangers’ official mascot, claims the penguins used to bite him every year (yes, I talk to horses). The penguins had no comment. 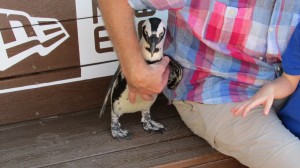 Disclosure: The Rangers annually pay me to work with their in-game entertainment staff to warm up the crowd at Wildlife Education Day. I performed the same task when I worked for the club and always felt the event didn’t get the attention it deserved from the fandom. If they do it next year, and your kid likes animals or baseball or both, think about taking the day off to check out some day baseball and some interesting animals.

[All photos by Rush Olson]