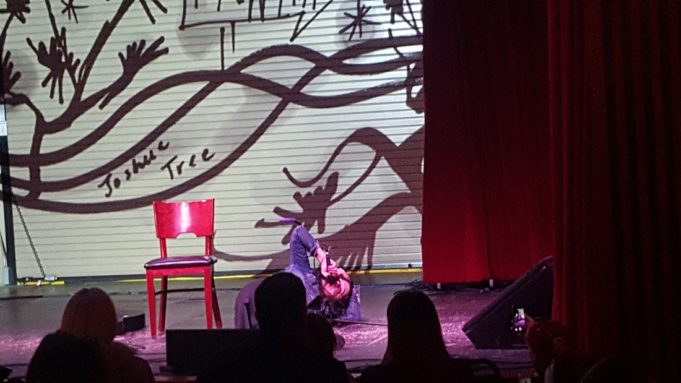 There are times when a band or an artist struggles through a show, and then there are absolute train wrecks that are too bizarre to be believed. The latter took place Friday evening at The Live Oak Music Hall & Lounge (1311 Lipscomb St. 817-926-0968), as Johnette Napolitano, lead singer of late-’80’s alt-rock band Concrete Blonde, was slated to perform to a capacity crowd at the Near Southside venue.

The shenanigans began about 20 minutes into opening act Laurie Sargent’s set. Sargent was in the process of thanking the audience for their support and mentioning that she had some merch for sale when someone could be heard yelling “Fuck you!” from back stage. Seconds later, the headliner staggered out from the back demanding the crowd had better “buy Sargent’s wares or else.” Napolitano tossed around a few more middle fingers and “fuck yous” for good measure before she realized “this is an open carry state, maybe I shouldn’t be yelling at y’all.” With Sargent still looking bewildered on stage, the visibly inebriated singer launched into a rambling story about playing a TV show in Dallas that morning, a bottle of mezcal, and an impromptu “song?” covering topics such as the movie Giant, its stars James Dean and Elizabeth Taylor, and the unfortunate shaming of her family name by her grandfather. Eventually, Napolitano disappeared backstage.

After Sargent finished her  set, Napolitano lurched out from the back, strapped on her acoustic guitar and seated herself on the left side of the stage. Joined by Sargent on electric guitar, the singer launched into Concrete Blonde’s biggest hit, “Joey.” The irony of being so shitfaced and playing a song about her relationship with Wall of Voodoo’s Marc Moreland and his battle with alcoholism was not lost on the audience, as Napolitano stumbled over lyrics and held notes longer than the song called for. It was during the opening tune that the vibe in the room turned from, “what a funny whackadoodle” to, “oh man, she is obviously wasted.” 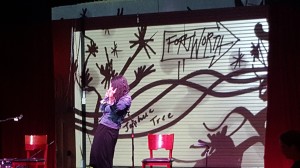 The shit-storm came to a head as Napolitano attempted to perform her fourth song, “Tomorrow, Wendy” from her former band’s 1990 album, Bloodletting. Obviously struggling to find the notes on her guitar, Napolitano cast her six-string aside and attempted the song a capella. Again, the songstress struggled with lyrics, often turning the microphone out to the audience for assistance with the words, all the while falling back on her master gesture for the evening — an unsteady middle finger. Towards the end of the number, Napolitano attempted to steady herself on her mic stand, but instead fell to the floor of the stage. After finishing the song laying on her back, and refusing a helping hand from Sargent, the stage curtains closed and house music was piped through the PA. 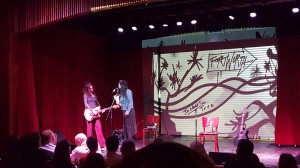 Show over, or so it seemed. The mood of the room’s stunned onlookers turned from anxiously watching a clearly inebriated performer struggle through a few songs, to the realization that Napolitano was most likely not going to finish her set, leading many to wonder what the fate of their cover charge (some paid upwards of $200 for VIP tables up front) would be. The curtains eventually reopened and Napolitano seated herself on a stool on stage, singing along to Fleetwood Mac’s “Landslide” as it played over the house speakers, before announcing the show was indeed over and thanking the audience for putting up with her mess.

Napolitano has since taken to social media to apologize to the fans in attendance with a statement on her facebook page citing recent back troubles and poor pacing as reasons for the disaster.