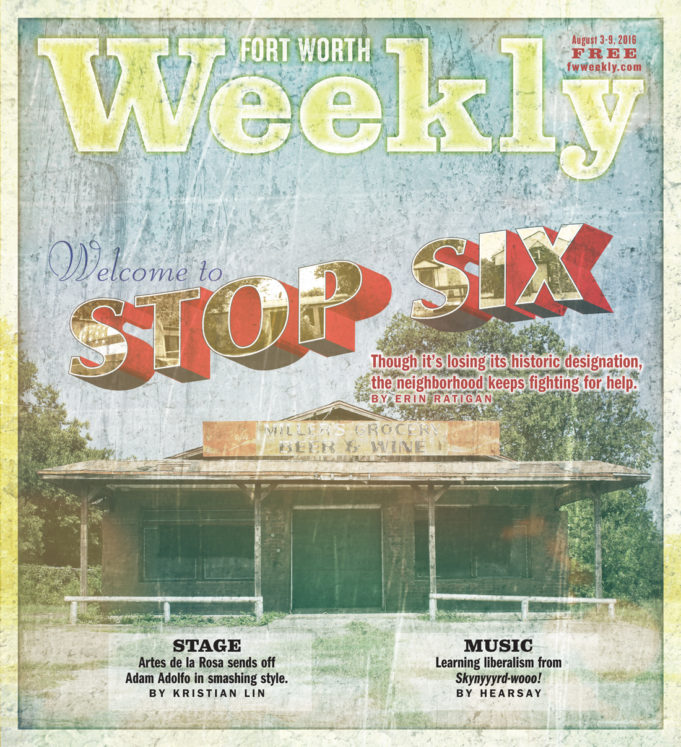 Regina Blair’s “Hillary for President” t-shirt was drenched with sweat as we sat in the sweltering July heat. Before meeting her at her mother’s house, I had noticed the temperature gauge in my car: 96 degrees and climbing.

Despite the brutal climate, there was a reason Blair chose her mother’s back porch for our interview: She wanted me to see her mother’s small wood-frame house with wood siding. Built in 1932, it is one of many vintage homes in Stop Six: Sunrise Edition, a smaller community within Stop Six, one that is historically protected.

Make that “was” historically protected.

Blair, who is of medium height and build, today with her dark hair pulled up into a tall bun on top of her head, passionately described the history of her neighborhood, her deep brown eyes shining as she gestured in different directions while detailing all the streets on which her cousins, mother, father, grandparents, siblings, and family friends have lived.

As president of the Stop Six: Sunrise Edition Neighborhood Association, Blair can’t help being excited by talking about preserving the area for future generations. But her idea of preservation conflicts with that of Fort Worth’s City Council.

But, as Blair argued on this hot summer afternoon, the story is not so straightforward. In fact, this is only the beginning.

The historical element is hard to spot in Stop Six. However, look closer, and you can spot the hallmarks of 20th-century Southern architecture: wood-sided houses, ­most painted white, with dark roofs and shutters and brass door knockers. But perhaps the most noticeable difference is in the size of these houses.

Some look so small it’s a wonder anyone can live in them. Such tiny homes are not uncommon in neighborhoods like Sunrise Edition, an area only about half a mile wide and which has always been predominantly African-American. These houses were often expanded later to meet the needs of the growing families within. Some include additions from the 1950s or later. Sixteen churches also reside in Sunrise Edition.

In the early 1900s, Stop Six was the sixth transit stop on the Northern Texas Traction Company rail line connecting Fort Worth and Dallas. It is also a region steeped in sports history. Stop Six is the home of Dunbar High School and its championship basketball team. Stop Six was also the early hometown of boxer Elmo Henderson.

Stop Six: Sunrise Edition, bordered by Ramey Avenue to the north and East Berry Street to the south, is easy to miss unless you spot the historic district graphics on the street signs.

Despite the area’s historic and athletic significance, many non-locals across Fort Worth consider Stop Six an unsavory place, rife with gang violence and crime. But Michael Shedd, Fort Worth Police East Division captain, told me that reports of criminal activity in the area are no more frequent than in other Fort Worth neighborhoods.

“The Stop Six area is of no greater concern than any of the other neighborhoods within the East Division,” he said.

He went on to say police feel both supported and encouraged when they run crime-suppression details in Stop Six, with locals thanking them for their service. There is an ongoing conversation, Shedd said, between the department and the City Council regarding safety in the neighborhood.

“The vast majority of the residents in the Stop Six area love seeing the police,” Shedd said. “That’s a fact. They invite us to church with them, invite us to various neighborhood meetings and other gatherings. They always make us feel welcome.”

The low-cost housing and convenient downtown commute make the area potentially a good location for development.

And to make way for the good, you’ve first got to get rid of the bad.

By 2008, Blair and her neighbors were increasingly concerned about the number of demolitions in the area. When Blair and company had first formed their association that same year, they believed their role in the neighborhood offered them the chance to defend their loved ones’ homes against unexpected demolitions. And, yet, some demolitions were happening unexpectedly.

One day as Blair was chatting with Regina Duncan, the association’s vice-president, she learned that a house that Duncan saw just last week was now gone.

Duncan, Blair remembered, immediately called the homeowners, who had recently left to take care of an ailing relative.

“They all come to the neighborhood,” Blair recalled, “and they’re going, ‘We don’t know what happened to our house. We have no idea.’ ”

Blair wants the city’s approach to be one of community-building, not community rebuilding –– using the past as a foundation for the future, instead of bringing houses down. An average of seven structures in Sunrise Edition have been demolished annually since records began in 2007, said Murray Miller, senior planner with the Historic Landmarks Commission, a city commission intended to spread awareness of the value and significance of historic sites.

By last year, there were a total of 54 demolitions.

The event left Blair in shock, and in that moment, she realized how little communication existed between the neighborhood association and the City Council. If this lack of communication is not fixed soon, Blair worries that her neighborhood could be torn down and rebuilt.

“Hold off on the bulldozing, because some of these things may be worth keeping,” she said.

Rosie Williams, who has been living there for 41 years and has been a member of the neighborhood association since 2003, said that while she and many other concerned residents have had some success in reducing crime, group projects usually reach a stalemate due to a lack of communication, both among members and with the city.

“If staff is not onboard with you, things can come in and happen,” Williams said, referring to demolitions in the area. “If you have a neighborhood association, then [the city needs] to let the president know what’s going on.”

Locals haven’t always maintained a positive relationship with the police, Blair said. After graduating from the Massachusetts Institute of Technology in 1994 and spending four years teaching architecture at Hampton University in Virginia, she moved back to Texas in 2003. She was dismayed by the deterioration that had taken hold of her hometown in her absence. One morning as she left her mother’s home on Lena Avenue, she was approached by a young woman trying to sell her a pair of shoes.

“I was really bothered by that,” Blair said. “I really was. She’s desperate enough to approach me, who’s getting ready to go to work, and ask me if I want some shoes.”

Seeing such poverty was upsetting for Blair and added to the many requests that she was receiving from older residents asking that she return to Stop Six and help them take back the neighborhood.

“I said, ‘Isn’t there a neighborhood association?’ And it was like, ‘There is not,’ ” she said.

There was a neighborhood action committee at the time, but after attempting to reach the group president, Blair realized it was not an active organization. After working as a Fort Worth city planner and in the permitting department of the city of Dallas in the early 2000s, Blair had built up the experience to be able to form the neighborhood association and make its voice heard, she felt.

“My background in architecture and city planning was most helpful,” she said. “I said, ‘Hey, I have that training. I have that experience. Now I’m going to challenge myself and see if I can use those same skills and experiences here at home.’ ”

To defend Stop Six: Sunrise Edition came naturally to Blair –– it was what her father had prepared her for since she was a child. Her father, she said, was an entrepreneur –– a shoe repairman with a passion for his community. Her architecture major, her future career –– all of it was laid out for her when she was little, Blair said, starting with her father’s first words of wisdom.

“He said, ‘One day you will be able to help build and add more to your community,’ ” she remembered. “ ‘It’s good if you’re able to go out there and learn how to do it, baby.’ ”

Blair couldn’t help but smile as she recalled this to me –– that smile comes out every time she mentions her father, who died in 2006.

“This is my field,” Blair said. “This is my expertise,” describing her approach to forming the association. “I said, ‘If we’re going to do a neighborhood plan, let’s talk about every aspect of neighborhood revitalization that needs to occur.’”