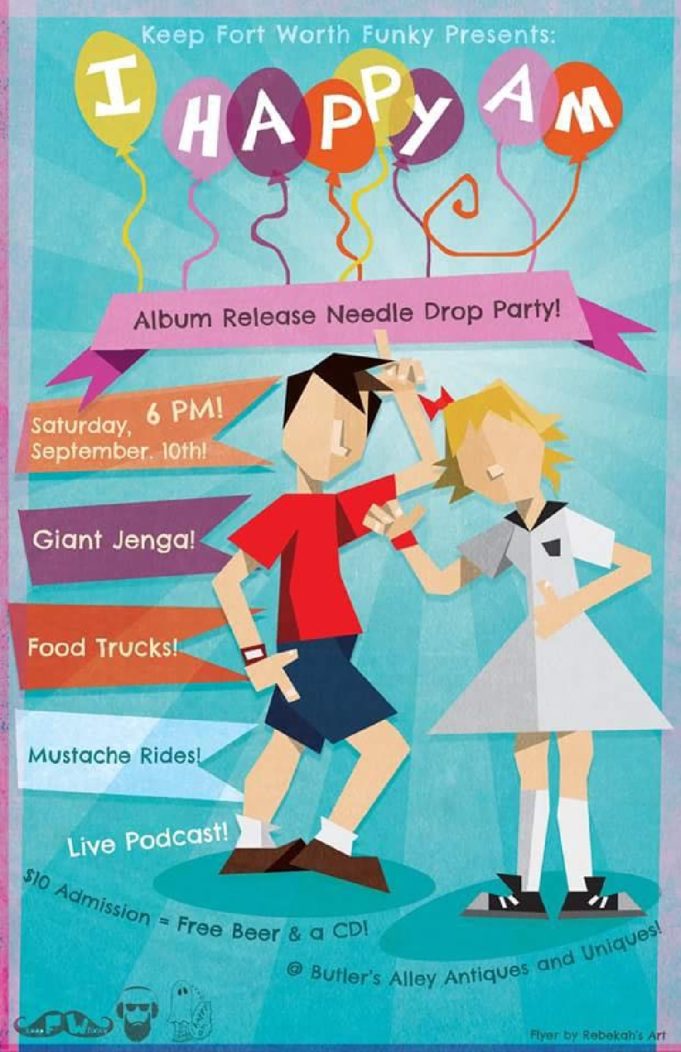 1) September’s Friday on the Green features up-and-coming troubador Vincent Neil Emerson in the headlining spot (aka 8pm), with roots music wizard Luke McGlathery before him and R&B group Feletha Black starting the night off at 6. This bill looks to be a reschedule of last month’s rained-out FOTG (Charlie Crockett, absent here, was the headliner then). Nice to see VNE move up to the headlining spot – weather witches seem to think it’ll be cooler around concert time this weekend, so be sure to get out early and catch Feletha Black; your dad will appreciate that you got there early enough to get a good parking spot, too. Here’s Feletha Black rocking a set at Lola’s from a year or so ago:

2) Ever been to Butler’s Alley and Antique’s? It’s on 8th Ave, between Mitchell and Jessamine, across the street from the train tracks. Besides providing the opportunity to dig for some exciting vintage furniture finds and whatnot, Butler’s is hosting “fuzz folk” duo I Happy Am’s (see this week’s FW Weekly) CD release on Saturday, starting at 6pm. It’s all-ages, there’s free keg beer (until it’s gone, obviously) for 21+, and it’s free unless you want a CD, which are $10. Seems like Kimya Dawson fans would be into IHA, but what do I know? Judge for yourself by this live, Halloween performance in some kind of store

3) Once again, Fall Gallery Night has crept up on me like a team of ninja disguised as oil paintings and/or hiding inside blown glass sculptures. It’s on Saturday, so expect the Ubers to be busy and expensive as people transport along the annual art-browsing/free-beer-and-wine-don’t-mind-if-I-do-ing circuit. Be sure to stop at the Grackle Art Gallery (4621 El Campo) for its “No Arms, No Legs, Hangs on the Wall” show; in addition to new work from local artists like Shasta Haubrich, Diana Urbina, and Jeremy Joel, there’s (are you ready???) LIVE MUSIC! Dallas-based songwriter Ashley Myrick will perform, as well as a spoken word set from someone named “Sin.” This video is a few years old, but doesn’t it make you want to go hear her now? You’ll just have to wait until Saturday, friend:

4) Try not to overwhelm your liver too early on Gallery Night’s complimentary beverages (where available), because otherwise you’ll be too drunk for the TEAM TO BEAT SHOW OF THE WEEK, aka the Me-Thinks’ Record Release and Underachievement Award Extravaganza. Local record collectors take note: if you don’t have every Me-Thinks release, I question how seriously you actually take your hobby. But even if you only have like 200, 300 records, and only a quarter or so of the Dreamy Life catalog, you should definitely pick up a copy of their new vinyl single. You can read my review from a couple weeks ago right here, but in my opinion, I think it’s the Haltom City fuzz lords’ best record yet. Duell start the night off with out-of-town rock ’n rollers the Hickoids in the middle spot. When the Me-Thinks released their Three Chili Dog Night 12-inch a couple years ago, they had free chili dogs, so expect some kind of sloppy snack station set up in Lola’s front porch zone. Also of note: if you go to see Kraftwerk earlier, your ticket stub (or I guess the confirmation email) gets you into the show for only $7! This song is called “Party Boy.” You’ll likely hear it in the Me-Thinks set:

5) Speaking of Kraftwerk, Kraftwerk are playing in Dallas (at the Bomb Factory) for the first time since the 1870s or something. Lots of people love Kraftwerk, I know. I am not one of them. I don’t dislike them, but I have always been more interested in the music inspired or derived from the Krautrock/electronic music pioneers’ career and aesthetic. Lot of Stereolab CDs on my shelf, LOL! Stereolab pro-tip: Once you tire of Emperor Tomato Ketchup, try Chemical Chords! Here’s something off of Stereolab’s Dots and Loops. Boy howdy do I love Stereolab!