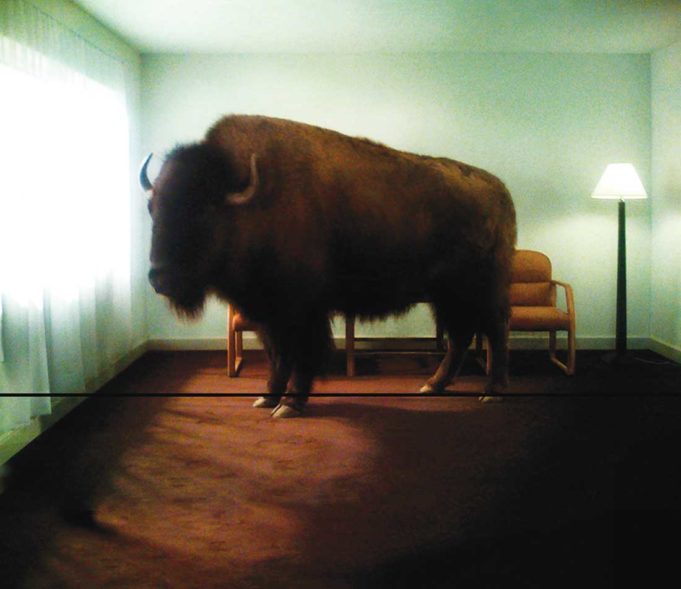 “Song1” is arguably the first work you encounter in Electric Earth. Music from the seven-channel composite video installation seeps into the stairwell leading to the second-floor gallery, overshadowing “Twilight,” the glowing sculpture of a payphone at the top of the stairs. Doug Aitken’s 360-degree video installation is set in a gallery darkened with black walls and carpet, illuminated only by the light from the seven projectors creating the blended video image. The Flamingos’ 1959 classic “I Only Have Eyes for You,” sung by multiple performers, plays across the screen.

Originally conceived as a projection for the smooth, 360-degree façade of the Hirshorn Museum and Sculpture Garden in Washington, D.C., the installation version here envelops viewers entering the projection-in-the-round while maintaining part of its original surface-projected appearance. Although the screen allows for viewing both in and out of the circular space, its volume prevents a complete exterior view due to the screen’s narrowing at the edges of the circle where it meets the gallery walls. This, however, does not diminish the experience.

“Song1” fully embraces the capacity of video to layer perspectives and also offers a “disruption of narrative,” in the words of Museum of Contemporary Art Director Philippe Vergne, who organized the exhibit, while editing and packaging our perceptions outside of simply processing visual information. Aitken writes, “This expansion and compression of time moves us toward alternative forms of perception.”

For example, in what begins as an ominous scene in the 34-minute video loop, a woman walks alone to her car in a parking garage at night. Her vehicle is parked in the center of the exit lane. Four other cars pull out of their spots, encircling hers as they begin a synchronized, choreographed car dance in the garage. All of the cars are red. At the end of the segment, she slowly drives down the circular garage as another story begins – all the while, the Flamingos’ song plays in the background. This scene is repeated within the loop of the video, which reads more as a series of short films than music videos.

Vergne relates this disruption of narrative to the cracked mirrors in some of Aitken’s other sculptures, noting in his introductory tour of the exhibition that mirrors in Aitken’s world are always fractured and that he breaks film down in the same way.

In the artist’s multichannel, eight-screen video installation from 1999, “Electric Earth,” he lays out a visual lexicon that is the source material for future works. Across a backdrop of motels, parking garages, payphones, 99-cent signs, and billboards, the scenes develop as the installation spills into rooms separated by screened walls. A young black man sits on a bed in a motel room as a narrator (presumably the young man) describes what it feels like to dance.

“A lot of times I dance so fast that I become what’s around me. It’s like food for me. I absorb that energy. It’s like I eat it. That’s the only ‘now’ I get.”

That last sentence echoes as the young man leaves the hotel room and as the installation continues deeper into the gallery. The split screens show him walking, then dancing on the sidewalk, as he moves in and out of spaces. The edits of him popping and locking his finger and arm joints, gliding through a Laundromat, are jarring. His electric, staccato jerks mimic the spinning of washers and dryers as he swishes by.

This innocuous scene of a black body dancing into the heart of the city, at one point avoiding a security camera, and walking through a parking lot at night also evokes a sense of tension and impending danger. There is vulnerability inherent in his movement, which imbues the scene with an inescapable duality, echoed by the narrator’s voice echoing, “That’s the only ‘now’ I get.”

As he continues to walk past 99-cent stores and payphones, the dancer’s naked torso is then revealed in a double exposure, with music pulsing, as he heaves and shakes, while city lights sparkle across his body, zooming and then dissolving into an abrupt silence.

Around the corner, the figure slowly and quietly disappears into a tunnel.

The images in “Electric Earth,” like the 99-cent storefronts and the payphone, are repeated in the series of 216 photographs that make up “99¢ Dreams.”

Vergne, in his introduction to the exhibition catalog writes, “Aitken’s repetitions of images might seem disorienting, and their effects –– musically and visually –– amount to the use of the fragment as a dynamic, such as a voice reciting ‘check in, check out,’ which is a part of the audio in ‘Black Mirror.’ What we see and hear is never the same though never totally different: a gradual relocation of meaning, never completely a repetition.”

Vergne continues, “The fragmentation of images, sounds, and narrative is continually servicing any risk of historical or narrative linearity.”

This fragmentation is physically embedded in the mirrored surface of “1968 (Broken),” a high-density foam, wood, and mirror sculpture that highlights the year of the artist’s birth –– a tumultuous time that also marked the assassinations of Senator Robert F. Kennedy and Dr. Martin Luther King Jr., among myriad riots, protests, and upheavals.

In the same room is an arresting video work. In “House,” two figures, male and female (the artist’s aging parents), sit at a table as the house they’re in (the artist’s Los Angeles home) is demolished around them. Shots, established from multiple perspectives, highlight the figures’ intense gazes at each other as drywall, beams, and windows crash into fragments around them. The house crumbles like a façade, the broken glass falling from windows echoing the sculpture on the wall in the same gallery.

The house, of course, had always been decaying invisibly, crawling toward entropy, the process hastened by its demolition. The figures in a sense are also, like all of us, moving toward the end (which is the title of another mirrored sculpture across from “1968,” sandwiching the “House” video). This juxtaposition of three works in relationship with one another is one of the highlights of the show.

Navigating the spaces between galleries in Electric Earth, however, can be a bit unnerving, due to the narrow spaces connecting the rooms in this exhibition. And because it doesn’t naturally flow from one gallery to the next (I found it particularly inconvenient to be forced to walk back through the title work of the show), there is a good chance that you might miss the three sculptures in the far east gallery, “Station to Station (Volume).”

Granted, these sculptures, representing a physical manifestation of the artist’s 4,000-mile cross-country train journey, deserve their own spaces, they are easy to miss because of where they are located in the gallery.

Walking out of the exhibition and observing others experiencing the show, I couldn’t help thinking about “migration (empire),”  the video installation on three steel-and-PVC-screen billboards in the center gallery. It’s a series of videos of animals in motel rooms curiously, quietly observing and experiencing their own alternative forms of perception.