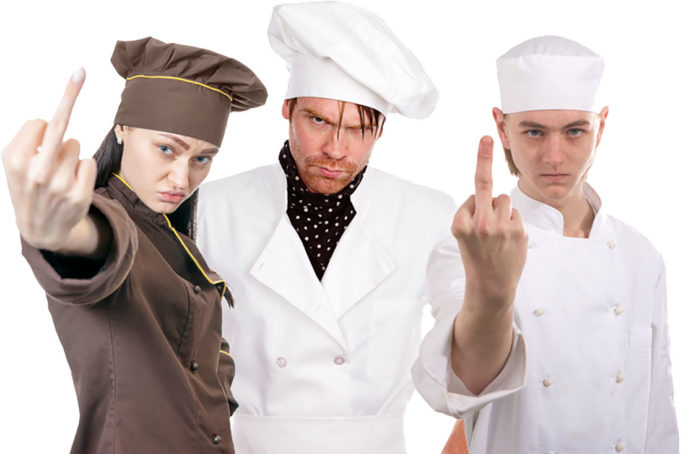 The lunchtime crowd of mostly walk-ins piled into the dining room all at once on a scorching August afternoon back in 2004. Around noon, orders were pelting the kitchen like paper bullets. I was waiting tables at a long-shuttered Tanglewood-area critical darling, where I worked for about a decade, holding several positions. The AC in the kitchen had been limping along for weeks in the corner strip-mall locale, and the normally even-tempered (for the most part) kitchen staff radiated the collective charm of a starving wolf pack. You didn’t want to mess up an order that summer.

I went back to the window to check on a long ticket time and noticed the cooks had left the line. “This is no time for an all-hands smoke break,” I thought. I looked outside at the rusty rail that teetered at the entrance ramp to the backdoor, where most of the smoking happened. I checked the walk-in refrigerator, imagining all five of the staffers were huddled inside trying to regulate their body temperatures, which wasn’t unprecedented. Nothing. There was no one at the bar, in the deli area, parking lot, or bathrooms, either. Other incredulous servers milled about in the kitchen, perhaps expecting a clown-car-type of prestidigitation after an elaborate prank. No such luck.

I was the first to alert our manager that the kitchen staff had abandoned post at the height of the lunch rush. What I didn’t tell him or the owner/chef is that the walkout was my idea – though I presented it as a joke. Before the shift, while cutting lemons as part of my side-work, I was chatting with the chef de cuisine. He and I had become pretty close, despite his occasional heat-induced tantrums. Off-handedly, thinking I was being supportive, I told him that no one should have to endure this kind of work environment. Of course, the owner had tried to fix the AC several times to no avail, but this was no time for context or logic. “If I were you,” I said, “I would organize a strike or something until the air-conditioner is fixed.” He laughed. I laughed. A few hours later, he and the rest of his team were gone – apparently to lunch at neighboring Charleston’s.

The manager at the time, led by a team of another server and me, endeavored to crank out food orders. He ordered waitstaff to tell everyone in the dining room that the kitchen lost electricity and that we could serve only sandwiches and salads. Every lunch would be comped that day. For the most part, the customers handled the news well. A few left but all with gift cards in hand. As far as I know, not one customer lost his or her cool – if only that were true for those of us in the back.

Still decked out in our long-sleeve shirts and stained ties, our rag-tag three-man kitchen staff frantically chopped, mixed, and assembled all the components to the most basic menu offerings. Even our evening maître d’/manager, local culinary legend Walter Kaufmann, came in early to pitch in. The heat was unbearable, and none of us could tolerate the missteps or ignorance of the others. These were my friends only half an hour before, and now the mere sound of their voices sent me into a rage. Still, through clinched teeth and passive aggressive barbs, we pressed on. I imagine that was the type of bonding you experience only in a prison riot, when you form an alliance with a rival gang.

Through a fog of anxiety and a cacophony of panicked servers, we interlopers made it through the orders. For everyone who endured that shift, those three nerve-racking hours will be forever etched in our collective subconscious. Even now, when I have anxiety dreams, images from that day are what my stressed-out brain recalls.

When the kitchen staff returned around 2pm to make their demands known, the place looked like a third-world shantytown had been hit by a hurricane, and we were the survivors. I made eye contact with the chef de cuisine, my conspirator. We shared a laugh through the fingers that covered his gaping mouth as he surveyed the debris of lettuce, bread, piled dishes, and waitstaff tears.

“You guys are cleaning this up,” I laughed.

To ownership’s credit, no one was fired or even lost a shift. There were a lot of raised voices, but that’s about the extent of the aftermath. The AC was fixed a few days later.

My former coworkers stuck together and made their point. It occurs to me that if ever there was a time for quality service industry staffers to start demanding better pay and working conditions, it’s now, before the local restaurant bubble pops. Business owners aren’t going to make changes that benefit you until you force their hand.