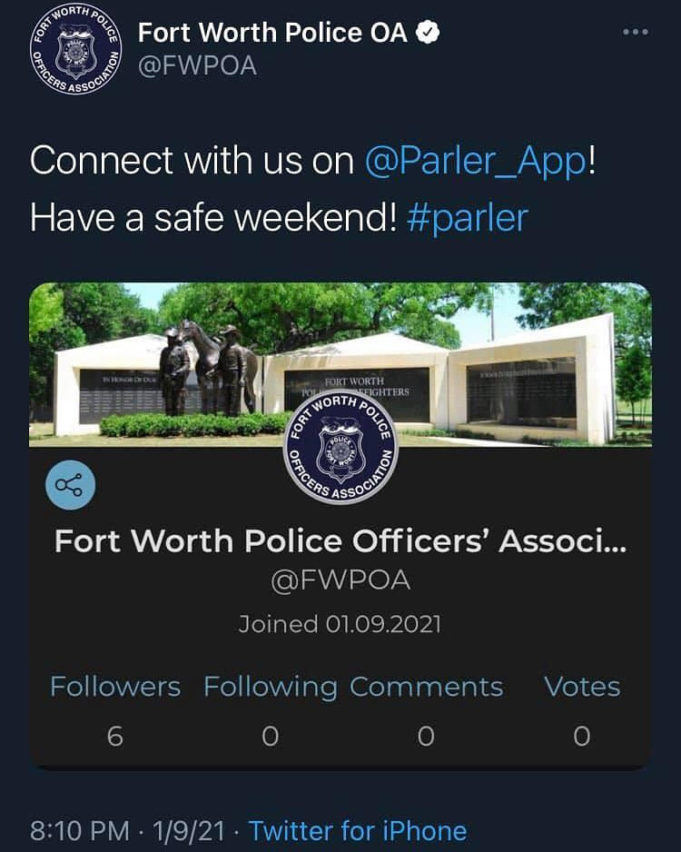 The relationship between white supremacists and cops is deep. To deny it is to lack self-awareness and live in Lalaland.

In 2017, according to the nonpartisan law and policy institute The Brennan Center, the FBI “reported that white supremacists posed a ‘persistent threat of lethal violence’ that has produced more fatalities than any other category of domestic terrorists since 2000. Alarmingly, internal FBI policy documents have also warned agents assigned to domestic terrorism cases that the white supremacist and anti-government militia groups they investigate often have ‘active links’ to law enforcement officials.”

Not long after Wednesday’s attempted coup in our nation’s capital, the Fort Worth Police Officers’ Association joined Parler, a social media platform preferred by white supremacists and conspiracy theorists before servers stopped carrying it … because it was full of white supremacists and conspiracy theorists. In a city with a stark lack of trust between police and citizens of color, the union must realize that the move could have been seen as an act of aggression. Maybe that was the point, especially as every other major platform has begun cracking down on hate speech, conspiracies, and the kind of misinformation favored by the White House. Maybe the point was to say to Fort Worth’s minority communities, “Eff you.”

FWPOA president Manny Ramirez has said his group joined the platform as a way to secure their proper handle. In a tweet from @FWPOA on Jan. 9, the union seemed awfully glad, downright giddy to have Parler’d.

“Connect with us on @Parler_App!,” the FWPOA tweeted with a photo of the Fort Worth Police & Firefighters Memorial. “Have a safe weekend! #parler”

Not the kind of (cheery) language a group would use merely to secure a handle.

Not all Fort Worth cops are racists. By far. Most of them, I’d argue, respect diversity. The problem is that that’s not enough. Fort Worth cops and the union that represents them need to take a step beyond what’s expected of them. Joining an unregulated platform peopled solely by conspiracy theorists, domestic terrorists, and other Republican politicians is a big middle finger to progress.

The police union needs to realize that the connection between the current occupant of the White House and white supremacy can’t be ignored. He has taken a hardline stance against immigration, he supports voter suppression, and he’s turning the clock back on progress made against housing discrimination and police misconduct. With so much mistrust from the Black community, the Fort Worth police union must go above and beyond what is acceptable in other, less polarized cities to ensure that every Fort Worthian, no matter their color, is worthy of respect.

This post has been updated to reflect new information.