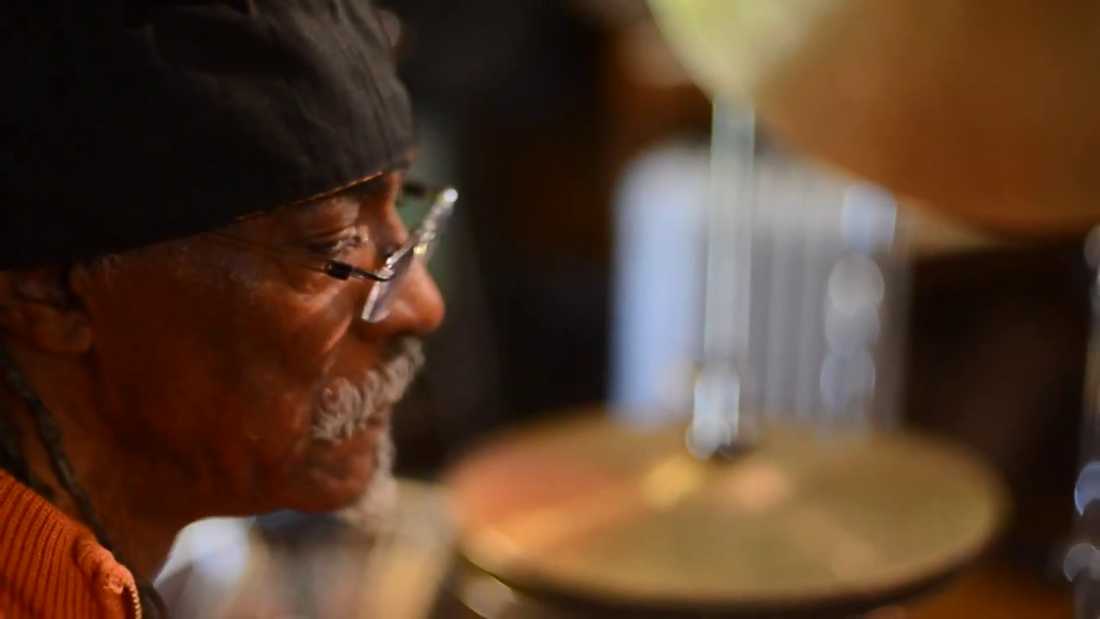 The haunting music wafts out of the black-painted frame house. The notes have no trouble negotiating the double layers of wrought-iron fence, surrounding first the porch and then the yard of Ronald Shannon Jackson’s home. The music elicits no whisper from what looks like an old school bell, or the myriad other bells and chimes hung on the porch enclosure, and raises nary a rustle from the dozens of potted plants that crowd the yard. The strange tunes float around the black 280Z parked in the driveway and out to a visitor on the sidewalk.

Despite the chill of an October night, the front door stands open. Inside, the house is filled with books, c.d.’s, videos, drums, African masks, piles of printed-out e-mails and musical compositions in progress, and odd-looking instruments. An organ and a piano sit in facing corners of the front room. Two large, colorful paintings by Jackson’s lifelong friend Sonny Benton hang in the den.

Follow the music down a hall whose walls are covered with snapshots and scrawled fragments of sheet music. Turn left, and there you find the source of the sounds — Rachella Parks, saxophone player from Jackson’s band, the Decoding Society, playing keyboard, and violinist Lawrence Haywood, auditioning to join the group.

Now a slight but solidly built man with spectacles picks up a strange instrument with multiple bells, like a Medusan version of a clarinet. That’s Jackson, 62, intelligent, articulate, wryly humorous, his hair braided with rivets and New York City subway tokens. What he’s playing is a schalmei, a medieval ancestor of the oboe, and he leads the two musicians through the piece they’ve been rehearsing, the violin echoing Jackson’s plaintive melody over a lush bed of keyboard chords.

Ayler’s music was influenced by the Masonic marching bands and blues combos he played in while growing up in Cleveland, but was much freer and more emotionally direct, highlighted by his huge, vibrato-laden sound. “Albert was the first [leader] that really opened me up,” said Jackson. “He let me play the drums the way I did in Fort Worth when I wasn’t playing for other people.” The saxophonist died in 1970 under mysterious circumstances and is now the subject of no fewer than four biographies currently in progress. Now Jackson hopes the biographers will “tell the real story, how it really was, not the Hollywood version. But they’re not talking to the people who really knew Albert.”

Jackson had achieved the jazzman’s dream of making the New York scene, but he still wasn’t fully committed to the musician’s life. The death of saxophone avatar John Coltrane in July 1967 hit the drummer hard emotionally, and he spent the next seven years drifting between music, drugs, and petty crime.

During his time in New York, he’d gone the way of many musicians and started dabbling in heroin. “I was getting so much work that it was frightening,” he recalled of a period that found him playing both society gigs and burlesque houses. “I’d be strung out, but even then, people would come looking for me. I wound up being a heroin addict, and I had $50,000 in the bank. I’d take my first wife down to Bloomingdale’s and buy her diamonds, mink coats. I had money like horseshit. I was fucking up royally, but I learned. There’s something about when you go through that kind of thing, when you need to hustle $300 to $400 a day, which would be equivalent to maybe $1000 now. … I learned to hustle. The kind of person I am, I couldn’t play drums then, spiritually. … I just didn’t feel right.”

Drugs took a physical toll on Jackson, and there were also intermittent run-ins with the law in New York, when he was arrested for stealing or drugs and spent time in jail. On one occasion, he returned to Fort Worth to try to avoid being entered into a three-year program run by New York’s Narcotic Addiction Control Commission. “My feet were so swollen, I couldn’t even wear a shoe,” Jackson recalled. “My father took me to the doctor who birthed me — who was a heroin addict his whole life — and he filled me up with Dilaudid and put me on a plane.” When Jackson realized that his ticket back to New York was one-way, he was furious. Since he had enough money to buy drugs, he managed to avoid the rehab program, quickly fell back into the junkie life, and didn’t call his family for two years.

That could have been the end for Jackson; the list of musician casualties of the heroin plague is lengthy. But in 1974, bassist Buster Williams introduced Jackson to Nichiren Shosu, a form of Buddhism whose devotees chant the phrase Nam myoho renge kyo for hours daily. It was this discipline and his concurrent adoption of vegetarianism that kept Jackson alive, enabling him to kick his heroin habit and return to music. At first, he was reluctant to commit to the new regimen. “I said, ‘I’m going to try this for three weeks,’” he recalled. “Then three months had passed. It pulled me together and pulled me out and I was able to focus. I was a Buddhist and a vegetarian for 17 years.”

Shortly after his conversion to Buddhism, Jackson ran into his fellow Fort Worthian Ornette Coleman in Manhattan. Coleman asked Jackson to join his new electric band, Prime Time, for four years while the older musician’s son Denardo, also a drummer, was attending business school. Jackson and Prime Time guitarist Bern Nix moved into Coleman’s loft “after we lost our apartments because we weren’t playing any gigs.” Jackson credits the saxophonist with teaching him a great deal about composition and encouraging him to compose on the flute “because he said I was hearing in that piccolo range.” Coleman called his style “harmolodic,” based on a theory of music he devised that posits an equal relationship between harmony, motion (rhythm), and melody and abandons conventional key and pitch. After rehearsing in the loft for months, he and his group traveled to Paris, where they played concerts and recorded the albums Dancing In Your Head and Body Meta.

Upon its release in 1976, Dancing In Your Head set the jazz world on its ear with its combination of harmolodics and electric instruments, but financial reward did not follow. Instead, Jackson remembers the period as the first of several times in his life when he was part of an acclaimed band that had its progress thwarted by the music industry. “We played Carnegie Hall,” he said, “and then we were booked for a tour of 10 or 12 cities in America, but they cancelled that. We had a sold-out show, a big review in the New York Times. Ornette had already been thrown out of the loft and he was staying in the Carter Hotel, so it totally messed him up. They cancelled everything, and [A&M Records] wouldn’t re-press Dancing in Your Head. That’s the first time I realized, [the music business is] not about making money, it’s about control and power.”

Because the Coleman group gigged so infrequently, Jackson also joined the iconoclastic pianist Cecil Taylor’s band for six months in 1979, recording six albums. It was during this period that the jazz press began to single out the drummer’s aggressively extroverted approach. That same year, he formed the Decoding Society. It’s always been a composer’s, rather than a drummer’s band; Jackson integrates his thunderous playing into the ensembles, rather than making the band a vehicle for his solos.

Over the years, the Decoding Society enjoyed great success for a jazz group, particularly overseas, but its achievements were still subject to the vagaries of the music industry. Two early mainstays of the band were guitarist Vernon Reid and bassist Melvin Gibbs, high school and college bandmates from Brooklyn who were enthralled with jazz-rock fusion and somewhat leery of the idiosyncrasies of older players. Both later enjoyed varying degrees of rock stardom, Reid with the group Living Colour and Gibbs as a sideman for punk rocker/poet Henry Rollins. “Shannon didn’t have the stereotypical older jazz cat’s attitude that we younger cats used to make fun of,” said Gibbs, who still lives in New York. “We were just kids, but he didn’t feel like he had to break you down, then build you back up, so he could keep his band together. He wanted a band of strong people, not a bunch of cowards.”

Reid was impressed by Jackson’s willingness to incorporate elements of popular music into his avant-garde approach — unlike many of his contemporaries who made music that was deliberately impenetrable to all but other musicians. “Shannon wasn’t an ideological avant-gardist,” Reid recalled. “He made the music he made from an outsider’s view, but not to the exclusion of rock and pop — he wasn’t mad at pop music for being popular the way some of his generation are. He synthesized blues shuffles with African syncopations through the lens of someone who gave vent to all manner of emotions. I feel that the collision of values in his music really represents American culture.”

Shining a Light on TAD

Welcome to the Summer Issue 2021