Home News Metro Raising a Stink
SHARE
Facebook
Twitter
Bill Cole says he nearly lost it all for just opening his mouth. If he hadn’t gone public with his complaints about pollution from an Eastside meat rendering plant, if his picture hadn’t appeared in the news, Cole says he would have never been charged with breaking an obscure law that upended his life. Since his arrest four years ago, the 48-year-old father of three says he hasn’t known from one day to the next whether sunrise would find him in his own bed or bunking in a state prison. 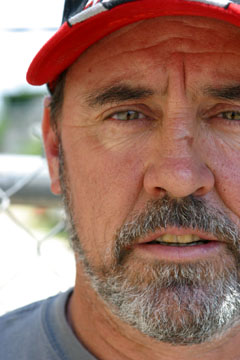 Actually, he was complaining about a stink. Cole was an outspoken critic of Five Star Custom Foods, the rendering plant at 3709 E. 1st St. Under various owners and business names during the last 35 years, the plant periodically has filled the air with noxious fumes and clogged sewer lines with excess grease. In 2002, the city said the Five Star’s grease pits were generating lethal amounts of hydrogen sulfide gas that workers found in city sewers.

But if anyone, in fact, had a plan to silence Cole, it hasn’t worked. The criminal case against him was quietly dismissed last week at the request of the Tarrant County District Attorney’s office — almost four years after Cole’s arrest.

Fort Worth police arrested Cole in August 2002 for “illegal use of equipment” based on an accusation from a Five Star employee who said he saw Cole and another man attempting to steal anhydrous ammonia from the piping that runs along the company’s rooftop. The caustic chemical has numerous legitimate uses, ranging from refrigeration to the making of fertilizer, but it’s also in demand in the drug world for making methamphetamines.

The worker who made the accusation told police he was able to identify Cole in part from a photograph accompanying a Fort Worth Weekly article airing complaints from Cole and others about the noxious smells wafting through the neighborhood from the meat plant.

Cole went public with his complaint about Five Star on June 27. Less than a month later, on July 22, Five Star lodged the complaint that landed the company critic in jail. Released on bond, Cole has been summoned to court many times, only to have his case postponed again and again. His attorney, Abe Factor, has carried several plea bargains to Cole from prosecutors, including one that would have kept him out of jail in exchange for a guilty plea, Cole said. Each time, however, Cole turned them down. He said he wasn’t going to plead guilty to something he didn’t do.

“It’s been the biggest nightmare I’ve ever been through,’’ Cole said. Throughout the ordeal, he worried that “if they can take it this far, I believed I could be convicted for something I didn’t do.’’

The case lingered in the courts for almost four years — far longer than the vast majority of criminal cases. Except in rare circumstances, according to the Tarrant Count District Clerk’s office, most felony cases are resolved in months, not years.

Walt Junker, the assistant district attorney most recently assigned to the case, said he decided to seek the dismissal after meeting with Cole’s attorney. “I looked at the evidence, and we decided it wasn’t as strong as the original DA thought it was,” Junker said. “One of the benefits of Tarrant County’s open-file policy is that occasionally a defense attorney will decide to risk putting his cards on the table also … . Sometimes, one side or other others reconsiders their position and agrees to plead to a lesser change or, as in this case, sometimes our office reconsiders the strength of our case and dismisses it.”

Junker is the third prosecutor assigned to the case. He said Factor’s busy schedule slowed progress, but so did moving the case from one prosecutor to another. “Obviously there is a delay each time an [assistant district attorney] picks up a new case and becomes familiar with it,” he said. “The bottom line is, nobody is happy with how long this case took to resolve. However, I’d rather take a case longer than I want it to and we get things right in the end instead of getting it wrong.

Fort Worth police spokesman Lt. Dean Sullivan said police were duty-bound to make the arrest after the Five Star worker signed a complaint identifying Cole as one of two men he saw on the roof on the plant’s security monitor. He compared the case to a homeowner who is able to identify a burglar pilfering his home. “We’re obligated to act on your credibility,” Sullivan said.

Five Star’s Steve Phillips, identified in records as the person who told police he saw Cole on the security monitor, said this week that he was unaware that the case had been dismissed. He said the plant had been repeatedly burglarized by ammonia thieves before Cole’s arrest. “After he was arrested, we had no incidents of that activity,” Phillips said. Asked if was certain that Cole was one of the men on Five Star’s roof, Phillips said, “I’m just going to leave it at what I told you.”

Cole’s attorney, Abe Factor, was not available for comment.

The meat-rendering facility has a history of making improvements after citizens complain to city or state environmental officials. The improvements seem to make thing better for a while, but eventually problems return.

A Texas Commission on Environmental Quality official, Tony Walker, said the last time the plant had a problem was in 2003 when it was fined $1,100 under the state’s general nuisance law for offensive odors. Plant operators have since “added controls and changed some processes,” and there have been no complaints since late in 2004, he said.

Cole and his wife, Sonia, have plenty of issues. A court system that takes almost four years to dismiss a case is broken, they say.

“Even though they would pass it around, you would think someone would say, ‘Four year? What’s going on here?’” Sonia said. “Every time we had a court date, it was really hard on me. The whole time he was in [the courtroom], I was waiting and wondering if he’s going to get to come back or if they would take him to jail. You can never tell what they can get away with.”

Bill Cole said his anger over a four-year wait for justice is tempered by the fact that the plant does seem to cause fewer problems in his neighborhood.

“When you walk in front of their place, you can still smell that rank odor, but it’s nothing like it used to be,” he said. If he could spin back the hands of time, he said, “I’d have to do the same thing. I don’t know how you go about not being put in jail for complaining. I think I was not only being taught a lesson by Five Star but by the city of Fort Worth as well.”