Home Music The Show Incendiary Boys
SHARE
Facebook
Twitter
From crude, angular, and tough yet imminently accomplished, Incendiary has quickly matured and become less raw, more poppy. The band’s new e.p., Only As Hard As You Make It, isn’t just good for a local band. Based on a few spins of several new tracks posted as one big medley on the band’s MySpace page (www.myspace.com/incendiary), the disc is good, period. 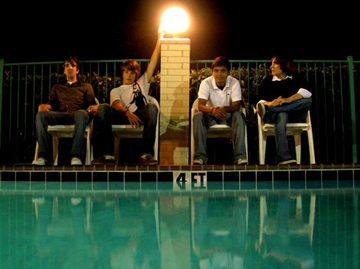 A metallic, punk-ish heart still beats beneath the quartet’s polished veneer, yet instead of propelling movements single-handedly, it functions as part of a multi-tendrilled attack. Clanging riffs crash against jagged walls of rhythm as sturdy melodies unfold gracefully and singer-bassist Cullen Dansby does his neat little trick of sounding like a lovelorn young adult tenderoni with lava in his veins. He’s neither pushover nor bully, and the odd ambiguity he conveys neatly reflects the essence of a band that traffics in obvious references to myriad guitar-based genres but never succumbs to anything less than unique brilliance.