Home Film Film Reviews The Fall of a Sparrow
SHARE
Facebook
Twitter
There are filmmakers who look back wistfully on the Hollywood of the 1930s and ’40s, when the studios had directors and other creative personnel under contract. Why the wistfulness for a system that placed such unfair restrictions on workers? Because nowadays, directors are essentially hired guns, and a single flop can severely damage a fledgling career. In the old days, a box-office failure, if it wasn’t massively expensive, would have been taken in stride by a director’s studio. His employers would simply send him back to work on another project. It meant a director had freedom to fail, or so the nostalgic thinking goes. 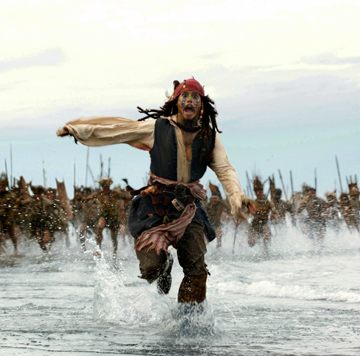 Strangely enough, the freedom to fail in Hollywood has made a comeback recently. The success of the Lord of the Rings trilogy changed the rules; studios on the lookout for lucrative franchises now routinely greenlight sequels to potential blockbusters before the first film has even hit the theaters. (When Superman Returns came out last week, the sequel had already been approved.) Directors are often included in the package, so even if the initial effort underperforms somewhat at the box office, a filmmaker will get a chance to iron out the kinks in a second movie. Thus, Sam Raimi’s underwhelming Spider-Man gave way to a much-improved Spider-Man 2, and Bryan Singer’s X2 told a fluid story that was only possible after X-Men had done all the heavy lifting of establishing its characters. This also means we get a sequel to the Garfield movie that we really didn’t want, but the second chances afforded to the tiny minority of directors who’ve gotten on board with a franchise have been a happy unintended consequence of Hollywood’s new bottom-line thinking.

The movie begins with Will Turner (Orlando Bloom) and his fiancée Elizabeth (Keira Knightley) getting arrested just before their wedding, on the charges of having helped Captain Jack Sparrow (Johnny Depp) escape from the Crown’s custody. I had a lot of trouble following what happened after that. As far as I can tell, Will is dragooned into helping Captain Jack pay his debt to Davy Jones (Bill Nighy), a pirate who resembles a human but appears to have a fully-grown octopus for a head and commands a crew of other half-men, half-sea creatures. At some point, a locked chest containing Davy’s heart becomes the object of a massive treasure hunt for reasons that range from hazy to completely indecipherable.

Director Gore Verbinski and screenwriters Ted Elliott and Terry Rossio are all back for this sequel, and you’d think the first thing they’d fix was the original’s slapdash plotting. Given the tight storytelling jobs that Verbinski has done on movies as diverse as The Ring and The Weather Man, this isn’t too much to expect. Yet the film clocks in at two and a half hours, and it’s so sloppily edited that entire plots are skipped over; when Captain Jack tells his crew that they’re making for land, we don’t see them again until after Jack has been crowned king of a local cannibal tribe, which will make more than a few moviegoers go, “Whuh?” The filmmakers layer on the CGI effects and action sequences that are meant to be thrilling and humorous, such as the one involving three guys swordfighting on a waterwheel that has broken off from a mill and is rolling downhill. Through all of this, you never stop feeling the gears grinding. Not a single moment in the movie feels spontaneous.

All these flaws afflicted the first movie, too, but nobody noticed because of Depp’s outrageously campy performance as the captain. In fact, you’d probably be hard put to remember anything about the first film that didn’t involve him. So of course, the filmmakers give him less to do in the sequel. Oh, wait, that doesn’t make any sense at all. It’s true that the actor seems to have run out of new moves for the character. Still, Depp is the reason for this sequel’s existence, so why give him and the original movie’s fans short shrift? He winds up completely upstaged by Nighy, the British overactor par excellence, who manages to invest Davy Jones with his distinctive personality and genuine menace even though his face is completely covered in prosthetic goo for the film’s duration.

This and other tiny pleasures occasionally bob to the surface amid the flotsam and jetsam — a clever touch at the end setting up a possible third film, and a negotiation-at-gunpoint scene between Knightley and Tom Hollander, two co-stars from last year’s Pride & Prejudice reunited in a very different setting. However, these aren’t enough to keep this bloated, mechanical tub afloat. Unlike the first Pirates of the Caribbean entry, this is exactly the sort of film you’d expect to be based on a theme park ride.