Home News Metro Who’s the Nuisance?
SHARE
Facebook
Twitter
Lynda Sauvlet thought she was doing something good for the community in southeast Fort Worth. She and her husband, Tom, opened All My Children (AMC) Entertainment Center on Wichita Street in the Glen Gardens neighborhood as a place for high school kids to go after school. The center provided tutoring for the TAKS tests and GED during the week and was rented for private parties on the weekends. 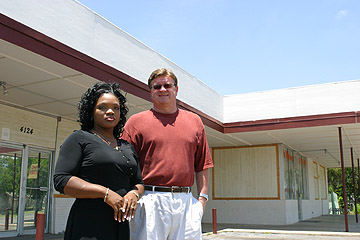 “I knew there was a need for a program that gives kids in that area a place to go that has a positive environment,” Lynda Sauvlet said. “I grew up in that area, and my kids went to O.D. Wyatt High School, so I knew that a lot of these disadvantaged youths were often forced to be out on the streets. … We thought Fort Worth would want a community center like this. … We were so wrong.”

The Sauvlets, who live in Arlington, are now suing Fort Worth, charging that police harassment caused the AMC Entertainment center to close. A major issue: threats from police to confiscate the property through the city’s nuisance abatement program.

Nuisance abatement laws allow the city to take property where crimes “habitually” occur, but only if the city proves in civil court that the property or business owners do not make reasonable attempts to combat the problem.

But complaints from the Sauvlets have sparked an internal affairs investigation by the police department over whether the confiscation threat was properly used under state law and whether police responded slowly to 911 calls when street gangs came to the AMC Entertainment Center and threatened violence after the Sauvlets refused to allow gang members into the center.

Fort Worth Police spokesman Lt. Dean Sullivan said he could not comment on the Sauvlets’ claim, citing the internal affairs investigation. Many police reports are also being withheld until the inquiry is done, which could take up to six months.

But records obtained by Fort Worth Weekly indicate that the department’s threat did not meet the criteria established by the Texas Attorney General’s Office — which advises that the program should be used only if “an inordinate number of calls for police service have been made and six or more arrests for the same type of illegal activity have occurred in the last six months to a year.”

In the AMC’s case, Officer H. D. Woody wrote a letter threatening to close down the business after just four weeks’ operation. Four citations were documented: no permits for a pool table or dance hall, two citations for unlawful carrying of weapons outside of the building by gang members, and one report citing several kids for violating curfew off the property. In the five months the business was open, a total of six police reports were filed mentioning the Sauvlets.

The couple’s problems began on Oct. 6, 2005, when they went to a meeting of a Glen Gardens citizens crime prevention group to explain their new business. The meeting ended up with “racial slurs,” according to the allegations in the lawsuit. “One of the members of the group told us ‘I don’t want to see a bunch of young black boys hanging out in our area, because that always causes trouble,’” Tom Sauvlet recalled.

Edward Briscoe, president of the Glencrest Civic League, said he does not recall the Sauvlets ever meeting with his group and that the league “never pushed police officers to close” the Sauvlets’ business. He praised Woody as being “very responsive to the needs of residents within our community.”

When the Sauvlets held their grand opening two days after the meeting, police marked the occasion with a raid. According to a sworn affidavit by Tom Sauvlet, “the Gang Unit, the Vice Unit, and the majority of the [neighborhood] Police Station came into our building without a search warrant and started to look over the entire Wichita Street premises for drugs, alcohol, weapons, and other illegal activity. … They did not find anything like this, since we do not deal in these kind of activities. We have zero tolerance for this, and our security officers have detectors for weapons and search the patrons carefully before they enter our youth center.”

The raid produced one citation: The Sauvlets had failed to get the proper tax stamp for the pool table, and they did not have a dance hall permit. The couple obtained both within several days.

Despite the minimal violations found, one month later, Woody sent a letter to the Sauvlet’s landlord, Dallas-based Square Foot Inc., stating that the Sauvlets were not addressing “problems occurring at the location” and that the Nuisance Abatement Program would be used to confiscate the property.

Square Foot attorney Robin Foret sent a letter to the Sauvlets on Dec. 6 noting that the couple was in violation of their lease because they were allowing weapons and drugs on the premises and encouraging gang activity and curfew violations.

Tom Sauvlet, an ad sales executive with KRLD radio, said he and his wife had hired security guards, used metal detectors to make sure no weapons were brought into their building, and called police whenever gang members entered their parking lot. In January, the couple met with police and warned them that gangs were causing trouble. “Whenever we called 911, it would take them 20 to 30 minutes to come out,” Tom Sauvlet said. “I just got the feeling that they wanted us to have trouble, and if they let the gangs run around here without any police presence, we would get run out of business.”

Jean Hall’s two teen-age daughters went to the AMC center, and she believes the accusations against the Sauvlets are false. “At first I wasn’t sure I wanted my daughters to be going there, but I went up and checked it out,” said Hall, who lives close by. “Lynda was always there, and they provided a very safe place for our kids to go. And when they started offering tutoring services, I really thought this was an asset to our community.

“What happened was racial harassment, and I am convinced of that,” Hall continued. “Fort Worth never tries to do anything in this community, and when someone from outside the area comes in, they try to shut it down. I could see if they were smoking and drinking and bringing guns in, but that never happened.”

On Feb. 10, Fort Worth police showed up again, after what the Sauvlets said was a minor fistfight in the club, and closed the business down for the night. A week later, the Sauvlets gave up and closed the center. Their relationship with the landlord had deteriorated after the police threat of confiscation, and the couple said Square Foot would not address roof leaks or mold problems.

Tom Sauvlet said he thought it odd that police would take 20 minutes to answer 911 calls, while at least 10 police cars arrived within two minutes of the small fight, which was immediately broken up by security guards. Sauvlet said an officer assaulted him with a billy club that night. According to a police report, only one arrest was made — a minor, on a charge of public intoxication. The report does not say whether the youth was arrested inside the building or in the parking lot.

The Sauvlets aren’t the only ones questioning Fort Worth’s use of the nuisance abatement law. Apartment owners in the Woodhaven area have also charged that the law was used against them over the last year in order to support then-council member Becky Haskin’s push to reduce the number of lower-income residents in the area. The attorney general’s office reported that, as of September 2004, Fort Worth had requested help on 99 nuisance cases — more than Houston, Dallas, San Antonio, El Paso, and Austin combined.

Assistant City Attorney T. J. Patterson, who oversees the filing of nuisance abatement cases, said the city uses the program in a “proactive way.” He said Woody’s threatening letter was proper. Woody “has the right to talk to citizens about crime and take the steps to prevent it,” he said. “It is a holistic approach, to use the tools in our power to stop gang activity and other crime.”

But Fort Worth Councilman Donavan Wheatfall thinks the situation has revealed major problems. “We need to have the legal grounds and justification for filing a nuisance abatement or even sending out a letter,” he said. “When we deal with impoverished young people, we know that there might be a criminal element that comes along with that. But we ought to be supportive of a business that reaches out to at-risk kids, not finding ways to put them out of business.”

Lynda Sauvlet said the whole experience has angered many black residents of southeast Fort Worth. “Race was definitely a factor in all this,” she said. “All we were doing was trying to help kids. I guess they don’t want that in that part of Fort Worth.”