Home Music Listen Up Soledad Brothers
SHARE
Facebook
Twitter
Judging from the sleeve inside The Hard Walk by Detroit’s Soledad Brothers, you’d think you’d be in for something really special. The list of instruments includes such exotic specimens as fuzz piano, sitar, and vibraslap. And if you knew that the Soledad Brothers played blues, you’d probably be even more excited — blues mixed with Calexico-esque instrumentation must be really great, especially when brewed in the Motor City. 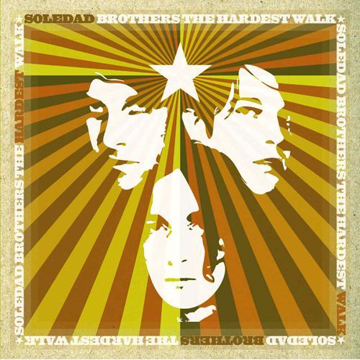 And then you’d hear the angular chug of the opening track, “Truth or Consequences,” which sounds a little like the Minutemen covering a Sticky Fingers-era Stones tune (replete with flabby sax flourishes), and think you’d just stumbled upon the Next Big White-Boy-Garage-Blues Thing.

Then the album shifts into “Downtown Paranoia Blues,” a coolly named number that unwittingly apes Reverend Horton Heat (though sans the Rev’s greasy hotlicks), and disappointment prevails. The pompadoured picker’s shadow doesn’t hang around long enough to lift the song (or any of ’em, for that matter) above — yawn! — 12-bar, turn-up-the-gain, hope-to-play-Austin-City-Limits dreck. What can ya do.

To be fair, the aforementioned track has its winning attributes. The lyric “I’ve got that paranoia, and it’s spinnin’ in my head / I can see her layin’ down / In half a million beds” is a gem. And despite the lack of any chills-inducing solos, the tune’s freight-train groove and distorted vocals mesh nicely. They also evoke the ghost of MC5, a band whose spirit any contemporary outfit would do well to stir.

“Dark Horses” also shines, carrying minor-key tremolo gloom over desolate organs and singer Johnny Walker’s plaintive tenor. “White Jazz” might be a joke, but it’s a brief blast of psychedelic bliss, as two guitars claw at each other over a sax afloat on a nebulous cloud of space-echo.

But as the album winds through the obligatory downtempo doldrums, such as “Sweet and Easy” and “Let me Down,” the garage-blues affectations get tiresome. It’s as if the North Mississippi All-Stars decided to make a record in Arizona and let the desert bake away most of the flavor.

At their best, the Soledad Brothers convincingly swipe from Mick and Keef and Wayne Kramer by adding grit and crunch to commonplace R&B. There are enough political digs to appeal to angsty kids too hip for Punkvoter.com, and a couple of songs, such as “Good Feeling” and “Loup Garou,” betray shrewd and likable pop sensibilities. Yet too much of the progessive stuff gets bogged down in unconvincing Delta-bluesy tangents. If you’re from Detroit, your pedigree practically demands that you rev engines and shatter glass. Though they seem to know what they’re supposed to do, the Soledad Brothers would prefer to idle and merely scratch the surface.