Home News Feature A Whiff of Payback
SHARE
Facebook
Twitter
Friends and enemies continually circle the political planet of Tom Wilder, a Republican mainstay who recently won his fourth term as Tarrant County district clerk. Supporters say he efficiently manages business operations in county courts and keeps a watchful eye on taxpayer dollars. Foes say he is mean, vindictive, and slicker than a greased ice cube, which is why he thinks he can kick to the curb several longtime county employees who dared to buck him, while creating a high-paying job for a political friend, all without suffering any voter backlash. 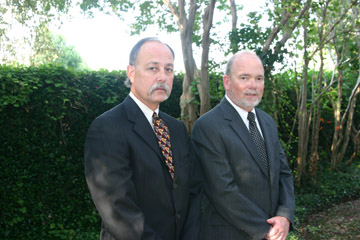 Some folks in county circles compare him not so lovingly to “Mr. Haney,” the scheming opportunist of Green Acres. Yet criticisms seldom stick, whether he is limiting access to public records, protecting his turf by fighting local judges’ attempt to hire a court administrator, or eschewing a pre-trial release program created to get low-flight-risk defendants out of jail quickly and reduce jail overcrowding.

Most people have even forgotten that it was Wilder who loosed former Sheriff David Williams on Tarrant County for a bizarre reign. Wilder, a Republican back when the GOP wasn’t cool, recruited an unknown D.A.R.E. police officer from little ol’ Haltom City to run for sheriff in 1992. Democrats were losing their stranglehold on local politics, and Wilder decided Williams could win if he ran on a platform of keeping kids off drugs, overlooking the fact that a sheriff’s main job is to manage a jail. A local reporter recalled telephoning Williams during his 1991 campaign and asking why he wanted to become sheriff. After a long pause, Williams finally said, “You’ll have to call my campaign manager and ask him.”

The reporter called Wilder, who, as anyone who knows him can attest, is rarely short of words.

Williams won the election, created chaos, served eight years before self-destructing, and is now a punch line. Wilder kept chugging along, never losing credibility despite the occasional bump in the road. His most recent brouhaha registers as a small blip on Wilder’s worry scale.

“You’ve got a few people who are going to do anything they can do to scuttle this,” he said. “It’s up to me to stand my ground and tell the truth, and that’s what I’ve done.”

Wilder’s image as the Teflon Man hasn’t stopped co-workers from butting heads with him, accusing him of retaliation, political back-scratching, paranoia, and megalomania. Or, to put it simply: “Tom Wilder is not a nice person,” said Pete Hinojosa, who will be out of a job if Wilder has his way.

After working for years as a manager under Wilder, Hinojosa ran against him in the recent election. And lost. Afterward, Wilder announced an office reorganization plan that would eliminate four jobs — a vacant position and three manager positions. Wilder said the office is top- heavy with managers and needs to be streamlined, and it is just coincidence that the three managers who would lose their jobs are political adversaries. He estimates his reorganization would save $100,000 a year if the changes are approved by county commissioners.

One of Hinojosa’s supporters during the campaign was accounting manager Bobby Cook, whose job would be another of those eliminated. He’s not buying Wilder’s explanations.

“Retaliation is wrong,” Cook said. “If he could fire us he would, but we are exemplary employees.”

A third man slated to lose his job is records manager Cruz Hernandez, who crossed Wilder by refusing to help in the district clerk’s most recent campaign, although he did in years past.

“This is the first time I haven’t supported him since he’s run for office,” Hernandez said. “I was neutral in this race. I ended up getting the shaft anyway.”

He said he shunned Wilder’s campaign earlier this year because the district clerk had begun degrading him in front of co-workers. “He has harassed me and humiliated me for the past two and a half or three years,” Hernandez said. “He’s called me stupid in manager meetings and belittled me in ways that made me feel like a piece of dirt under his feet.”

Wilder’s reorganization plan also calls for the creation of several new jobs, including that of a chief deputy clerk position that would cost the county more than $100,000 a year. His foes say the position was designed for Parker County Judge Debra Dupont, a political ally who recently lost her bid for re-election. Dupont worked closely with Wilder and his staff during the 1990s while she was an assistant Tarrant County district attorney.

Wilder said Dupont will be a candidate for the job if he’s allowed to add it but denied it was created specifically for her. There is no guarantee she would want the job, he said, since she might earn more in private practice. “I’m sure people want to try to jump to conclusions,” he said. “Debra has plenty of other opportunities out there.”

During an interview for this story, Wilder referred to the position as a “general counsel,” someone with a master of law degree who could provide legal advice. The district attorney’s office routinely provides legal help to the district clerk. Wilder’s critics say an in-house general counsel position is unnecessary and wasteful.

Marvin Collins, chief of the DA’s civil division, didn’t give the plan a glowing endorsement. “We provide an abundance of legal guidance, advice, and representation to our district clerk,” he said. “If there has been any complaint about our availability or our willingness to provide that advice, we don’t know about it.”

“I’m still planning on the DA representing me in court, but we have a daily need of readily available legal advice,” he said.

Wilder wasn’t swayed by assurances that the DA could provide the legal advice and representation he required, and at no extra cost to taxpayers. “I prefer to have the position that I put in the budget,” he said.

Wilder knows the reorganization, coming on the heels of Hinojosa’s failed rebellion, looks like retaliation. But he insists he’s simply a manager streamlining an office that he has overseen for a dozen years and knows inside and out.

“Your political enemies can make all the allegations they want,” he said. “I considered this long before the political season arrived last year. I made my personnel decisions based on what’s best for the office.”

Hogwash, said Hinojosa. “Wilder will repeat a lie or half-truth long enough until people believe him,” he said.

It’s up to county commissioners to determine whether Wilder is playing political games and whether Hinojosa, Cook, and Hernandez keep their jobs. Budget discussions begin in a few weeks and should provide plenty of intense public debate about Wilder’s plan.