Home Music Music Feature Time Out of Mind
SHARE
Facebook
Twitter
Playing bass with Black Oak Arkansas, Rocky Athas, “Smokin’” Joe Kubek, Ray Wylie Hubbard, Rocky Hill, Marc Benno, and many other musicians has given Guthrie Kennard a lifetime of adventure, carrying him across the United States and abroad to prestigious gigs from Fort Worth’s Caravan of Dreams to Liverpool’s The Cavern Club. 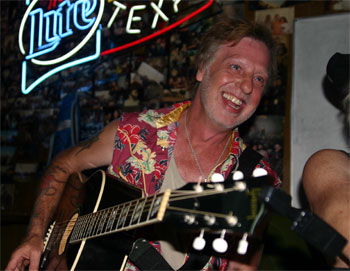 Playing solo is a different story. Landing cushy gigs without a marquee name is difficult, and on a recent Thursday he performed for only a handful of salty but friendly patrons at the 2500 Club, one of Fort Worth’s earthiest biker bars. Customers there love him, and he shows up weekly to test-drive new songs and to study interesting characters for future lyrics.

“Hobo Travelin’” tells of a homeless guy named Junior who comes into the bar each Thursday, stashes his bedroll in a corner, sings along, then disappears into the night. “Katie Mae” is about a seamstress who digs motorcycles. “Preacher” is about a patron who served in Vietnam. (“You can tell by looking into his eyes that he’s been places most people haven’t,” Kennard said.) Not yet written is a song about the burly biker with a swastika emblazoned across his gut who grabbed Kennard’s hat one night and didn’t want to return it.

Finding pathos comes easy for a songwriter who has faced more than his share. Most recently, he’s battled a life-threatening illness and gone through a divorce that left him with little more than a Jeep and a guitar.

The wear shows, and nobody disputes his credentials when Kennard sings in a ragged-but-right style reminiscent of Bob Dylan, circa Time Out Of Mind. Still, life’s bruises haven’t left him jaded; he’s gracious, and it shows from the stage. People root for him.

“I don’t see how a guy can be so nice after having been in the business as long as he has,” said local singer songwriter James Michael Taylor, who met Kennard earlier this year at MacHenry’s and was blown away. Taylor sits in with him at the 2500 Club some nights.

Being nice is one reason Kennard is in demand. Bandleaders like players who show up on time with smiles on their faces and do their jobs without ego trips. But even a laid-back musician accustomed to lean times has limits. He recorded his first solo album, Ranch Road 12, for England-based Armadillo Records in 2005 and garnered positive reviews. But a longtime battle with hepatitis C finally got the better of him, and he underwent chemotherapy in 2006, leaving him unable to tour or promote the music.

“I beat it, but for the past six months I haven’t been able to work the record because I was too sick,” he said. “I got the record company guy wondering why I’m not out selling c.d.’s, when I’m here trying to save my life.”

The music benefited from Texas Music pioneer Ray Wylie Hubbard, who was a hard sell initially when asked to produce the project. “I had to pass an audition,” Kennard recalled with a laugh. “Ray is one of my favorite writers, and I knew we would be compatible.”

Hubbard was blown away by the insightful lyrics and growling delivery and agreed to oversee the recording. Kennard remembers Hubbard saying, “We’ll make a real record and throw it out and see what happens.”

Now Kennard (and his hair) are back. On the Thursday he performed at the 2500 Club, he had played an early evening gig at Granada Theater with Athas. After the 2500, he headed straight to Austin to record with Debra James, a North Texas singer-songwriter working on her debut album.

He’s been performing his new songs mostly by himself with just an acoustic guitar and a mic, which sounds good but not like the album.

A band is in the works, and once they’re tight, Kennard said, it’s back on the road.

“When I play bass for other people, I give it all I’ve got,” he said. “But I’d rather go out there and do the stuff that I’m writing.”