Home Film Film Reviews Trippy Dick
SHARE
Facebook
Twitter
Back in his heyday some 30 years ago, pulp author Philip K. Dick was the literary equivalent of a paranoid nut-job. Some of his more popular edgy, Orwellian dramas have already been given the Hollywood treatment (Total Recall, Minority Report). Some have come out of the studio wringer in decent shape (Blade Runner). Others, uh-uh (Paycheck). But, in different ways, each has failed as an honest realization of Dick’s work and as a stand-alone cinematic experience. Until now. 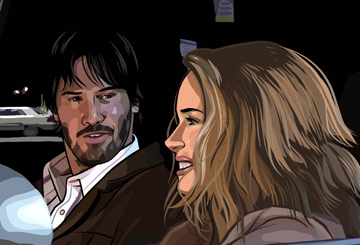 Directed by Richard Linklater, A Scanner Darkly manages to approximate the winning chaotic quality of Dick’s 1977 book of the same name. And like a good adaptation, the movie stays loyal to its source material but doesn’t shirk from expanding upon it.

The Austin director builds upon Dick’s hallucinogenic yarn not by messing with the storyline — he stays true to it — but by using crazy, hallucinogenic visuals. The technique he employs is called Rotoscoping, and it’s a special effects style in which animation is laid over actual film footage. The shtick was gratuitous in 2001’s Waking Life, a pretentious, pompous collection of soliloquies and conversations about faux-philosophical bullshit. In A Scanner Darkly, however, the special effect lets viewers see reality through the eyes of the zonked characters.

The reality in A Scanner Darkly is that the government has taken a fascist turn in the war on drugs (nothing sci-fi about that). Big Brother watches everything, and druggies drop the dime on one another to keep themselves from going behind bars.

As in our world, nothing in Scanner’s world stops people from wanting to get high. The drug of choice for most folks is “D” (as in “death”). One of the opiate’s side-effects is that it heightens paranoia, which as you can imagine can be a little unsettling for inhabitants of a police state. The side effect is even more problematic for Bob Arctor (Keanu Reeves), a narc for the Anaheim Police Department.

If the onscreen experience is a little screwy for viewers, it’s equally wacky for the characters. When Bob and his fellow detectives go undercover, they wear “scramble suits” — skin-tight long-johns that flash like Day-Glo Rubik’s Cubes and protect their wearers from being easily identified. The narcs, naturally, are not only unrecognizable to bad guys but also to one another. The camouflage allows Bob, whose street name is “Fred,” to indulge as often and as much as he damn well pleases.

The problem is that his apartment is under heavy surveillance. Bob typically gets high with his friends, and, as he discovers, someone in his circle — but he’s not sure who — is under investigation for big-time dealing. The suspects include his two roomies, Barris (Robert Downey, Jr.) and Luckman (Woody Harrelson), his love interest Donna (Winona Ryder), his wigged-out neighbor Freck (Rory Cochrane), and possibly Bob himself. On the other hand, maybe he’s the guy doing the investigating — in this story, it’s never quite clear. Adding to the confusion, Barris begins telling the cops in secret that he believes Bob works for a radical terrorist cell.

Though the viewer’s head swirls from trying to piece everything together, Linklater does the seemingly impossible and keeps your interest. His method: transferring to Rotoscope the paranoid delusions that Dick renders so well in prose. None of the other movies used jittery visual effects to capture the jittery vibes of Dick’s books. Instead, the films relied on set pieces and identifiable actors and, as a result, seem quaint by comparison: Blade Runner’s once-state-of-the-art tableaux have aged about as gracefully as a Texas Instruments calculator, Total Recall is bogged down by the Governator’s bad acting, and Minority Report hinges on wardrobe changes. But A Scanner Darkly isn’t hindered by sins of the flesh. Even when nothing’s happening here, the suspense, in the form of swooping noirish grays and blues, makes you feel that something will. Hanging around to find out becomes, like D for Bob and company, a hard habit to kick.