Home Film Film Reviews Stone Monument
SHARE
Facebook
Twitter
I feel like I’m having a flashback to the early 1990s, because I’m pissed off at Oliver Stone. Again. I didn’t think he could do it. He was once one of Hollywood’s most vital talents, certainly its most controversial. 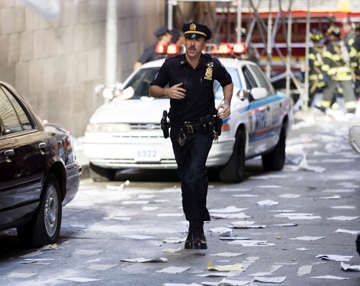 In those days, he wowed me with his visual and dramatic verve, wedded to a social consciousness that helped him indict corporate greed in Wall Street and evoke war’s chaos and terror in Platoon. Yet as often as he thrilled, he also frustrated me. The history in JFK was shoddy, the satire in Natural Born Killers was vile and off-the-mark, and in Heaven and Earth, his sadistic fetishization of torture made me feel like I’d been beaten with clubs by a passing gang. All the overheated rhetoric, all the paranoid egomania, all the bad dialogue, all the wretched music — it was all often too much to handle.

He mellowed out around the time he turned 50 and started making less personal genre pictures such as U-Turn and Any Given Sunday that were overblown, occasionally interesting failures. Nevertheless, after watching the mess that was Alexander, I figured he’d become a filmmaker I could safely ignore. How wrong I was! His latest movie, World Trade Center, manages to get under my skin in a way I didn’t think possible for an Oliver Stone film. It’s bland, mediocre, and safe.

The movie is based on the experiences of Sgt. John McLoughlin and Ofc. Will Jimeno, two real-life NYPD officers who on Sept. 11 were stationed at Port Authority, some miles removed from the World Trade Center site. It begins well enough, with McLoughlin (Nicolas Cage) and Jimeno (Michael Peña) going about routine business until one of them sees a jet overhead flying lower than usual. The two see the images of the burning skyscrapers on tv before receiving orders to head to Lower Manhattan with their fellow officers to help evacuate the buildings. The chaos increases as they make the trip in a commandeered city bus. There’s a great little touch when a taxicab cuts in front of them to make a right turn. Even in a disaster, New Yorkers will be New Yorkers. As the cops gather rescue equipment and head into Tower One, it still doesn’t feel like they’re stepping into a full-fledged disaster until the skyscraper implodes, trapping McLoughlin and Jimeno under 20 feet of rubble. The movie to this point is deftly executed, culminating in a sequence that shows you what it must have been like to be on the concourse level of one of those towers as everything fell in.

Unfortunately, once the two cops are immobilized, Stone and screenwriter Andrea Berloff can only go in the most predictable directions. The filmmakers aren’t bold enough to stick with the two cops as they try to keep each other’s spirits up and wonder whether they’ll ever be rescued. Stone and Berloff wind up showing us pastel sketches of the cops’ home lives, with Maria Bello and Maggie Gyllenhaal playing their wives. (These actresses are criminally overqualified for what they’re given to do. As is usual with Stone’s movies, the women are there to shed pretty tears for their brave, beleaguered husbands.) This plotline is responsible for the movie’s one glaring misstep, when McLoughlin sees an apparition of his wife and discusses the state of his marriage with her, concluding “I’m stuck.” Poor man! It’s bad enough to be pinned under hundreds of pounds of concrete and steel, but to be trapped in a metaphor as well is worse.

In other places, Stone exercises an admirable directorial restraint, but the dramatic tension in his movie drops to zero because all the characters are shown in the best possible light (except possibly for NYPD Officer Dominick Pezzulo, played here by Jay Hernandez). Despite being set on one of our nation’s most terrible days, the film doesn’t express any sort of emotion at all. It’s too busy praising the heroism of everyone involved with the rescue operation. These people deserve praise, of course, but the movie doesn’t tell us anything new about what they did or anything meaningful about who they were.

All in all, this isn’t really a movie so much as it is a cinematic attempt at a WTC memorial. It tries to be noble and uplifting in the same way as too many other Hollywood films about real-life catastrophes, which makes it as toothless as Michael Bay’s Pearl Harbor. With its elegiac tone unrelieved by any notes of humor or messy feelings, the movie completely anesthetizes you to the horror of the attacks. This may win over a few uneasy viewers, but it also negates the film’s attempts to pay tribute to the real-life heroes at the scene. By comparison, United 93 dared to be disturbing and terrifying, and in doing so made itself into a much more moving tribute to the passengers aboard that doomed flight. World Trade Center, on the other hand, is conventional and fatally placid. It’s a feel-good movie about 9/11. I don’t think that’s right.