Home Music Music Feature In the Fry-ing Pan
SHARE
Facebook
Twitter
I’m a senior journalism major at the University of North Texas, and like a lot of undergrads in Denton, I’ve taken to Fry Street as a comfortable home away from home. 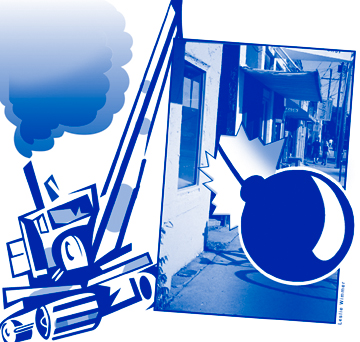 With its abstract murals, narrow sidewalks, and tastefully grimy bars like Cool Beans, Riprocks, and The Garage, the Fry Street area of Denton shares with Sixth Street in Austin and West Seventh Street in Fort Worth a long history of hipness. Ever since hang-outs first started popping up around Fry in the 1970s, the modest-sized area has been a well-kept yet very well-known secret. Dozens of local bands that have developed national and international profiles got their starts there, including The Polyphonic Spree, Centro-matic, Slobberbone, The Toadies, and Midlake. That the spot might lose its organic, funky, friendly vibe is a legitimate concern among me, my friends, and some other Fry Street scenesters, and if you give a damn about local music, you should be worried, too.

Earlier this year, Houston-based developer Buster Freedman bought a block of land that stretches from Fry to Welch streets, a section full of independently owned restaurants, bars, and stores. As of right now, nobody knows for sure what Freedman is going to do. His initial plan involved razing the entire block to make room for University Town Center, an upscale 50,000-square-foot mixed-use neighborhood similar to Montgomery Plaza and Southlake Town Square but with student housing.

The developer has been dodging reporters and didn’t return my phone calls, but he recently told the Denton Record-Chronicle that he and his team are “moving forward with our project.”

Raven Oak is a 28-year-old musician, UNT grad, and leader of Save Fry Street, an ad hoc organization dedicated to ensuring the area’s unique character is preserved throughout current and future development projects. Oak said that if the block is flattened and replaced by retail shops like The Gap, Baby Gap, and Old Navy, Denton’s oddball ambiance will be jeopardized. Apartments could deliver a harsh blow to local music and the almost 30-year-old Fry Street Fair — since housing typically brings restrictive noise ordinances and a 10 p.m. average cut-off time.

But not everyone’s ready to lynch Freedman just yet. Chad Witworth graduated from UNT in 1998 and now owns both SideBar and The Garage, two holes-in-the-wall on Avenue A. He sees the development as a mixed blessing. If Freedman decides to push forward with retail and apartments — and also spread some fresh concrete and paint — foot traffic at Witworth’s joints may increase. “I love Fry Street, and I love what it’s like and the historical value of it,” Witworth said. “But you can’t stop the big man with the money.”

Witworth also thinks nearby housing might help give Denton’s music scene a shot in the arm. “If they’re going to put apartments in there, that puts people living right on the street,” he said.

Last semester, five friends and I ritualistically piled into a booth at Mr. Chopsticks, where we noshed on egg rolls and edamame, took embarrassing photographs of one another, and, for about an hour, forgot about school. Mr. Chopsticks sits near the corner of Hickory and Welch streets, just a few feet away from a parking lot where, in February, a UNT student strolled upon a 400-pound wild boar sprawled out asleep. Last week, Mr. Chopsticks was given its walking papers; it will close Sept. 1.

If you want to know more about what’s being done to preserve one of North Texas’ hippest locales, visit www.savefrystreet.com. And, if you haven’t already, take the trip up to Little D and check out Fry Street — before it’s too late.