Home Film Film Reviews The Magic Man
SHARE
Facebook
Twitter
A big draw at this year’s Sundance Film Festival, The Illusionist didn’t do much for me except remind me of the awesomeness of Paul Giamatti, which is no small achievement. Giamatti found his greatest success in American Splendor and Sideways, playing sad sacks who were hanging by a thread. If you followed his career before that point, you know that this diminutive, baggy-eyed, balding, paunchy character actor can do much more: a dictatorial Hollywood executive in Big Fat Liar, a wisecracking hostage in The Negotiator, a credible Andy Kaufman in Man on the Moon, and a passing bellhop dispensing a cigarette and some wisdom to Julia Roberts in My Best Friend’s Wedding. (Of course, who could forget Pig Vomit in the Howard Stern biopic Private Parts?) Yet the trainwreck parts are the ones that have grabbed our attention, and Giamatti could have kept playing them until he wore us out or finally won an Oscar. His relatively undistinguished work in Lady in the Water suggests he has exhausted the role. 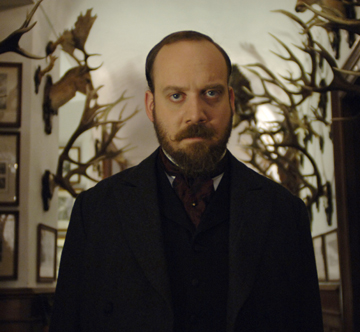 With The Illusionist, he’s in completely different waters. Giamatti plays Chief Inspector Walter Uhl, a veteran detective in Vienna’s police force in 1901. The time period and setting alone would demand something new from this actor, but the character is different, too. Uhl is not only a sharp criminal investigator but also a canny political animal who’s worked and played his way up the food chain. No doubt from having cleaned up a few of their messes, he stands in the good graces of the Austro-Hungarian Empire’s royal family, most notably Crown Prince Leopold (Rufus Sewell), the heir to the throne. The empire’s social elite and much of the city defers to Uhl, knowing that he’s in line for chief of police and perhaps larger titles in the future.

The movie makes him the earthy counterpart to the tall, slender, otherworldly Edward Norton as the magician Eisenheim, and Giamatti does indeed look the very essence of bourgeois solidity in a waistcoat and full beard. The actor sinks his nasal voice down to its baritone register, where it sounds almost plush. He convincingly replicates the manners of a butcher’s son who has spent much of his life around aristocrats — check the scene where he has lunch with Norton and retains his air of authority even when he talks while chewing.

More importantly, Giamatti dials down his usual high-strung nervousness to capture the swagger and sense of entitlement of a man who’s extremely comfortable wielding power. When an elderly, well-dressed gentleman in a theater utters something borderline slanderous about the crown prince, Uhl rounds on him and cows him into silence with a single menacing question: “What is your name?” Norton’s magnetic performance has drawn much of this movie’s positive notices, and he’s quite good here, but it’s Giamatti who’s truly revelatory as a morally compromised, keenly self-aware rationalist confronted with the biggest case of his life.

Among other things, Uhl is also an amateur magician, which is why he’s rapt with amazement when he watches Eisenheim perform his physics-defying tricks. As a boy, Eisenheim fell in love with a girl named Sophie when his father made the furniture for her aristocratic family. Years after they were driven apart, Eisenheim returned to Vienna, and he now plays to packed houses and royal audiences. Among them is Sophie (Jessica Biel), who now bears the title of Grand Duchess von Teschen. The two of them rekindle their childhood romance, which is dangerous because, for political reasons, she’s engaged to the crown prince, who’s mean when he’s drunk. The situation leads to violence, and Uhl is torn between his admiration for the magician and his loyalty to his royal patron.

Writer-director Neil Burger adapts the movie from a short story by Steven Millhauser and ends up reworking it extensively. Burger’s previous film was the 2002 documentary-style thriller Interview With the Assassin, a film completely different in tone and technique, but both of them are essentially puzzles that make you try to guess what game the filmmaker is playing with us. Unfortunately, pulling off this sort of ambiguity requires more storytelling skill than Burger has. The Illusionist affords him a much higher budget than his debut film did, and he revels in it, creating a distinctive look by using sepia tones and borrowing irises from early cinema. (Minimalist composer Philip Glass also helps by giving his spin on the textures of Viennese orchestral music.) Burger has a flexible style and works very well with actors — even the lightweight Biel is credible here. Yet he never generates any real sense of wonder, no matter how wizardly Eisenheim’s prestidigitation becomes. The big picture never hangs together — the filmmaker is so absorbed in telling the story of Eisenheim’s greatest trick that his movie emerges as too cerebral for its own good, even though it’s rooted in forbidden passion. That’s why the actors, especially Giamatti, come out with this picture tucked away in their sleeves.