Home News Metro Snarled and Snarling
SHARE
Facebook
Twitter
You’re on I-35, headed north out of Fort Worth. You’re trying to get home but it’s 5:30 p.m., so you’re not going anywhere. Again. You start to feel like Michael Douglas’ character in Falling Down. You want to bash something. You just want another lane or two. Why the hell isn’t there another lane or two? 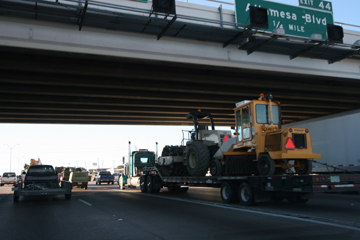 The answer is simple: There’s no money. Or not enough money. Not enough money for the widening of I-35 or for adding several lanes to the 121-183 corridor. Or for most of the 48 Texas Department of Transportation (TxDOT) projects in Tarrant County that have already been approved.

Highway planners never have as much money as they figure they need, but the disconnect between funding and overloaded freeways is getting worse fast around here. In the last 25 years, road capacity in Texas has only increased 8 percent, while traffic has shot up by 95 percent.

And in Tarrant, it may be worse than that. “We’ve simply grown much more quickly than anyone anticipated, and our infrastructure hasn’t kept pace,” said TxDOT spokesman Michael Peters.

TxDOT grades roads from A to F, he said, with A being a clear highway and F indicating not moving at all. “I-35 from below I-20 all the way to 820 [north] is generally a D-minus during morning and evening rush hours,” he said. “That means it’s moving, but very slowly. And that turns into an F in a hurry if you have any kind of incident on the road.”

Transportation officials said that, while road construction is desperately needed, public transportation, especially light rail, is going to have to carry more of the load in the future. And more and more emphasis will be placed on things like carpooling.

In fiscal year 2005, the state transportation agency took in revenues of just over $7 billion, according to chief financial officer James Bass, from the state gasoline tax, the portion of the federal gas tax that’s returned to the state, motor vehicle registrations, and a couple of other sources. But Bass, (no relation to Fort Worth’s Bass family), said that maintenance of current highways, planning and design work, right-of-way purchases, and the 25 percent of the state gas tax that goes to fund public schools leaves “only about $700 million for new road construction or expansion of current roads.”

To put that number into perspective, the projects already planned — and in many cases already approved by the Federal Highway Administration — just for Tarrant are going to cost roughly $2.7 billion. About $1.75 billion of that has been authorized, leaving a shortfall in this county alone of $944 million, or $244 million more than the entire state has to work with annually.

“And it’s only going to get worse,” said Bass. “With the needs that have already been identified to expand the system, between now and 2030, there will be an $86 billion shortfall.

To make up that difference, the state theoretically could increase the taxes on gasoline and diesel fuels. “But that’s not going to happen,” Peters said. So instead, transportation planners are looking at what he calls “innovative public-private partnerships” — toll roads and toll lanes.

In 2003, recognizing the need for regional coordination of highway and transit projects, the state transportation board developed a plan to give eight major metropolitan areas in Texas more control over funding of those projects. In the Fort Worth-Dallas area, the North Central Texas Council of Government (NCTCOG), covering counties with about a third of the state’s population, directs the spending of about half a billion dollars annually in transportation funds.

Dan Lamers, in charge of transportation planning for the regional council, said North Texas needs about $35 billion in the next 25 years in new road and light-rail construction. “Under traditional funding we’d get maybe $15 billion, so that’s a huge shortfall,” he said, “which means we’re going to be aggressively innovative, particularly in going after private sector funding for new toll roads and toll lanes that can be added to existing roads.”

Major local players aren’t willing to let the council alone push the buttons on highway improvements, however. Last year the newly formed 35W Coalition convinced NCTCOG to push work in the Alliance area higher on the schedule — up to 2008 rather than 2015.

“What we did was get a group of 153 businesses in the area, from American Airlines to the BNSF railway company, whose employees are all affected by the bad traffic in the area,” said chairman Mac Churchill, who owns the Mac Churchill Acura car dealership. “Then we began to interface with TxDOT, with the COG, with local politicians, anyone we could think of to let them know there was massive support for the road improvement to be done.”

In other words, the Alliance group, where Ross Perot Jr. pulls a lot of weight, lobbied their butts off. “Yes we did,” said Churchill. “Houston and Dallas have had organized groups for years, and my opinion is that Tarrant has been getting the short end of the stick. We’ve got I-35, the vital corridor for Tarrant running through the county with two lanes in each direction. That’s just incredible. So we decided be the squeaky wheel, and now we might be getting a little bigger piece of the pie.”

The improvements will begin with the northern I-35/Loop 820 interchange and then, in all likelihood, extend up I-35W all the way to the Texas Motor Speedway. When the work is complete, the interstate north of 820 will include three free and two toll lanes each way, with three-lane access roads in each direction as well. “So we’ll be moving from four to 16 lanes,” Churchill said.

He said his group didn’t have to promise private sector money to build the toll lanes in order to get the construction moved up. “I think there were already four or five companies willing to bid on that end of things before we were even formed. What we really did was bring the different agencies and political groups together to put a focus on our needs here, and it looks like we’re going to get it done.”

Peters said the area north of 820 is a priority, along with Airport Freeway and northeast 820. “That’s all being looked at as one corridor, because if you just expand one of them, you just move the problems down the highway,” he said. But the TxDOT spokesman said that road expansions alone will never meet the needs of the region. “There will never be enough lanes to have a high level of service during rush hour when there is an accident.”

Lamers, the NCTCOG planner, said that the real solution, in addition to construction and private-public partnerships, is to get people to change their behaviors. “We need to attack the transportation demand in order to make any progress,” he said. “We’ve got to get people out of their vehicles; that’s a priority. That would be where light rail comes into play.” The agency needs to coordinate traffic signals, encourage telecommuting, get people to shift their working hours, he said. “And then we’re going to have to get people to share a ride. If everyone did carpooling one day a week, that would remove 20 percent of the vehicles, which would probably eliminate 50 percent of the congestion.”

Construction of bigger roads and highways comes only after those things, he said. “Finally, if we can’t get out of our vehicles and we can’t get you to carpool, then our last priority is expanding the system.”