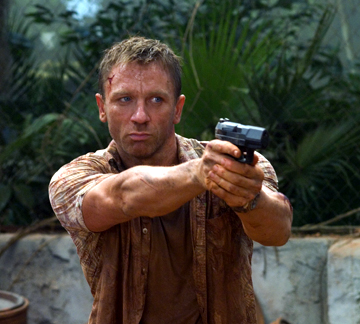 That wasn’t necessarily Pierce Brosnan’s fault, but his presence was a symbol of the creative torpor and cartoonishness that had reduced this once-proud series to ashes. (A more potent symbol would be either the invisible car in Die Another Day or Denise Richards as a nuclear physicist in The World Is Not Enough.) With Brosnan’s departure, the powers that be saw an opportunity to usher in a new attitude along with a new actor, and to their credit they seized it. Casino Royale is, unlike the last five Bond films, based on one of Ian Fleming’s novels. Not coincidentally, it’s also a major improvement on what has come before. So everyone at Danielcraigisnotbond.com can suck it.

Speaking of the lead actor, let’s deal with him first. Craig is the rangy, not overly famous 38-year-old Englishman who’s been tapped as the new Bond. You may have seen him in Munich or Road to Perdition or Infamous, but not even his starring role in Layer Cake spotlights him so relentlessly as this role does. He holds up better than all right. He has neither Connery’s sense of fun nor Brosnan’s sangfroid, and with his blocky physique and busted nose, he’s definitely not as pretty as his predecessors. On paper that may seem unpromising, but Craig turns it to his advantage by playing Bond as a guy who wears refinement well despite not being born to it. The actor brings an element of hard-ass to the character that we haven’t seen before and takes away the note of self-satisfaction that has crept into all the Bonds who’ve stuck around long enough to settle into the role. This probably comes easily to a thespian who’s new to the part and not a household name, but it’s still something to appreciate.

Fleming’s first Bond novel, Casino Royale was turned into parody the last time it was filmed, in 1967. (Woody Allen co-starred as 007’s bungling nephew Jimmy Bond, hatching a plot to kill every man in the world taller than 4’6”.) This adaptation is much more faithful, though it’s set in the present day instead of during the Cold War. Craig plays the MI6 agent who has just earned his Double O status when he’s sent to take down Le Chiffre (Danish actor Mads Mikkelsen), a terrorist financier and high-stakes poker player who’s trying to recoup some recent stock-market losses by hosting a poker tournament with a $10 million buy-in. MI6 enters Bond in the card game, hoping that he’ll win the big pot and bankrupt Le Chiffre, forcing the money man to give up his contacts in return for Her Majesty’s protection from his murderous and pissed-off creditors.

In keeping with the return to the series’ roots, the film is much more of a nuts-and-bolts action thriller, with a convincingly small-fry villain, an absence of spy gadgetry (something the last few films overdosed on), and a willingness to get dirty — when Bond realizes he’s been poisoned, he takes a glass and a salt shaker to the men’s room and swallows salt water until he vomits. Martin Campbell, whose credits include the 1995 Bond flick GoldenEye, isn’t the most stylish or imaginative director, but he takes quite well to stripping the franchise down.

The film’s trump card is Eva Green as Vesper Lynd, the banker who finances 007’s poker stakes and accompanies him on the mission to keep an eye on the money. Of course, she falls for him. New attitude or not, this movie doesn’t work if you don’t buy into the romance. You do, because the exotically gorgeous Green makes you believe she could bewitch even a man as guarded as Bond. You believe it because the two leads are such a good match, with both doing an excellent job of conveying erotic smolder underneath their coolly professional demeanors. In his novel, Fleming describes Bond as being fascinated by Vesper’s intelligence and essential mystery, and these actors make this relationship real. In Green’s presence, Craig relaxes just enough to give off the vibe of a man who’s not predisposed to happiness yet has found it anyway.

Alas, we all know that when Bond falls in love, it’ll end badly. The events here set 007 on a course for revenge and a sequence at the film’s very end that’s devilishly funny. Yet there’s a chilling truth underlying the joke. The smiling agent identifying himself with Bond’s signature line is a hollowed-out shell of a man who has little pleasure left in life aside from offing bad people. It’s painful to be a superspy. The same can’t be said, though, for the experience of watching this 21st James Bond picture finally make the franchise relevant again. That’s why Casino Royale comes up a winner.