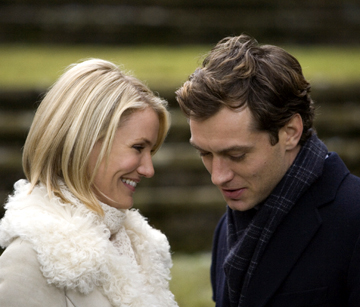 Leaving aside my previously stated objections to the term “chick flick,” I think calling her the queen of Hollywood movies aimed at women is premature at best. The Holiday is only the third movie she’s helmed since the breakup of her personal and professional relationship with husband and writing partner Charles Shyer. Like her previous films What Women Want and Something’s Gotta Give, it showcases some nice comic material before succumbing to fatal dramatic slackness.

That’s a shame, given the talent she’s lined up. Kate Winslet plays Iris, an Englishwoman whose job writing wedding notices for The Daily Telegraph cruelly reminds her of her own continued singleness. Meanwhile, Cameron Diaz plays Amanda, an American who makes her living editing trailers for Hollywood movies. Both women encounter severe romantic heartbreak in December, and after dealing with it in their own ways — Iris by crying all day, Amanda by screaming and throwing things — they decide they need to get out of town. They meet online at a web site that arranges for them to swap houses for Christmas, and across the Atlantic they go.

Meyers’ biggest accomplishment here is reclaiming Cameron Diaz from the scrap heap. Surely you remember how Diaz got to be famous, charming the world in 1990s comedies My Best Friend’s Wedding and There’s Something About Mary as an inventive physical comedienne whose skills came wrapped up in supermodel looks. Perhaps stardom was inevitable, but rather more evitable was what happened to her in the new century. Her persona hardened into aren’t-I-adorable shtick and turned her into a shrill parody of herself in The Sweetest Thing and the Charlie’s Angels flicks. Before you knew it, Anna Faris was impersonating Diaz in Lost in Translation, and it was funnier than any actual Diaz performance in years. Now, though, the laziness of earlier performances has evaporated. She’s gotten back to the basic strategy of reacting to her surroundings — when Amanda gets her first look at Iris’ antique bathtub, you can see her register that she’s going to have trouble fitting into it. Diaz is no less rewarding in the big comic set pieces such as the one early on when her ex-boyfriend has just busted her for her inability to cry, so she sits at her desk and tries. After some extended tearless sobbing, she straightens up, fixes her hair, and says, “Moving on …”. It’s gratifying to see the Diaz of old back, just when we thought she had gone for good. Hope she sticks around a while.

Elsewhere, the two women find romantic bliss in their new environments, Iris with scruffy film composer Miles (Jack Black), Amanda with Iris’ brother Graham (Jude Law). Reportedly Meyers wrote the script specifically with these four actors in mind. This is rare in Hollywood nowadays, to conceive a story for so many big stars and then to go out and actually get them. It’s sad to see her efforts bearing such little fruit. Neither of the couples has much chemistry, and Meyers doesn’t play to any of her stars’ strengths except Diaz. Law’s reduced to a bland charmer — barring one scene where he entertains some kids with a napkin over his face — and Winslet isn’t well served by such a soppy role. Black, meanwhile, fusses about with his line deliveries and tones himself down for the benefit of viewers who find the Tenacious D version of him to be a bit much. His energy helps blow some air into a movie that threatens to suffocate from good taste, but his hamming sticks out in the wrong way here. The part needed Philip Seymour Hoffman, and Hoffman could have used the part. 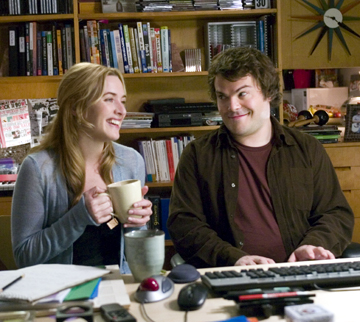 The lack of chemistry among the actors keeps The Holiday from being a great romantic comedy, but sharp direction and writing might have made it enjoyable to sit through. Unfortunately, the movie doesn’t have nearly enough of either to justify its 138-minute length. As in too many other romantic comedies, these characters feel the need to talk out every last one of their feelings. When Iris finally tells off the ex-boyfriend (Rufus Sewell) who’s been stringing her along, she does it in a deeply unfunny speech that takes at least two minutes when she could have just texted him something along the lines of, “Sod off, you bleeding wanker!” Instead of filling time with this stuff, Meyers should have filled it with comic business like the bit where a bored Amanda makes faces at Iris’ dog. This scene does nothing to move the plot forward, but it’s fun to watch. The movie needed more of it.

The script’s shortcomings are nowhere more evident than in an intriguing subplot that has Iris befriending Amanda’s neighbor Arthur (Eli Wallach), an aged former screenwriter who once worked with Hollywood’s greats. He turns her on to the classic romantic comedies from the olden days: The Awful Truth, His Girl Friday, The Lady Eve. Watch those films now, and you’ll see intelligent writing, economical direction, and big laughs like few comedies today offer. That’s the standard that The Holiday has set for itself, and it falls way short.