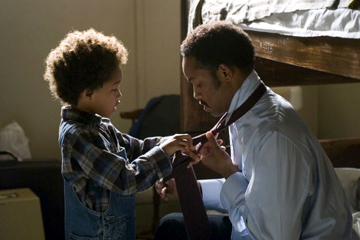 The Pursuit of Happyness is the sort of movie that usually triggers my gag reflex: a decorous little weeper with one of Hollywood’s highest-paid stars portraying a man mired deep in poverty toting around a cute little kid. Instead, the movie got to me.

It’s based on a real-life story good enough to make Oprah Winfrey wet her pants. Chris Gardner was a high-school graduate and Navy man who decided to make his fortune in the 1970s by buying a bunch of portable bone-density scanners and selling them door-to-door to San Francisco’s doctors. The expensive machines were regarded by physicians as superfluous, so the investment was a disaster. Broken financially and deserted by his wife, Gardner became homeless in 1981 and was forced to raise his young son Christopher while living on the streets. His deliverance came in the form of a six-month unpaid internship at Dean Witter & Associates, during which time he trained to be a stockbroker and competed against 20 other interns for the job that would save his life. (Like Gardner’s best-selling memoir, the movie takes its title from a sign Gardner saw that misspelled the word “happiness.”)

Will Smith seems like an odd choice to play this man. He’s never really done desperation. Why should he? His show business career has been that rare example of uninterrupted success, ever since his teens when he was a rap star. Back then, the “Fresh Prince” moniker fit him exactly — he was so cocky and talented and untroubled by his rise to the top. Now at age 38 he’s one of the world’s biggest movie stars, having shrugged off his one high-profile flop (1999’s Wild Wild West) to achieve box-office clout that no other African-American man has ever had.

So it’s surprising how convincing he is as a man who sees himself circling the drain. Outfitted in unflattering conservative (for the 1980s) suits and a hairstyle that features streaks of gray and a receding hairline, the actor for once looks like a struggler rather than a winner. Behind his chunky, black plastic-rimmed glasses, you can see the doubt creeping into his eyes as Chris contemplates the oblivion he’s facing. On the infrequent occasions when Smith has tried to stretch himself as an actor in the past — like in Six Degrees of Separation or Ali — you could always see the self-conscious effort going into his work. Not this time, though.

Overseeing him is Gabriele Muccino, the Italian filmmaker best known for his deeply irritating 2002 dramedy The Last Kiss, which was only slightly less annoying than the Hollywood remake starring Zach Braff that came out a few months ago. Here Muccino is only the director and not the screenwriter, and he takes the story at a leisurely pace without dawdling needlessly. The movie does drag a bit during the perfunctory scenes between Chris and his wife (Thandie Newton), but this is only a minor shortcoming.

More importantly, where other filmmakers might drown the material in treacle, he takes a blessedly restrained approach that brings out a piercing pathos in the movie’s emotional scenes, like when Chris gets Christopher to sleep in a train station men’s room by making believe that they’re cavemen hiding from dinosaurs. The same goes for the brief glimpse we have of Chris clutching his son during a church service at a homeless shelter. He doesn’t need to sing along; the proof of God’s existence is right there in his arms. Smith’s real-life son Jaden plays Christopher, and while little Jaden is no actor, the movie still turns his presence to its advantage. It’s hard to imagine Will Smith building up the same rapport with a trained kid actor.

This feel-good story carries an implicit critique of the system. Yes, Chris Gardner managed to pull himself up by his bootstraps through hard work and all that stuff, but how many others have his superhuman dedication, or the brainpower that allowed him to study and absorb the necessary knowledge for his job while he lived every day not knowing where he’d spend the night? Without preaching at us (and I’m looking at you as I say this, Blood Diamond), the movie starkly evokes the predicament of the working poor. For them, the sort of financial setbacks that you and I treat as minor annoyances are nothing less than catastrophes. Watching this man scrap every day with no visible gain to show for it at the end, watching him forgo lunch and bathroom breaks so he can finish his office work early enough to pick up his son from day care, I couldn’t help but think there must be something our society can do to level the playing field for these people. ’Tis the season to think of these things, and The Pursuit of Happyness is less an inspirational movie than one that makes you appreciate what you have.