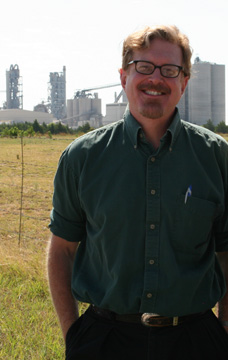 So when several Texas environmental groups looked at what they believed could be the tremendous negative impact of a passel of new coal-burning plants that TXU and other Texas utilities are proposing to build, they figured something more than press releases and protest signs was needed. And 11 of them went on a hunger strike.

Texas mayors and business groups usually don’t go in for hunger strikes — or for that matter, any kind of public stands against utility plant construction. But the TXU plan to build eight new coal-fired plants, in addition to another three proposed earlier, all within smogging distance of the already hazy Metroplex, brought them up short. In North Texas, where local governments are working hard to bring their region into compliance with air quality standards and avoid EPA sanctions, the plan to add tons more pollutants to their air sounded like a serious problem. So they formed a coalition to also oppose the plan. In fact, those fighting the coal plants now go far beyond the patchouli and granola crowd, to include chambers of commerce, legislators, and ranchers.

The proposed plants have also generated outrage well beyond Texas’ borders. Protesters as far away as California are worried that construction of that many coal-fired plants here — in all, 17 have been proposed by TXU and several other utilities in the last two years — could undermine the progress that they have made in fighting global warming. They point out that Texas already puts more carbon monoxide into the air than any other state, and that five of the nation’s top-10 power plant sources of mercury are in Texas, with a TXU plant topping the list.

Opponents are also crying foul over the push by Gov. Rick Perry — who has received substantial campaign contributions from TXU political action groups — to “fast-track” the regulatory review of the proposal. In addition to cutting down the time for public debate on the plan, the Texas Commission on Environmental Quality has also drawn criticism for holding multiple hearings on the same day and scheduling them during working hours — thus making it tougher for grassroots groups to attend. Critics also complain about stringent rules under which only those who live within 20 miles of a plant are being allowed to testify or take part in court actions — even though the energy companies will be given credits for pollution reduction up to 120 miles away from the plants.

“It’s a big deal,” said Paul Rolke of Franklin, president of a group called Robertson County: Our Land Our Lives. Decisions that are being hurried along now will have a lasting effect on the environment, he said. “We’re looking at a whole slew of dirty coal plants that are going to be around for the next 50 years,” he said. “And while they are in general going to meet the existing standards, that doesn’t mean they are safe.”

Besides Rolke, the hunger strikers included Karen Hadden of Austin, director of the SEED Coalition, and Diane Wilson of Seadrift. The trio lasted 10 days without eating, in order to highlight the seriousness of the potential environmental fallout from the plants.

“This is a crucial time in history,” said Hadden, who followed Perry around on his public stops during the hunger strike. “We are faced with very dangerous prospects for the future in terms of global warming. We have been doing all of the steps that you would normally take to protest this issue. We’ve been testifying in hearings, working with citizens, writing letters, and contacting legislators. But somehow, it seems that all of these coal plants that TXU is pushing are being rushed forward without any recourse. The situation warranted more dramatic steps.”

TXU Chief Executive John Wilder announced the proposal for the eight additional plants last April with Gov. Perry at his side. Perry used his powers to put the proposal on a fast track, cutting public review time from a year and a half to six months.

Critics believe that the stakes for public health in the region are very high. According to a study released in November by the Clear the Air research group, the sulfur dioxide and nitrogen oxide from the proposed plants could cause as many as 240 to 255 additional deaths each year. Some opponents charge that the energy companies are rushing to beat new, tougher federal environmental standards for power plants that could be implemented within the next couple of years.

TXU spokeswoman Kimberly Morgan was quick to point out that the proposed coal plants will replace older ones, thus reducing overall pollution. When 11 new units come on line, “because they are cleaner, more efficient, with newer technology, they are going to naturally displace older, dirtier facilities,” she said. “So when that happens, you’re going to see a neutral impact on air quality, so there won’t be any additional emissions added from those new units.”

However, Morgan did not say that all the older plants will actually be mothballed. She said some could be sold and others — perhaps all — could be retrofitted.

Some of the most prominent opponents of the coal plants are in a coalition of 17 mayors, formed last August and led by Dallas Mayor Laura Miller and Arlington Mayor Robert Cluck. Most of the organizations opposing the plants have very limited budgets, whereas the Texas Cities for Clean Air Coalition already has $500,000 to $600,000 and hopes to gather $1 million to spend on fighting the plan, Cluck said. “We have a lot of support,” he said. “People across Texas are beginning to see that we need to slow this process down and take a look at it more carefully. We don’t deny that we need power; we just need power that is not going to have a public health impact.”

State Rep. Charles “Doc” Anderson, a Waco Republican, has requested standing to testify about the plants on behalf of his 140,000-person constituency. And even the business-friendly Waco Chamber of Commerce, of which TXU is a member, is worried about the plants.

East Texas rancher Glenn Brinkman, who lives 16 miles from TXU’s Big Brown plant, has been given standing to testify. “Because of the acid rain caused by the sulfuric acid [from the plants], we have to buy these tons of lime to bring the pH level [in the soil] back up to where it needs to be,” said the 73-year-old, who is suffering from heart disease. “I’ve had two angioplasty surgeries, and I’ve had a heat stroke, and I believe that they [pollutants] were the cause. I just about lost my life. We didn’t know how dirty that plant was until we started looking into it.”

Morgan said TXU has already volunteered to cut the emissions generated by their plants by 20 percent across the board, “because we recognize how important the air quality is. … So when these plants come online in 2010, our total emissions will be 20 percent less than they were in 2005. We thought that was a pretty substantial commitment to make, and yet we’re still facing heavy opposition.” She said the company’s commitment to reduce its emissions will be met regardless of the outcome of the hearings.

Critics of the coal plants charge that Perry is pushing the proposal at least in part because of the $132,000-plus in campaign support he’s received from political action committees representing TXU and other utilities and from a retired TXU executive.

Also fanning the embers is the fact that TXU and TCEQ, the agency responsible for the permit process, have used the same consulting firm. Environ Corp., TCEQ’s top consultant on air quality studies, provided key testimony for TXU in the hearing for the Oak Grove plant in Robertson County.

The SEED coalition and the environmental group Public Citizen filed a motion requesting that TCEQ’s double-booking of hearings be halted, in order to give citizens a better opportunity to take part, but were turned down. TCEQ officials are also considering consolidating all of the coal-plant cases, and holding only one set of hearings for all of them.

The hearings are being coordinated by TCEQ Executive Director Glen Shenkle. Environmentalists and others complain that Shenkle arbitrarily relaxed the rules that normally require companies building new plants to use the best available technology for controlling pollution.

According to Morgan, TXU is already using the best available technology — and she said other allegedly cleaner technologies have not been proven reliable yet. She said TXU is on the forefront of developing new pollution-control technology, in addition to increasingly making alternative energy sources such as wind and solar power available.

TCEQ has also decided to base decisions on allowable emissions from the new coal-burners on a plant-by-plant basis, rather than calculating total emissions — and to exclude the plants from being considered in the region’s plan for reaching federal clean-air standards.

“TCEQ still considers the interests coming in for permits [to be the companies’] customer base, not the breathing public,” said Jim Schermbeck of Downwinders at Risk, another environmental group.

On its web site, TXU lists about 45 city councils, school boards, and other organizations that have officially welcomed the five-year, $10 billion project. Supporters say that the plants will generate much-needed power, which last year’s rolling blackouts proved necessary. They also point to the hundreds of thousands of jobs that the project will create. TXU, they note, is the only energy company making voluntary emission cuts.

Administrative hearings on Thursday will determine whether the fast-tracking will be allowed to proceed and whether all the cases can be consolidated.

Many, but not all, of the court and administrative rulings in the coal-plant debate have gone in the utilities’ favor. In a case brought by Rolke’s group against TXU’s Oak Grove permit, administrative judges ruled that the permit be denied, on the grounds that the plant could “cause or contribute to a condition of air pollution.” TCEQ commissioners, however, are not bound by the ruling and could still vote to allow the permit.

Rolke’s organization and the CleanCOALition just filed another suit against three TXU subsidiaries, to compel them to comply with federal standards regarding the implementation of best available technology.

Rolke said he knows the odds are against him and the other protesters. TXU and the other utilities “have an almost limitless budget,” he said. “They can put weekly or biweekly full-page ads in our local paper that are chock full of happy talk and pictures of grandpas and grandsons walking through flower-covered meadows. If you read their spin, it sounds like a good idea.

“That’s part of the reason to do a hunger strike,” he said, “to say ‘This is something that you don’t want to just look at the cover of. You might want to open up the book and at least read the preface, because it will scare you.'”

Hadden plans on giving Perry a lump of coal in a stocking, as an early Christmas present this Thursday. l

You can reach Eric Griffey at egriffey@hotmail.com.