Home Music Listen Up girlsRISEwithHEAT
SHARE
Facebook
Twitter
As the technology of musical production keeps progressing, so do the opportunities for artistic experimentation, and some artists continue to mix aspects of different genres into wholly new yet oddly familiar types of sounds. 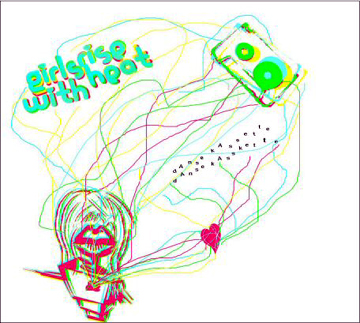 With an assortment of vocal effects laid over heavy synths, he sometimes sounds more android than man. But the human element doesn’t get lost among the bleeps, bloops, and static. Martin’s lyrics come from his personal experiences as a young dude dealing with young relationships. Hardly sappy, songs like “dear vanity” and “doctors got a thing for blondes” reveal honest emotional torment, anger, and a severe allergy to trust.

The five-song e.p. opens with microphone buzz, a not-so-gentle but quaint reminder that danse kasette danse is totally a DIY effort. A few seconds of fuzz later, and molten keyboards introduce Martin’s huge, tinny voice. Inventive rhythms drive then chill, setting aside space for thunderous effects and deep, electric insanity from a Roland synth. The following track, “miss medicated teen,” calms things down a bit by beginning with a synthetic looped hook. But then a techno-rock beat comes in and furiously blows amplified angst over demented, constantly varying electronic, bass-happy drumbeats.

Throughout the disc, which motors along seemingly non-stop at 90mph, Martin’s resistance to easy categorization is manifest in every hip-hoppish, post-hardcore, no-wave progression. No, you’ve never heard anything quite like it. Hopping madly from one genre to the next, Martin’s girlsRISEwithHEAT has the advantage of fishing through — and sampling — a long history of popular music.