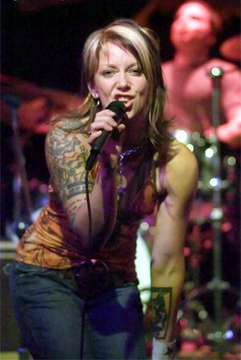 As a recent contestant on Rockstar, one of the dumbest reality shows in an infinite line of dumb reality shows, the Austin singer-songwriter wore out her welcome, to the chagrin of the other, more, as they say, “photogenic” contestants and the foppishly punk, youth-obsessed judges. With her belting Broadway pipes and boyish figure, Pike used her experience to her advantage. Most of the other aspirants to front Tommy Lee’s new band Supernova stressed their idiosyncrasies, like that Zyra chick who just screamed off-key the whole time. Pike simply sang the way she always has and hoped for the best. Having released three albums for major label Arista, she was a consummate pro, which no doubt explains why she hung around long enough to place in the final six of 15 contestants.

Pike’s only acquiescence to ageist propaganda comes in the form of miscellaneous, silly tattoos on her arms. But, hey: We wouldn’t expect her to stroll onstage in flip-flops, khaki pants, and a Race for the Cure t-shirt, right? No one’s that rock ’n’ roll.