Home Arts Stage Slavery’s Many Faces
SHARE
Facebook
Twitter
If you skipped the Rose Marine Theatre last Friday night, you missed one of the more, um, unique moments to occur in Fort Worth theater in quite a while: a sock-puppet play in which 19th-century methods of slave punishment were demonstrated, including tarring and feathering the strongest slave on the plantation, tying an arm and a leg of another slave to two different horses and then cueing the animals to flee, thus dismembering the victim, and a slavemaster sock ripping a slave sock to pieces in manic, vaudevillian fashion. 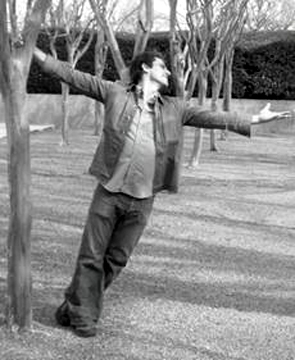 Despite the controversial implications, it was a disorienting mixture of horror and humor that 29-year-old actor-writer-director Adam Dietrich is proud of. Artistic director of the loose Fort Worth collective known as The Butterfly Connection, Dietrich has for four years now been a kind of itinerant theater artist, staging hard-to-classify multi-media performance pieces in theaters, school gyms, parks, and recording studios. The Willie Lynch Letters is a co-adaptation with co-star and regular collaborator David Conard of the hotly disputed 19th-century communiqués that surfaced in the early 1990s and gained wide exposure after Louis Farrakhan read excerpts at the Million Man March. The letters were allegedly written by a West Indian slavemaster named Willie Lynch and offered advice to American slaveowners on how to “develop” a loyal slave and stave off uprisings. Some African-American and Anglo scholars have dismissed the letters as fiction because of glaring historical inaccuracies, contradictions, and anachronisms. To Dietrich, whether they’re genuine or not is almost beside the point.

“When I read them, I was infuriated and satisfied at the same time,” he said. “By ‘satisfied,’ I mean I wanted to believe they were true. They documented how horrible slavery was, and so they became a kind of catalyst for throwing off oppression.”

While Dietrich’s childhood in Arlington was decidedly Anglo, middle-class, and comfortable, he does have some personal experience with other conditions that he brings into the story. He and Conard, an African-American, used their show to extend the idea of slavery into all kinds of areas: alcoholism (Dietrich was at one time a problem drinker, and at one point during the performance he pretended to be seriously sloshed); consumerism (the show featured floor-to-ceiling ad images of Gap models in nooses); and what Dietrich and Conard see as a generally middle-class fear of risk, change, personal intimacy, and communication. The Willie Lynch Letters weaves these disparate threads together nicely, but The Butterfly Connection deserves almost as much applause for taking on nutcrackers, Tiny Tims, and plastic baby Jesuses.

“Racism figures into the show,” Dietrich said. “But David and I say repeatedly [during the performance], ‘This is not a show about racism. It’s about slavery.’

“The Willie Lynch Letters talk about making black men mentally weak but physically strong,” to do their slave duties, he continued. “I thought about the different ways a white man could be brought up in very traditional, comfortable realms and still suffer from a similar mental slavery.”

Willie Lynch is, in some ways, atypical of what The Butterfly Connection has recently offered, material that, unlike Willie Lynch, resists being seen as pretentious or shocking for shock’s sake. Basically, he said, he mostly wants to create kinetic theatrical experiences for the 20-to-40-year-old crowd, a group that may be the most technologically tuned-in generation ever but who can’t sit still for the duration of a play. One of his mentors is Hip Pocket Theatre’s Johnny Simons, with whom he worked for six years on all aspects of live theater and with whom he shares one philosophy.

“You don’t have to wear big black boots and a long scarf to be an artist,” Dietrich said. “Just being a regular guy with something to say makes you an artist.” Not long ago, he adapted a 150-minute stage version of The Wizard of Oz, eschewing the movie script in favor of L. Frank Baum’s strikingly melancholy novel. He transferred it as close to word-for-word as time and budget would allow, and he claims that patrons were startled at how different the author’s original intentions were from the film everyone knew by heart.

The Butterfly Connection has seven productions scheduled at various venues for 2007. Dietrich and his managing director, Joshua Reeves, have pledged to work with professionals, non-pro’s, and even first-timers. Dietrich, who’s studied theater at CATS (Creative Arts Theater School) in Arlington, Southern Methodist University, and TCC, claims one of his biggest inspirations was a certain local actor-teacher who warned him not to try to kick-start his own theater company: “People will assume that you’re producing yourself because nobody else will produce you. That really pissed me off.

“I thought, ‘I want to see my plays produced onstage even if they suck,’ ” he continued. “That’s how an artist develops: by daring to make public mistakes. How many masterpieces can a person produce in one lifetime? We’re interested in working with people who have a story to tell.” For more, visit MySpace.com/thebutterflyconnection.