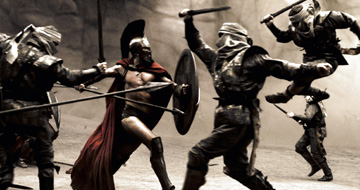 Style trumps everything. Style is what distinguishes one filmmaker’s cop thriller or bedroom farce or zombie flick from another’s. Style makes moviegoing fun. Case in point: 300, whose trailer arrested millions of moviegoers in theaters and online with its unique look, making it the “I gotta see this!” picture of the early season. Having seen it, I feel obliged to report that it’s pretty much an ordinary toga-and-sandals epic underneath all the visual dressing. However, the dressing by itself is enough to make all the difference.

The script is adapted from a graphic novel by Frank Miller and Lynn Varley, which re-tells the story of the Battle of Thermopylae in 480 B.C. Gerard Butler (with a pointy beard on his chin, hellfire in his eyes, and his native Scottish accent in full roar) plays King Leonidas of Sparta, a ruler who’s definitely not infirm of purpose — when the conquest-lusting Persians send an emissary to demand tribute from Leonidas, the king’s immediate reaction is to toss the messenger and his guards into a pit. Sparta’s religious oracles forbid Leonidas from using his army to repel the invading Persians, so he takes his 300 best fighters to stand against hundreds of thousands of soldiers at a narrow mountain pass, where the enemy’s numerical advantage will be worthless.

Once you absorb the opening scenes’ visual impact, you’ll notice a lot of filler for a movie that isn’t long at 117 minutes. The action picks up only during the first battle sequence, about 40 minutes in. Before that, we’re subjected to a grinding subplot about Leonidas’ queen Gorgo (Lena Headey) dealing with a fractious council stirred up by a crooked politician (Dominic West). Laced in with its red-meat battle cries such as “Spartans, eat a hearty breakfast, for tonight we dine in hell!,” the script features too much irony-free bloviating about the warrior ideal and how only Spartan men are true men. The sole touch of humor comes in the aftermath of the first battle, when Leonidas decides to meet with Persia’s King Xerxes (Rodrigo Santoro) — the Spartan says, “There’s no reason we can’t be civil” through a mouthful of chewed apple, while in the foreground his men are busy stabbing the wounded enemy soldiers to death. This bit sticks out like a spear protruding from a Persian’s chest, and I found myself wishing for more of the gleeful black comedy of that other cinematic Frank Miller adaptation, Sin City. Even if mythologizing tributes to valor and masculine virtues are to your tastes, Ridley Scott’s Gladiator conveys those ideas much more powerfully.

This movie could have been weak stuff had it been filmed more or less realistically like Gladiator. Thankfully, that isn’t the case. Director/co-writer Zack Snyder and cinematographer Larry Fong restrict their color palette to sepia, gold, silver, black, and red, and de-emphasize the background of the picture. The flat perspective gives the movie a strange, unreal look, as if one of those ancient Greek friezes or steles had come to life. (Snyder’s frequent use of slow motion during the combat adds to this impression. Filming violence in slo-mo is usually a hack’s trick, but here it’s necessary and even rather cool.) The lack of vibrant colors threatens to render the picture unwatchably murky, yet Fong prevents this by doing an insanely good job with the contrast — the camera picks up the flight of every snowflake, every burning ember, every drop of blood, every speck of dirt kicked up by the hooves of horses.

This helps immensely when it comes to the film’s many battle sequences. No matter how chaotic the action gets, Snyder (whose 2004 remake of Dawn of the Dead won over lots of fans who weren’t me) never sacrifices clarity. The armed confrontations here don’t match the ones in the Lord of the Rings movies for sheer scale, although we do get — almost as a throwaway bit — the sight of the 300 shoving three elephants bearing Persian soldiers over a cliff. The filmmakers concentrate on showing us the fighters adapting their tactics and fighting techniques to enemies on foot, enemies on horseback, enemies on armored rhinoceri, and enemies that are 7-foot-tall subhuman albino freaks with filed-down teeth and blades instead of hands. The director puts on a virtuoso display of finding inventive camera angles, which also helps keep all these battles from becoming repetitive.

The movie has its moments of wretched excess — the extreme war violence, the way the Spartans’ war gear shows off their rippling upper torsos, and the litter that carries Xerxes, which looks like a stage set for a Broadway musical number. Yet for all its eye candy and Tyler Bates’ rock-guitar score, the film achieves an antique feel that’s as appropriate as it is unlikely. By forgoing visual realism in favor of a look that seems molded from bronze, Snyder and company effectively force us to see this hoary cinematic genre in a whole new way. 300 is a movie we haven’t seen before, and that’s quite an achievement for this ancient story.