Home Arts Stage Flights of Fancy
SHARE
Facebook
Twitter
The Van Cliburn International Piano Competition has sifted through a lot of talent over the years, with most winners falling somewhere between the scholarly intensity of Radu Lupu and the sweeping romanticism of Olga Kern. But I doubt if any has the depth of musical awareness at such an early age as Alexander Kobrin, the 2005 gold medalist. 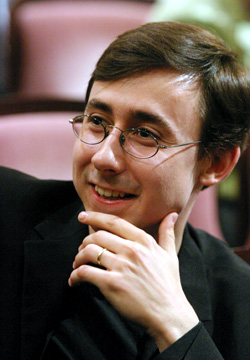 The 27-year-old Russian performed at SMU’s Caruth Auditorium last weekend, giving North Texans a chance to hear him solo without competition pressure. The program was remarkably out of the ordinary. There were no crowd-pleasers: no Chopin, Liszt, or even Beethoven. Instead we had Haydn, Mozart, the three intermezzi and E flat rhapsody opus 119 of Brahms, and the enigmatic Kreisleriana by Schumann. A tough row to hoe. Obviously Kobrin wasn’t interested in dazzling with technique, choosing instead to explore the mood and mystery that’s usually reserved for veteran performers.

A slightly built, studious-looking man, he shows no emotion in face or body on stage, instead creating drama through his music, bringing the notes to vivid life. Every measure flowed inevitably into the next, revealing inner warmth and hidden passions. There hasn’t been this kind of personal, introspective performance from a young artist since Glenn Gould hit the classical music world 50 years ago, with his joyous look at Bach possibilities on the piano over the harpsichord.

Kobrin began with a jaunty reading of a Haydn F Major Sonata that slid momentarily into reverie during its slow movement. It seemed a prelude to the Fantasy of Mozart, the following piece. A rambling work of loosely connected fragments, the Fantasy anticipates the longing melodies of Schubert, even as the thunderous specter of Beethoven looks on. The amazing thing is that the forte piano of Mozart’s time only hinted at the nuances implicit in the work. A modern concert grand gives the music full scope, and Kobrin’s kaleidoscopic command of tonal colors illuminated the music without intruding on the style.

The pianist closed the first half with the three Brahms Intermezzi, some of the composer’s last works, and again the mood was inward-looking. Kobrin seems at home tilling these fields. The heroic sweep of the Rhapsody was his only opportunity to reach out and stretch, and in true Russian style, his sound didn’t blur or take on a harsh edge — it just got bigger and more lush.

The whole second half was devoted to Kreisleriana, a collection of eight pieces depicting the title character in an E.T.A. Hoffman novel, a mildly mentally disturbed musician with whom Schumann, himself slightly over the edge, identified. The music doesn’t give up its secrets easily, and most pianists never find them, making for many a dull evening. Kobrin extracted the essence of each piece and the poetry that is uniquely Schumann’s. In the final section, with its fragmented, two-note, will-of-the-wisp phrase dancing all over the keyboard, he captured the early romantic land of fairies and goblins It was not the kind of music to bring concertgoers to their feet in rapturous applause, but Kobrin came out for three encores, and, tellingly, only one audience member left before the last. l