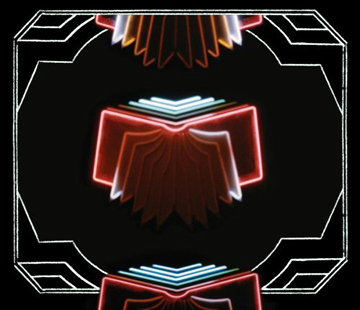 On the momentum of good reviews for Funeral, a reputation for putting on a great live show, and being a favorite among musical forebears like David Bowie, Arcade Fire outdoes itself here on what’s sure to be one of 2007’s best. Considering the title and frequent invocations of God and the church, the album serves as a sort of inverted religious offering, one of the few successful attempts at commenting on our times in the post-9/11 scene. Album opener “Black Mirror” aptly sets the framework for the next 10 songs, all reflections on modern life’s atrocities. And what Arcade Fire shows us is crystal clear: “Mirror, mirror on the wall / Show me where them bombs will fall.”

In light of such bluntness, the album never comes close to being as preachy as similar politically charged records. Whereas Green Day’s American Idiot suffers from childishness and sheer overkill, and the catchiness of Steve Earle’s The Revolution Starts Now is nullified by its dated lyrics; Neon Bible has a subtler, more artful, and, ultimately, more universal quality. The band tackles big targets here, sure, but all through personal stories. Unlike pop wankers The Killers, whose “homage” to U2 and Springsteen on last fall’s Sam’s Town was really highway robbery, Arcade Fire, which actually toured with U2, acknowledges the recent musical past while building on it. Harkening to Born to Run-era Boss, especially on “(Antichrist Television Blues),” Arcade Fire follows the tradition of epic storytelling and a driving sound in a way that The Killers could never imagine.

Lead singer Win Butler beautifully conveys the dilemma in which more and more everyday people are finding themselves. Those who pray to, and for, a heaven above are starting to notice hell on Earth. The predicament will not be strange to fans of singer-songwriter Josh Ritter. But where Ritter’s 2006 album The Animal Years saw faith as an answer, Arcade Fire’s Neon Bible respectfully loses it in the midst of turbulence. Running throughout the album is the theme of being trapped. “Windowsill” is an indictment of rampant warmongering and consumerism; the two have become nearly inseparable and are impossible to avoid. “My Body is a Cage,” which closes the album, concedes to the topsy-turvy times: “I’m living in age that calls darkness light.” This one song, however, is a part of a larger cry for freedom in a time when The Word — and world — has been perverted.-Zack Shlachter