Home News Metro Rebuilding the Bank
SHARE
Facebook
Twitter
A battered building, puny bank account, tarnished reputation, and a volatile and wily former employee still running around creating havoc are all hefty obstacles for the Metroplex Food Bank to overcome, but anything is possible when strong-willed Opal Lee is feeling like a phoenix. 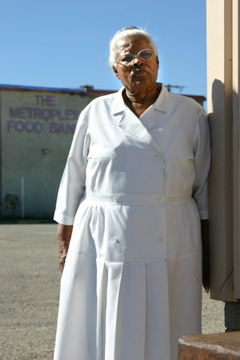 “We’re trying to rise from the ashes,” the 80-year-old Lee said recently. She was standing on the front steps of the fire-damaged building where the now-shuttered food bank closed its doors a year ago. “We had our problems, but we are going to surmount those.” Surmounting problems will require money and lots of it, and Lee is making a plea for donors and volunteers to help resurrect the nonprofit food bank that had served the city’s South Side for about 25 years before going down in flames. First, Lee needs $22,500 to pay for a temporary building that she convinced a mover to set on blocks in the food bank’s parking lot. The building came from a nearby school and would provide Lee with a place to reconnect with clients until the food bank’s warehouse and office building can be repaired. A recent bid to replace the roof and bring the 35,000-square-foot building up to code topped $400,000.

The food bank’s struggles first surfaced in 2002 when a small fire caused $15,000 in damages to the building, including a hole in the roof. Under former Director Sharon Hogan, repairs languished, the roof leaked water, and health inspectors noted the wet food items. That same year, an inspection uncovered moldy and thawing food in a faulty freezer. About 100,000 pounds of food had to be destroyed. Hogan, as she had done in years past, lamented the food bank’s woes to the news media, prompting stories about the need for donations. Private contractors repaired the roof and replaced the freezer at no charge, and people sent in numerous donations, including $25,000 in cash from a national corporation. Hogan didn’t mention in those interviews that she was a one-woman wrecking crew, serving as both director and chairwoman of the board, resisting oversight, failing to pay taxes, and spending much of the nonprofit’s money on administrative costs, including her own salary of more than $100,000, rather than on programs.

Another fire broke out on July 11, 2005 and ruined an estimated $100,000 worth of food in the warehouse. The Fort Worth Fire Department deemed the fire an accident caused by an overloaded electrical outlet. Again, Hogan pleaded for public support and received positive press in area newspapers and tv news shows. But the reports and even the fire investigation overlooked something — a week earlier, a health inspector had noted numerous violations such as insects and feces in food items and had marked for destruction the warehouse’s entire contents. A health inspector was set to return on July 11 — the day of the fire — to make sure the food had been destroyed.

Hogan’s clashes with health inspectors and failure to fix problems resulted in a referral by the state health department to the Texas attorney general’s office for enforcement of sanctions for health violations, prompting the state to threaten to take over the charity and put it into receivership. During that time, Hogan refused to provide Fort Worth Weekly with the nonprofit’s federal financial documents, which law requires tax-exempt organizations to provide on request. “I don’t need the bad publicity right now,” Hogan said at the time. In November 2005, Lee defended Hogan, saying the executive director had proven herself a worthy leader for two decades and deserved a chance to rebound. But the subsequent Weekly story (“Crumbs in the Cupboard,” Nov. 9, 2005) and continued pressure from the attorney general prompted Lee to demand Hogan’s resignation in January 2006. The demand fell on deaf ears — Hogan refused to be terminated, changed the locks on the nonprofit’s doors, emptied the bank account, took mail, hid files, and continued to solicit donations that never made it to the food bank, Lee said.

Hogan has since been stripped of access to the building and barred from retrieving the nonprofit’s mail or accessing its Wells Fargo bank account, although Lee said Hogan has opened another account at another bank and continues to solicit money. Hogan did not respond to the Weekly’s interview requests. Metroplex Food Bank’s checkered past might hamper its efforts to raise money this time around. And the amount needed is staggering — about a half million bucks for repairs, debts, and back taxes. Yet Lee remains confident and invites any prospective donors or volunteers to come check out the operation. “If they want to come down and see what we’re doing, we’re here on Saturdays cleaning,” she said. “Our books are open. We can stand up to scrutiny.”

Donations of food continue to trickle in, and Lee has been making weekly home deliveries to several dozen families. The food bank’s phone number (817-924-3333) and web site (www.food-bank.org) remain the same, and people continue to call and ask for help. Also, Lee has found someone to replace Hogan as executive director: Regena Taylor, who has expertise in business marketing and community volunteerism and experience at food banks. “She’s worked for nonprofits and has a passion for it,” Lee said. Tarrant Area Food Bank Executive Director Bo Soderbergh worked with Taylor while she was president of Tarrant Area Community of Churches, and he thinks highly of her. Soderbergh’s organization would love to see Taylor succeed, not the least because negative stories about the Metroplex Food Bank frequently cause his much-larger regional food bank problems with people who confuse the two.

“She is a very capable person,” he said. “In the capacity that I’ve known her, she’s been great.” Metroplex Food Bank has an ideal location near Riverside and Berry streets, with bus service and easy access to I-35, and could once again provide a welcome service to the area neighborhoods, Soderbergh said. However, challenges abound. “The building is a shambles,” he said. “It’s a daunting task.” Overcoming the past and winning back the trust of donors won’t be easy, but it’s possible “if you have a very specific strategic plan and a board of directors in place and you’re creating the relationships you need,” he said. “The funding community is going to ask a lot of tough questions.”

Taylor has spent weeks talking to the Internal Revenue Service and straightening out Metroplex Food Bank’s tax problems. Hogan hadn’t paid payroll taxes for several years. “You can’t move forward until you catch up with whatever you owe in taxes,” Taylor said. Eventually Lee wants to give Taylor a salary and let her run the organization full-time, although Lee will continue to chair the board and keep an eye on operations. In the past, Hogan served as director as well as board chairwoman, acting without oversight. “The board has learned a lesson — you don’t give total power to anyone,” Taylor said. Whether or not local volunteers and donors will give Lee and Taylor another chance remains to be seen. “It’s a huge challenge just to develop trust again,” Taylor said. “People know Sharon Hogan is out now. Still, it’s going to be an uphill climb. For people who know me in the community, my integrity speaks for itself.”