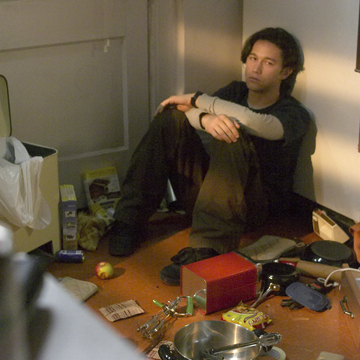 To be sure, this film is a thriller much like many others that have come before it, and it breaks no new ground, nor does it build to any sort of grand climax. However, it is also exquisitely crafted with careful attention to character and believable plot twists, and because of this it’s an eminently satisfying genre picture, a lowbrow flick that packs a lot of guilt-free entertainment.

When we first see Chris Pratt (Joseph Gordon-Levitt), he’s a high-school hockey star, and a god in the small Kansas town where he lives, until his charmed life comes crashing down when his reckless driving kills two of his friends. Four years later, he’s a night janitor in a bank, burdened by both guilt and brain damage that has left him narcoleptic and prone to unprovoked fits of uncontrollable crying or laughter. His short-term memory is leaky, and he has trouble sequencing events — when he tries to tell the story of Goldilocks and the Three Bears, he has to start at the end and work his way back. All this makes Chris totally reliant on his blind roommate Lewis (Jeff Daniels) to get through each day.

In recent years, we’ve seen a number of accomplished thrillers with protagonists who are mentally handicapped, whether it’s by short-term amnesia (Memento), post-traumatic stress (Conspiracy Theory), schizophrenia (The Caveman’s Valentine), Alzheimer’s (The Memory of a Killer), or chronic insomnia (uh, Insomnia). These characters are drawn into situations that would tax the resources of people with fully functioning brains, and watching them try to think their way out of trouble despite their impairment is what makes these movies compelling.

That job is made much easier with an actor of Gordon-Levitt’s formidable talent. In the prelude and a few flashback sequences, he plays Chris as a trash-talking BMOC who skates like he owns the ice, but he’s just as convincing as the timid post-accident custodian who’s afraid to walk through a room without knocking something over or forgetting why he’s there. This is a new challenge for the star of Mysterious Skin and Brick, movies in which he portrayed characters who were remorselessly driven, and Gordon-Levitt is more than equal to it. Through the character’s hesitancy he shows a few flickers of the old Chris in an early scene where he openly flirts with his counselor (Carla Gugino) to avoid discussing his mental problems. The actor is at his low-key best during moments when Chris’ disordered mind suddenly clicks — he knows something’s wrong when Lewis is supposedly home alone and the lights are on.

Little details like these are what make the movie’s crime plot resonate. It unfolds when Chris runs into Gary Spargo (Matthew Goode), a guy who was three years ahead of him in high school. Gary gives Chris a friendly ear for his troubles and sets him up with a girl whom Chris only gets to know by her stage name, Luvlee Lemons (Isla Fisher). Lewis’ reaction to her name is, “I assume this is the sort of stage that comes with a pole.” Because Chris’ head isn’t right, it takes a while for him to see that she’s part of a plan to set him up to act as a lookout for the robbery that Gary’s planning, which targets the bank where Chris mops the floor.

The film marks the directing debut of Scott Frank, a longtime screenwriter with an enviable resumé (Get Shorty, Out of Sight, Minority Report). His script stumbles a bit when it comes to the women here — the one-scene role of Chris’ counselor feels abortive, and Luvlee completely vanishes from the film about two-thirds of the way in, before the bank heist gets under way. Other than that, Frank excellently handles his mostly unheralded cast, especially Goode, previously known as a debonair British actor in lightweight Hugh Grant-type roles in Match Point and Imagine Me & You. Here he’s completely in his element as a menacing, scuzzy American with tattoos and a buzz cut. Meanwhile, Daniels gives the film a bracing shot of attitude as the sarcastic Lewis, whose precisely drawn friendship with Chris is one of the movie’s best features.

As a director, Frank doesn’t showboat in an attempt to establish a unique style. Instead, he keeps the film close to the ground at all times, concentrating on the deft unspooling of the plot while occasionally stopping to take in the hushed, snow-covered beauty of the Kansas plains (actually, Canada) that serve as a Fargo-like existential backdrop to the action. The scene with the bank robbery going wrong is well enough executed to do an experienced filmmaker proud, and the way Chris finally gets the drop on the robbers is both ingenious and true to character. The Lookout is a Hollywood product, but its spirit is entirely indie, proving that a well-written script, tight direction, and good actors are all that’s needed to make a riveting thriller. It’s a point that other mainstream filmmakers should definitely take.