Home Film Film Reviews 36 Weeks Later
SHARE
Facebook
Twitter
For months, Knocked Up has been the subject of deafening internet buzz, hotly anticipated as the funniest movie of the summer, or even the entire year. 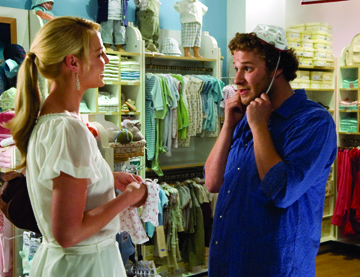 I generally do my best to ignore the chatter, yet I still had good reason to go into this movie with high expectations. That’s because the movie is from the same writer/director who made The 40-Year-Old Virgin, a movie that left me exhausted from laughter. I expected that Knocked Up would inspire a similar reaction in me. It didn’t, and that’s why I feel disappointed, even though this genial and occasionally off-color comedy is far from a bad movie. The film begins with 24-year-old E! Channel production assistant Allison Scott (Katherine Heigl) receiving a promotion to on-air reporter. Flushed with success, she celebrates by going to a nightclub and hooking up with a guy whom she’d pass by under most circumstances. He is Ben Stone (Seth Rogen), a paunchy, unkempt slacker living off an insurance settlement from a years-ago car accident. He loves his unemployment and is working on a doomed idea for a moneymaking web site that’ll allow him to continue his sleep-until-noon lifestyle. So he’s knocked for a loop two months after his one-night stand with Allison, when she calls him back to inform him that she’s carrying his baby.

Writer/director Judd Apatow has always been strong on male camaraderie, and the funniest bits here emanate from Ben’s interaction with his circle of slacker friends Jason, Jay, and Jonah (played by Jason Segel, Jay Baruchel, and Jonah Hill, respectively). Their conversations are sparkling beer- and pot-addled gabfests on topics ranging from whether Allison should get rid of the baby to why they hated Steven Spielberg’s Munich in the theaters but now love the movie on DVD. These scenes display Apatow’s flair at capturing the way guys tease each other and ride a joke into the ground as part of the whole male-bonding process, as well as his handle on the Jewish humor of a younger generation. In addition to these, there are a plethora of other funny characters — like the best comic filmmakers, Apatow doesn’t rely on his leads but rather spreads out the laughs among his supporting players. Thus, Allison’s sister Debbie (Leslie Mann) launches a profanity-laced rant at a nightclub doorman (Craig Robinson) who won’t let her past the velvet rope, only to stand by helplessly as the doorman takes the scene in a wholly unexpected direction.

There are other tasty turns from Charlyne Yi as the least lucid member of Ben’s stoner circle and Kristen Wiig as a colleague of Allison’s who’s remarkably bad at repressing her jealousy. Even Ryan Seacrest (portraying himself) gets to throw a memorable hissy fit directed at shallow show business celebrities. So what’s wrong here? For starters, a lot of screen time is devoted to Debbie’s strained marriage to a guy named Pete (Paul Rudd), who becomes friends with Ben. Apatow appears to be airing quite a few stored-up observations about marriage in this subplot — Leslie Mann is his real-life wife, and their real-life young daughters portray Pete and Debbie’s kids. It’s funny and absorbing and played quite well by the two actors, but it seems to belong in an entirely different movie. Pete’s crappiness as a husband doesn’t resonate with Ben’s storyline, and their family situation doesn’t shed any real light on Ben and Allison’s. It would’ve been challenging if the two main characters had gone through all the childbearing stuff and then decided they were fundamentally incompatible with each other, which by all rights they should be.

The two leads don’t have enough chemistry to convince us that a serious relationship might work. Nor do either of the actors seem at ease in a lead role, though Heigl is gorgeous and Rogen is funny. Allison’s misgivings about her pregnancy possibly derailing her on-camera career is a promising subplot that’s dealt with too easily. The movie also goes the way of too many slacker comedies by having Ben buckle down and get a real job. While I have nothing against getting a job, I find these movies much more satisfying when the slacker figures out a way to turn his slacker obsessions into something financially viable and intellectually stimulating, like in High Fidelity and The School of Rock. (This brings up a question: Do I find those movies more satisfying because they bear a certain resemblance to my own life? Hmmm.) All in all, the movie tells you surprisingly little about what it’s supposed to be about. Instead, it lapses disconcertingly into fuzzy platitudes — so having kids changes your life? Do tell! Apatow’s hardly the first filmmaker to go all gooshy on the subject of kids after becoming a father himself, but with his comic talent and flair for character, you’d think his movie would be more insightful about impending parenthood than Shrek the Third. Then again, Knocked Up has better jokes. That means a lot, even if this movie could have meant more.